Two suggestions for gifts which I highly recommend: 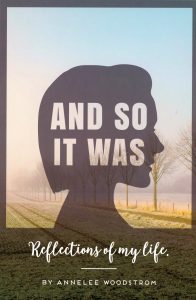 It was my great good fortune, in May, 2003, to read a column in the Fargo (ND) Forum about Annelee’s first book “War Child. Growing Up In Adolf Hitler’s Germany“, in May, 2003. She was, then, my present age. I bought the book, which captured my attention. A couple of years later I helped her with her second book, “Empty Chairs”, about her life in the U.S. beginning in 1947. It was also very interesting.

In the past year, at age 90, Annelee finished her third book, “And So It Was”, this a 195 page summation of a life well lived in Germany in time of WWII, then in postwar United States. I think you will find “And So It Was” to be a delightful read, and excellent for book clubs. She describes life as she lived it (ex. Chapter 13: Spring and Childrens Games) which evoke memories for the reader. The book has near 100 photographs and illustrations to give a rich visual sense of her life, especially in 1930s Germany.

Annelee saw the worst, and made the best of it. She was 19 at war end in Germany and walked, starving, over 70 miles from Regensburg, where she worked as a telegrapher, to her home in Mitterteich, a few miles from present day Czech Republic. Her father, who refused to join the Nazis, was conscripted into the German military, and the family believes he died in Russia. He was a road engineer.

Her “gentleman soldier” husband, Kenny Woodstrom, died not long after the harrowing great flood of 1997 did great damage to their home and community in northwest Minnesota.

Annelee is ‘alive and kicking’ – we saw her within the past week. “And So It Was” is worth a read. Here’s the order form: Annelee books001

2. THE WORLD IS MY COUNTRY is a film about World Citizen Garry Davis; a film about how an individual can make a difference.

This is a film, near release, but still about $50,000 short of funds needed for full roll-out. I highly recommend a financial contribution, in any amount, to this film. Details here, click “Join the Wave”. It would be of special interest to anyone partial to peace and justice and cooperation among nations.

I first learned of Garry Davis and the film idea in 2011, and was enrolled when I showed a very early version to a dozen high school students the following year. I wondered if kids would relate to a 90 year old man telling his story about what he did in his 20s and 30s. The students watched very attentively, and gave this first rough draft high marks. It includes much rarely seen archival film, including of the first sessions of the United Nations in Paris.

I’ve seen the film 11 times since, in assorted settings, in front of assorted groups, most recently Nov. 11, 2017. A group I’m part of sponsored its World Premiere in Minneapolis in April, 2017, at the International Film Festival, and it was very well received.

But films such as this, in addition to incredible time and effort, take money to complete. You can help. Consider contributing to a film that will be timeless. Questions? Ask. dick_bernardATmsnDOTcom. 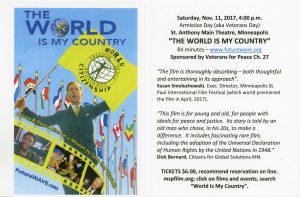 Finally, a small suggestion: Those who know me know I hate to shop. Today is called “Small Business Saturday“, a niche for the smaller businesses to get a share of the mega-bucks spent for the holiday season. Both of the above items are part of small business, worthy of support.