Recommended reading: The Age of Anger by Pankaj Mishra.

Sometimes it may be useful to consider a problem from a different perspective.

With all the justifiable horror of Charlottesville, I have been noticing, within my own circles, increasing attention to being positive; to be, as most of us have found most ordinary Americans to be, very positive people, accepting and generous – inclusive, not exclusive. A part of a global community, not an isolated island. Individual positive actions make a very large difference.

In the last couple of days I have seen references to a time about 100 years ago which showed us reverting to our worst – the Jim Crow era – and I want to offer an old book found in a shed as food for thought. (Here’s more about “Jim Crow”.) 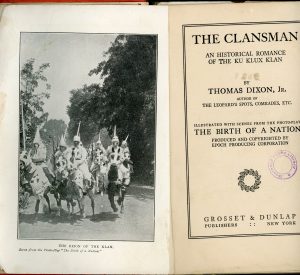 From the Birth of a Nation Reprint of the 1905 book, The Clansman

Recent talk has been about President Woodrow Wilson (1913-21) who had a particular affection for segregation. It was during his term that the racist film, Birth of A Nation, hit the screen. The silent film played in the White House.

You’ll notice that Woodrow Wilson was Democrat; and Jim Crow Laws were passed by Democrat legislators in primarily the deep south. Abraham Lincoln was Republican. We are often reminded of this. The shift in ideology (policies of exclusion shifting political party “sides” as it were) happened fairly quickly, most likely in the 1950s.) A pioneer in this shift was Minnesota’s Hubert Humphrey in the late 1940s. Civil and Human Rights became largely a Democrat thing, and still is. The Party of Lincoln is now the Democratic Party….

We, regardless of party, like to pretend we’re insulated from racism – we’re not racist – but it’s helpful to be honest about this.

Out on the old North Dakota farm, amidst the junk, I found a book with an intriguing title, The Clansman (frontispiece of the book is in the photo above).

The Clansman is probably still available, and I’ve encouraged people to read it to get a taste of those horrid old days post-reconstruction. It is a nasty book, not pleasant reading, but very instructive particularly in these mean times exemplified by Charlottesville, Virginia.

The whites – the slave owners – were terrified of free blacks, seems the essence of the message of “The Clansman. What would happen now that slaves were free? Today, of course, our national leader has ginned up fear of others, generally: “Immigrants”, “Muslims”, “Mexicans”…. If you’re in one of these target classes, you know the feeling of contempt and fear. If you’re not – like myself – it is much harder to appreciate being excluded.

The ND farm “Clansman” was a re-publication, in about 1915, of the 1905 book. It was published during the Woodrow Wilson administration, most likely in conjunction with the release of Birth of a Nation (1915), since it includes some photos from the “photo-play”.

How did this old tattered book get on the farm? Why was it kept, to be found in 2015 in a shed? Lots of questions without answers, as all of the residents of the original farm are dead and gone.

The book was once property of the Moorhead (MN) Public Library about 120 miles away, and there is only one indirect family tie I know of there. Beyond that, everything is speculation.

Somehow or other, the fact of the matter is that The Clansman spent the better part of its 100 year history on a small farm in rural North Dakota.

The direction our country goes from this day forward is up to we citizens – every single one of us.

We’re the only ones who can redirect. A large part is who we choose to elect to U.S. Congress, state Legislators, Governors, etc. The heavy lifting has to be our own, much more than lamenting or complaining.

There’s plenty of information available about the problem. I highly recommend the Southern Poverty Law Center site. It has a long history of following hate in the United States.

Meanwhile, each day I am more and more aware of how kind people are being to each other…. I don’t think it is my imagination. I have taken time to notice.

It is time for some creativity to work to tamp down the cancer of racism which is, thanks to the current President, out of the shadows, a festering wound. Change happens by action of individuals, one positive act at a time.

Our entire national history is rooted in slavery: we’ll probably never eradicate this part of our national DNA, but we certainly can tamp it down, starting with ourselves.

COMMENT: Just a couple of data points relating to the shift to the GOP by the Jim Crow advocates, who when I was growing up were referred to as the Southern Democrats. When Ike was in office, these southern racists were firmly in the Democratic Party. After the passage of the Civil Rights Act, there was a significant movement by these folk to the GOP, largely during the 1968 elections. The most significant movement took place in 1980 by those referred to as Reagan Democrats. Those folks now call themselves Evangelicals, and they are the homeland of the majority of the KKK chapters. They make up approximately 17% of the nation population. Combine that with the 9% of moderate Republicans and you have the 26% of the population that currently make up the GOP base.

Another interesting point that I’m sure you are aware of is that Trumps dad was a Klansman. He participated in a 1920 or 1924 demonstration march. They didn’t dare go into New York, so the chose to do the march across the bridge in New Jersey.

Related: Just Above Sunset summarizes the last few days at the White House. 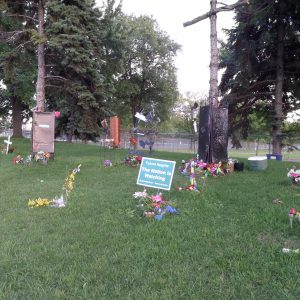 I was in Roseville for a meeting on August 10, and had a few minutes, so drove over to nearby Falcon Heights to my old neighborhood to see the site where motorist Philando Castile was shot during a traffic stop a year ago. The police officer was recently acquitted of wrongdoing in the tragic incident, which involved guns. I’m of the mind in this situation that the ease of access to guns made the incident more likely. I wrote about this here.

This incident does not relate at all to Charlottesville, except that fear and race quite definitely entered into the equation. I urge dialogue. 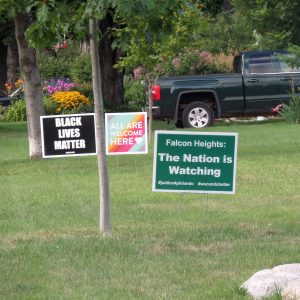