What candidates and issues are on your Nov. 8 Minnesota ballot? Check here for specifics.
Last night, Oct. 25, I went to the local League of Women Voters “Meet the Candidates” Forum in Woodbury. The Forum was divided into two parts: 1) the six candidates for State Senate and House of Representatives; 2) the ten candidates for two Woodbury City Council seats.
I stayed for part one. I’m at the end stages of a bad cold, so left before part two.
The Monday Forum, and others, are available for viewing here.
Woodbury is a city of near 70,000, and Minnesota legislative districts are about 80,000 population. No candidate can be expected to marshal a campaign to knock on every door, or even a large fraction.
The Forums are an effort to give interested citizens a small amount of actual face-time with the candidates.
Candidates for State Legislature
In our case, the local league ran the one hour session expertly, tightly managed. All of the candidates were polite (five women, one man, for three positions).
I would guess that there were 100 of us in the room; nothing raucous from the audience, polite applause for all at the end. Audiences, real people, are important.
Each candidate could make an opening and closing statement, and all were asked to respond to 6 questions. The session was one hour: 10 times 6 = 60 minutes…and there’s opening and closing. That’s less than a minute per round per person.
It seems odd, but even that brief time can give one a sense of a candidates knowledge, demeanor and general feelings about the few issues raised.
But you also become aware of how complex the job of a state legislator is.
The people we send to St. Paul in January have to be quick studies, willing to work very hard, and have a great commitment to not only their constituents, but to the entire state and indeed our nation. There are no ‘easy’ questions in their positions. They run, willingly.
City Council, and other Down Ballot.
The candidates and issues “down ballot” are all very important. You don’t see TV ads or lawn signs about them. These are not glamorous jobs, and local politics can be very mean and nasty. If you’re in a dysfunctional town, you know it, and the town suffers. We seem fairly lucky here in Woodbury, but how to go about deciding between ten people for two positions?
As I mentioned, I did not stay for part two.
As I was leaving, a young woman approached me and introduced herself as one of the candidates for City Council. She gave me her card. She made a very positive first impression. The issues she raised with me resonated positively. She had no idea who I was.
(click to enlarge) 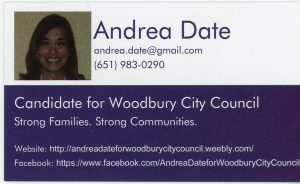 Are others of the ten better than her? She earned a head start in my book!
Between now and when I vote, I’ll seek to find my two choices by asking people I know if they have specific recommendations for the City Council. These are people who pay more attention to local politics than I. As a matter of course I don’t vote for candidates I don’t know, (except incumbent judges which are a separate category).
Other offices/issues
My ballot shows one candidate for County Commissioner. An incumbent, the incumbent has always seemed to do a good job. Easy choice.
There are three candidates for Soil and Water Conservation District Supervisor District 5 Washington County: My choice is George C. Weyer. I had no idea what this office was about until a chance meeting with Mr. Weyer some years ago. Check out the website (linked above).
Finally, there is a Constitutional Amendment on the Ballot which “removes legislators power to set their own salaries, and instead establish[es] an independent citizens-only council to prescribe salaries of lawmakers.“
It sounds so innocent and obvious. But I’ll very likely vote no. There are too many questions about what “independent citizen’s only” means. Too much potential for mischief to be made. The job of Legislator is very important, too important to be left to potential whim and caprice. Under our system, lawmakers should continue to make laws, one of which is their compensation. There are a great plenty of ‘checks and balances’ within their own membership to take care of problems.
Take your vote seriously November 8.