Two weeks ago we toured the newly renovated Minnesota State Capitol building. Renovation of the now 112 year old facility had been needed for years. Of course, renovation costs money, which means politics, which means delays, which means higher costs, which mean political advantage (or disadvantage). But that’s another story.
This is about a light bulb.
We entered the Minnesota Senate Chamber to see a “drama-in-progress” (photo below, click to enlarge).
A workman was replacing a light bulb in the rotunda of the Chamber.
(click to enlarge the photos) 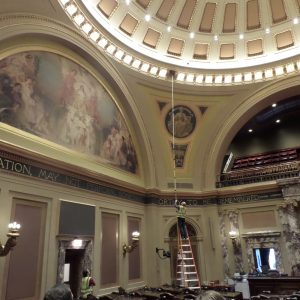 I can’t speak for my fellow visitors, but I hardly noted the excellent guide and her associate, a current Minnesota legislator, as they talked about the newly refurbished chamber.
I was watching this skilled workman, and his “sideman” off to the left, as the bulb was removed, and then replaced.
As easily noted, one missing bulb stands out.
Of course, this brought to mind one of the variations on the very old joke: “how many [government employees] does it take to replace a light bulb?” Well, in this case, two were visible.
But where in the wings are the others? The people who ordered the light bulbs, who stored them, who make decisions about them – on and on.
I sent the photo to three friends who are engineers, corporate types, and, of course, I got the expected responses (they know I’m a retired “union thug”).
We had a little bit of fun with this. One of them wondered if these bulbs were energy efficient LED bulbs. Well, from my perspective on the floor, I didn’t know. And it hadn’t occurred to me to ask the question. Just watching these guys work was a great plenty for one day! I was glad I wasn’t on the ladder.
But, I’ve always been curious about such things, so the question nagged at me. I couldn’t find the answer in the routine ways, so the following Friday I went back over to the capitol, and asked the people staffing the capitol tour desk.
The quick answer was, yes, that the bulbs were in fact LED. Of course, they are ordered in large quantities, and on occasion there is a bulb that is defective. It may work, but might be a bit quirky, perhaps flickering.
The staff member also mentioned that the bulbs, which occupy the same spaces as their predecessor bulbs for all these years, were too intense, if at full wattage, so much like the dimmer switch at home, the power is tamped back a bit.
He also volunteered that there remain other examples of lighting in the Capitol which are not amenable to LED. Some fixtures still use fluorescent, he said.
So…I ask myself…were we looking at government waste, or efficiency, that February day? Or does it really matter. Down below that rotunda a large number of committed citizens, State Senators, debate the large, and sometimes very small, issues of the day and help make our state one that works pretty well, mostly, including through power shifts.
So, “how many [people] does it take to change a light bulb?”
I would say, all of us.
Have a great weekend. 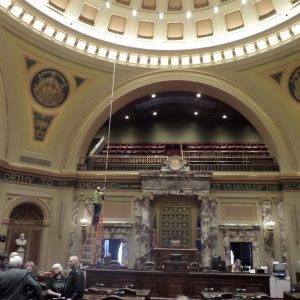 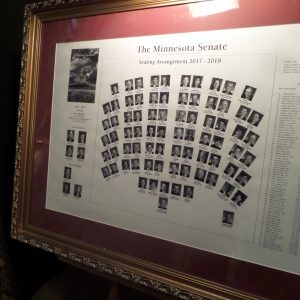 The occupants of the State Senate Chamber, 2017 session of the Legislature.