We were at the St. George’s Middle Eastern Festival in W. St. Paul yesterday. It continues today, noon to 10 p.m., and Sunday noon to 6 p.m. Here’s the website, and schedule of events: St. George Festival001. I’m very tempted to go back. A few thoughts from yesterday. (St. George’s is just south of Butler, between Robert and U.S. 52 in West St. Paul.)

Yesterday, our friend, Don, 88, expressed an interest in going to a church festival in a neighboring suburb, West St. Paul. It was a good idea, and a nice day. Don’s objective: to ride a camel, for the first time in many years. He felt he was up to it (he was), and off we went.

We were early, and went inside the Church which includes a display of icons. A parish member was there to supervise and answer questions. I had noticed that the Church labeled itself as Saint George Antiochian Orthodox Church. I had a general idea of Antioch, and Orthodox, but asked the gentleman about Antioch and by extension “Antiochian”. Were the two related? Why “Antiochian”?

This was not a new question to the guide. He asked were we generally aware of Turkey and the Middle East? Surely. More or less at the elbow, where Turkey and Syria meet, is the city of Antioch.

(On the below map, note generally where Smyrna and Syria come together).

It was Antioch where this branch of Christian Orthodoxy began, but largely due to too frequent earthquakes, the headquarters of the Church was relocated to Damascus, Syria. “Damascus” brought up an obvious question from one of us, about Syria today…. 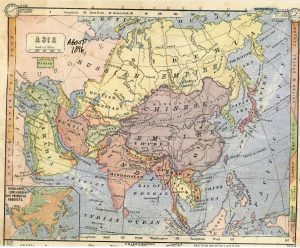 But before that, here’s an article about Antiochian Orthodox.

The mere mention of “Damascus” brought a rapid fire, very civil, series of “one-liners”, overlooked by the assembled icons on display below a photo of the founding group of the local congregation back in the 1920a.

Damascus brought up the current Syria issue, which brought up Isis, which brought up Iraq and Saddam Hussein’s relatively benign treatment of Christians, and Mosul, and the Ottoman Turks and the Armenian genocide, and Ottoman Empire (basically the green portion of the 1896 map) and on and on an on. Into the mix came powerfully the less than helpful impact of powerful religious ideologues of all religions. And also into the mix came the issue of the French and British partition of what is now the Middle East in the wake of WW I: Sykes-Picot is how that is often characterized.

None of us were there to solve the middle east, or any other problems.

We were there for a camel ride, and it went well – Don can now cross it off his bucket list, to add to his real-life experiences with camels when he was much younger and a visitor to over 50 countries in the world (including Algeria and Morocco, where the previous rides took place).

But that brief conversation sticks in my mind. 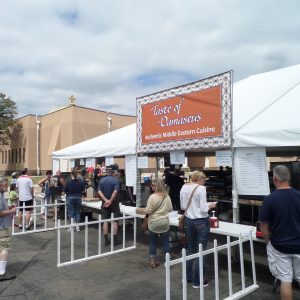 #1275 – Dick Bernard: Upcoming “An Inconvenient Sequel: Truth to... Donald Trump at Six Months: “An Eye for an Eye”
Scroll to top