We went to see Al Gore’s film, An Inconvenient Sequel: Truth to Power on Wednesday afternoon. Climate change is a topic that has long been of concern to me, and I have written about it before, here, and followed it quite actively since we saw Al Gore in person in St. Paul in 2005, and then saw the original An Inconvenient Truth: A Global Warning in 2006.

First, the bad news: Out of the gate, the film as measured by box office, as Fox News proclaimed, “bombs at the box office”.

But there are other opinions “headlined” on the internet search I did on Thursday: here, and here. And if you take the time to view the Fox News piece above, it is a ten minute segment featuring Al Gore on Fox News just days ago.

What difference does ten years make? While acknowledging his own dark times, Mr. Gore points out the huge successes, not the least of which is the COP21 in Paris, where 193 nations signed on.

“Don’t judge the book by its cover”.

Wednesday, there was only a single theater in the Twin Cities showing the film – the Uptown at 28th and Hennepin. It is an “inconvenient” place to see a movie. We were going to see the film Sunday, but streets were blocked by the annual Uptown Art Fair which basically surrounds the theater. Even in the middle of a rainy day, parking was an issue. I was actually surprised that there were perhaps 50 of us in the Theater for the 2 p.m. show.

On the other hand…Inconvenient Sequel is a film of substance. If you care at all about the future in environmental terms, the film is much more than worth the time. See it in person if you can. My high spots: the story of Discovr (not misspelled); and crucial parts of the ‘back story’ about the Climate triumph at COP21 in Paris in 2015. Mr. Trump may feel he’s dissing President Obama when he refused to sign for the U.S. as the pact continues. Rather, I think, he is dissing us all, including American business.

While there is a long, long, long ways to go, the movement to build awareness of the climate change issue is very much alive and well, and change is possible.

Inconvenient Sequel, more than anything, gives a sense of empowerment to “we, the people”, going forward. The future rests with us.

Take the time to see the film, and spread the word.

In 2006, I purchased ten copies of the DVD, An Inconvenient Truth. I still retain one. As I have related before, we saw Mr. Gore in person in St. Paul a year before the film came out, and we were in the front row of a packed Woodbury theatre a year later to see the first run, and my wife almost yelled, “that’s me!” when she saw herself on the big screen, going up to shake Al Gore’s hand. It’s still there, less than five minutes into the film. 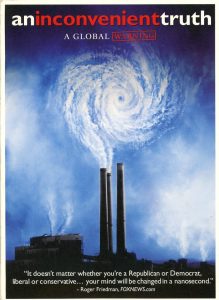 As I was scanning the cover jacket above, I noticed for the first time the quote at the bottom of the illustration, by Roger Friedman, FOXNEWS.com. In the above segment with Chris Wallace on Fox News a few days ago, Wallace says that it is the first time in 17 years that he’s interviewed Gore. He says in the recent interview, let’s not wait 17 years for the next visit….

There is possibility out there. Go for it!