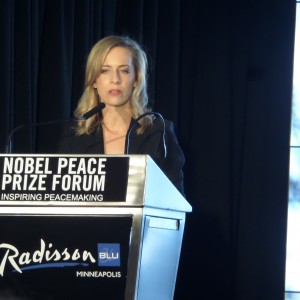 Sunday morning was the first day of Daylight Savings Time, so when we convened at 9 a.m. the crowd in the meeting room was somewhat thinner than expected for the usual reasons, including forgetting to “spring ahead”.
Forum Executive Director Gina Torry began promptly, with a story about a visit she’d had with a large group of women in a strife torn village in the Central African Republic some time back.
She asked them some questions, but no one answered. The interpreter said that they were shy, and the interview style was replaced by their singing a song in which they articulated some of their wishes.
She played a short video of the women singing to her. It was inspirational.
It caused me to think of a visit nine years ago to Haiti, with a delegation from the micro-finance group Fonkoze. At least twice, in the interior of Haiti in or near Hinche, we met with groups of women who greeted us with group singing.
As it was with our group, Gina’s time together with the CAR women was good. Then she left.
But within a week she heard that some of the women had been killed, others disappeared.
It was a sad story about a sad reality.
As I often do in such settings, myself part of the audience listening to someone else who’s the expert, I notice how I feel: what would I do? What can I do? I notice my colleagues around me. Those older than I; women; students…. What are they thinking and feeling?
Chances are, for most of us, there are variations on the same theme: We convince ourselves, or others help us to be defeated before we even start: “I couldn’t do that”; or, “I don’t have the time”, or, or, or.
It likely took great courage for those women to come to that meeting, to sing their song for the visitor. Some of them, apparently, paid with their lives soon thereafter.
I thought of some years earlier, in that same country of Haiti, where illiterate peasants – most of the population – finally, for the first time, actually had an opportunity to vote for their President, but had all manner of roadblocks thrown up to make voting all but impossible. They showed up and voted, regardless of the hardships.
They put many of us to shame.
At the end of her short presentation, Gina noted to us that she was wearing only one earring.
The other, she said, had been left on a table outside the room, along with other single earrings, a silent witness of native American women to those of their sisters who had disappeared into the abyss of things like sex trafficking.
It was a powerful witness, and I hadn’t noticed the table before.
But I stopped by the table several times later.
Our time on the planet is short, and it is up to us what we do with it.
Are we on the court, or in the stands, or do we even bother to show up for the game?
It is up to us.
That is my takeaway from the Nobel Peace Prize Forum 2015. 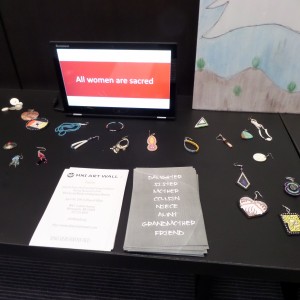 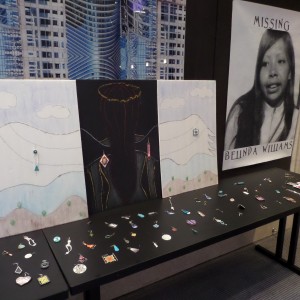