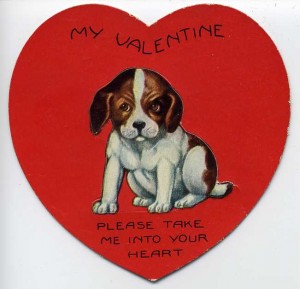 Thursday our 15-year old grandson (aka “the kid” and “hi guy” to me) was over for pizza. Grandma took him home (he lives nearby) and after returning she related a brief story.
He wanted her to go the gas station and the reason came out, after a little prying, about why: he wanted to pick up some candy for a girl for Valentine’s Day. “Don’t tell”, he instructed, specifically referring to his parents.
I haven’t heard how this all went on Friday. I think Grandma was a little jealous; some other girl had entered the kids life.
So is how it goes. We’ve all been there, done that, and there are doubtless sweet or funny stories about that first awkward move towards the first venture towards a possible relationship.
Of course, just a few days after Uncle Vincent’s funeral, I remain in a nostalgic mode, relating to the North Dakota farm, following the recent death of my uncle.
That place has been a treasure trove of artifacts from the past.
Some years ago, I borrowed the tin container chock full of old postcards, and brought them home to classify and scan them for posterity. The article I wrote about them is here*. There were Valentine’s back in the early 1900s. One of them is at the beginning of this post. Here’s another: 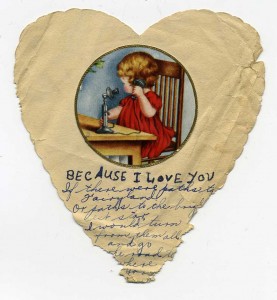 But the focus for me, this day, is another old piece of paper I found just days ago; another item lurking amongst the items in the old desk Vince and Grandpa used. You can read it here: Busch 62nd Anniv 1967002001
It is not known who wrote this draft of (perhaps) an announcement for the local paper in LaMoure, but it is most likely that it was submitted before March 17, 1967, less than two weeks after the anniversary, when Grandpa Busch died suddenly at home, the story being that he was coming up from the basement with some eggs for breakfast. Vincent at the time was 42 years old; his sister Edithe was 47; and Grandma would live five more years, dying in 1972.
I don’t know if there were “sparks” (or Valentines) in Grandma and Grandpas history, which led to their marriage, at ages 24 and 21, Feb. 28, 1905. Their families lived on adjoining farms in rural Wisconsin near Dubuque, and it was not uncommon in those days for the parents to have some say in who or when someone married someone else.
Whatever the case, as the story tells, they came to strange and uncrowded country far from their home in Wisconsin, raised 9 children, and lived a very long life together.
“The kid”, apparently, has started to notice girls, and is starting down the road that adolescence brings to us all.
I wish him well.
Happy Valentine’s Day!
https://thoughtstowardsabetterworld.org/wp-content/uploads/2022/04/thoughts-300x138-1.jpg 0 0 dickbernard https://thoughtstowardsabetterworld.org/wp-content/uploads/2022/04/thoughts-300x138-1.jpg dickbernard2015-02-14 14:38:262015-02-14 14:38:26#992 – Dick Bernard: Valentine's Day, today and yesterday.
0 replies