PRE-NOTES: 1. Auschwitz-Birkenau, air photo and description: Auschwitz-Birkenau001
2. Recollections of a GI who visits Dachau shortly after liberation in 1945 are at the end of this post.
(click on photos to enlarge them) 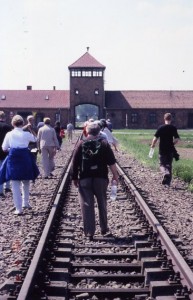 A quiet walk on a beautiful day May 4, 2000. Approaching the entrance to Birkenau death camp, Poland.

January 27, 2015, marks the 70th anniversary of the liberation of Auschwitz-Birkenau death camp near Oswiecim, Poland. This day, 70 years ago, marks the beginning of the end of WWII, the deadliest war in world history, in which near 60,000,000 people died, about 3% of the world population.
Near 6,000,000 of these deaths were Jews, over half the world Jewish population at the time. One in six of the Jews who died in WWII, died at Auschwitz-Birkenau.
May 4, 2000, my 60th birthday, was spent at Auschwitz-Birkenau with a group of about 40 Christians and Jews from Temple Israel and Basilica of St. Mary in Minneapolis MN.
It was a beautiful spring day.
I suspect there were many such beautiful (weather) days at this horrid place during its operation 1940-45, but the business of this camp, which opened the same month and year that I was born, was death, pure and simple.
At Auschwitz, the victims were largely Polish political prisoners; at Birkenau, the victims were Jews.
Our Pilgrimage was a profound one. Earlier we had visited Plaszow (suburban Krakow, subject of the movie, Schindler’s List), Terezin, Prague. And spent a day at Tabor, a Czech town whose Jewish population was obliterated in the Holocaust, but whose Torah was saved and had become part of Temple Israel in Minneapolis.
May 4, we began our visit at Auschwitz. Then we walked to Birkenau, along the very same railroad tracks which brought box cars full of victims to the rail head within the camp (photo above). Men, Women and Children whose destination was the brutally efficient ovens. 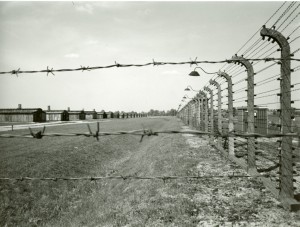 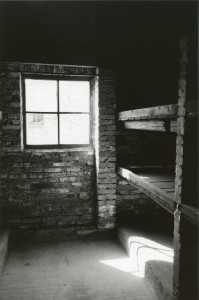 The sole function of this awful place was to kill people, mostly Jews, as efficiently as possible.
It was an experience burned into one’s very soul.
If had lunch that day, I don’t remember it.
On our day, the sun was shining, temperature about perfect, the grass green, leaves were on the trees, birds chirping….
We walked mostly in silence in this horrible place; often the sound of our feet the only human sound.
One of our fellow Pilgrims, Len Kennen of Temple Israel, later assembled a photo gallery of what we saw not only at Auschwitz and Birkenau, as well as from other sites of the Holocaust we had visited. Len’s photo galleries, added with his permission, are accessible here and here. Click on any photo to enlarge it. (Photos from the other sites are accessible here.)
As our day closed, the group gathered for a memorial service and candles were lit in memory of those whose lives ended here.
Earlier in the day, at the entrance to the first of the horrific exhibit buildings at Auschwitz, we saw, posted, with emphasis, the oft-noted quotation of George Santayana:
“Those who cannot remember the past
are condemned to repeat it”
We arrived home in Minnesota emotionally and physically exhausted a few days later, and after a period of several months of reunion and passion, building on what we had experienced, our lives cycled back to normal – a usual pattern after such high (or low) experiences.
Then, little more than a year later came 9-11-01. I suspect we reacted, individually, and continue to react, in different ways. We’ve never talked about that, as a group.
What would we say?
Today, 15 years later, the memories of the visit to Auschwitz-Birkenau remain vivid.
But on this day of remembrance, and in all days, we humans are well advised to remind ourselves of what we, ourselves, are capable of, for good, and for evil.
Auschwitz-Birkenau is a powerful reminder; 9-11 as well…. 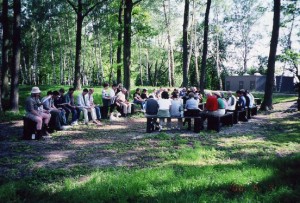 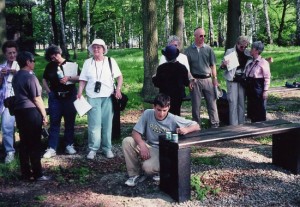 Ben and the Memorial Candles within Birkenau