Today is Martin Luther King Day in the United States. The Day was first implemented in 1986; first recognized by all States in 2000. This years MLK Day is one of the most significant in the days history, in my opinion.
Yesterday I went to the film “Selma” about the events surrounding March 25, 1965, and the ultimate passing of the Voting Rights Act later that same summer*.
The film is powerful and moving. I would urge attendance.
Today the very Right to Vote is under serious attack in many places in our country.
I’m an old geography major, so I always seek some geographic context. Here is a map of Alabama from my 1960 Life World Atlas: Alabama as of 1960001. Here’s the more specific location:
(click to enlarge) 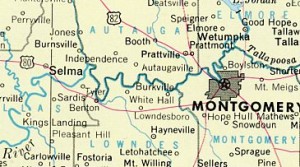 Selma Alabama is about 30 miles west of Montgomery, the capital of Alabama