This summer my friend, Kathy Garvey, gave me a photo and fascinating accompanying story, both of which speak for themselves and follow, below. I have purposely not edited Wayne’s words, as they are written spontaneously, and more interesting. “Dad” is Kathy’s Grandpa, and the other players are his wife and kids. Wayne writes extemporaneously the recollections about the family in the early 1940s. Shakopee is a southwest suburb of Minneapolis MN, on the Minnesota River. The other places mentioned are south suburban Minneapolis and St. Paul.
(click to enlarge) 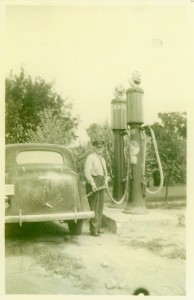 “Thank you for the picture of Dad at our filling station at 139 Dakota Street in Shakopee in 1942 at the age of 68. I had never seen this picture. The pumps were not electrified. The customer stated how many gallons wanted and you used the hand pump to reach that level in the glass bowl, then gravity hosed it to the car. Plastic had not been invented and no metal quart cans of oil as aluminum was needed for building planes and tanks. You filled quart bottles from a drum as needed. At age 11 I waited on customers as well. Station was closed about a year later as it was a poor location and gas being rationed the average the average person only had stamps for three gallons per week. Margaret was at the Cargill shipyard and received extra stamps due to her vital work [nursing]. Cars of the day were difficult to start in cold weather so she had an extra battery installed under the hood of her 1939 Pontiac coupe.
In 1939 Dad’s legs were bothering after years of following a team of horses and a plow thru the fields so it was decided that Elmer and Irene would take over the farm at the time of their marriage and we would move to Shakopee to a house acquired thru a tax sale. Rita and I thought we were in heaven being only two blocks from St. Mary’s school, one block from the bakery and two blocks from downtown. There was no central plumbing or heat so Dad partitioned off part of the very large kitchen for a bathroom including a tub. After years of an outdoor toilet and Saturday night baths in a washtub behind the kitchen stove this was a real luxury. A furnace was ordered from Montgomery Ward in St. Paul and an installer came by train to put in and stayed with us for two days as he did not have a car. I should add that we were only two blocks from the first indoor movie that we had ever seen.
Farmers could not join the social security program in those days so we had no real source of income. We fixed up and painted a house acquired thru tax sale and rent from this helped. A few summers Dad worked for the State of Minnesota planting trees but he could not stand the hot weather. During the winter he liked to attend court trials and was always hopeful they would need a juror for the five dollars per day pay which could probably equate to eighty dollars today.
In 1941 he acquired a large stucco home in rundown condition which needed to be razed thru tax sale for twenty-five dollars. Rita and I spent many hours there stripping plaster and nails from the wall laths so they could be used in the new house on 139 Dakota Street. With the help of a retired carpenter for framing Dad did most of the building by himself. On the afternoon of December 7, 1941, he and I were working there when Rita hurried to tell us of the attack on Pearl Harbor. We moved to that house in 1942. Later he would build two other houses on speculation, one on East first street and another near the women’s reformatory.
During the war mother and other ladies would gather at the reformatory to cut sterile bed sheet into thin strips and roll them to be used treating the wounded soldiers in Europe. Also since we lived near the railroad tracks hoboes riding the trains would often come to the door asking to work for food. She gave them sandwiches and sent them on their way.
In the early days the Milwaukee railroad had a daily freight train with a passenger car on the end between Farmington, Lakeview, Prior Lake, Shakopee and Chaska, returning that afternoon. There was a siding in Credit River about one mile from our church. This would not happen today but at the time trucks to carry goods to the Twin Cities were not very reliable so farmers could use this siding to ship crops to market. Every fall Dad would contract to sell a load of grain, and each winter a load of cordwood. On the appointed day Mary, Margaret and Helen would go to the siding and flag the train down and instruct the trainmen as to placing an empty boxcar. Elmer would stand on the hill behind our house and listen for the whistle of the steam engine approaching the grade crossing. Then if he heard the engine starting up several minutes later he and Dad would hitch teams of horses to the already loaded wagons. The girls would wait at the siding and help load the boxcars which are huge in size and required many wagon loads to fill. Two days later they would again flag down the train to transport the car. Dad, Elmer and at times a hired hand would spend much of the winter cutting wood as there was no fieldwork at that time of the year.
Helen related that every second day mother would bake 13 loaves of bread and two tins of muffins. When a hog was butchered she would cook and can the meat in mason jars. The pork was put in huge crocks with a layer of salt between each.
I once asked Margaret to write some family history. She replied in part “we were so lucky to have such good, hardworking parents who did not smoke, drink, curse or gamble”. How true.”
Wayne, July 9, 2014
https://thoughtstowardsabetterworld.org/wp-content/uploads/2022/04/thoughts-300x138-1.jpg 0 0 dickbernard https://thoughtstowardsabetterworld.org/wp-content/uploads/2022/04/thoughts-300x138-1.jpg dickbernard2014-11-10 21:11:082014-11-10 21:11:08#953 – Wayne: A bit of nostalgia remembering the early 1940s.
0 replies