This is the third post of three on this topic.  The previous posts are Sep 26 and 28.
Sometimes there are valuable lessons to be learned from unexpected persons or from groups that have,deservedly or not, been labelled in a negative manner.  I thought of such a possibility on Saturday.
The first thing I noticed, walking up to the meeting on Saturday, September 26, was a series of posters, Burma Shave style, beside the walkway.  Coming closer, I noted that they were posters of all of Minnesota’s past Governors, from the first through the current.  They were especially pertinent for this event, which featured all known Democratic candidates for Governor of Minnesota.
One of them I noticed especially was that of my friend, Elmer L. Andersen, Minnesota Governor, 1961-63, who lost a second term to Democrat Karl Rolvaag in, until the 2008-09 Franken-Coleman election contest, the most protracted electoral recount in Minnesota history. 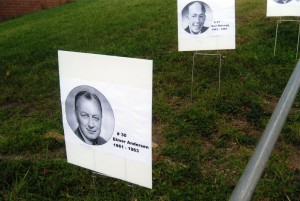 I believe Elmer L. could teach something to today’s Progressives and others wishing to learn the practice of constructive politics.  But first, a little about the man.
Elmer L. Andersen was an old-school progressive Republican.  From the first time he voted, in the early 1930s, he voted Republican.  Beginning in the late 1930s he became active in the Republican party, getting to know people like Harold Stassen, and in 1949 be began a number of terms in the state Senate and then the Governors office.  He recounts his political adventures in his autobiography, A Man’s Reach (published in 2000).  His philosophy is laid out in two excellent books: Views from the Publisher’s Desk (1997), columns he wrote as a newspaperman; and I Trust to be Believed,  a collection of his speeches published the year of his death in 2004, at age 94.  All are worth reading.
He and many of his Republican cronies were moderate, progressive, even liberal.  In fact, he called himself a liberal Republican.  He was a trailblazer for many ideas today’s Progressives might claim as their own.
There was plenty of political jousting and partisanship in his good old days.  But there seems a qualitative difference between then and now.  Then, warriors fought – and worked out deals; today, all efforts are made to polarize and divide.  The difference was dramatized for me in April, 1999 when old-time Democrat warrior Willard Munger gave an award to his friend Republican Elmer Andersen.   They had common cause on the environment, and other things, and it was obvious that they deeply respected each other. 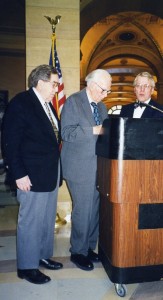 Along with other moderate and progressive Republicans Elmer Andersen was effectively purged from the party he helped build during the radical right wing takeover which began in the 1980s.  While he never said so, directly, it is likely that he voted Democrat in his last elections.  He didn’t desert his party, his party deserted he and his many moderate Republican colleagues.  Quiet efforts are being made to reclaim the Republican Party, but it is a difficult struggle.  The right-wing radicals remain in charge.
I’ve never been Republican, and Elmer L. never declared as a Democrat.  In his last years he probably worked quietly to help bring moderation back to his party.  But it was and is a daunting task.  Polarity is still the name of the game.
Today’s Progressives probably have good reason to study how Elmer L. Andersen did politics back in the days before high technology, rank partisanship and purchased elections.  He was, it is clear, a savvy political organizer, and a master of Tip O’Neill’s mantra “all politics is local”.  Politics, then, was “boots on the ground”, as it will have to be for people who don’t have loads of money to buy today’s elections.*
Elmer loved knowledge, and his profession was selling, and he knew how to work with people of all sorts. That he served only a single term as Governor does not detract from his reputation, at least from my perspective.  He was a class act.  If nothing else, consider reading the middle third of his book, A Man’s Reach.  There he talks about the practice of politics.  One could do worse than practice what he taught through his actions.
Since Progressives often seem to characterize Democrats as little more than luke-warm Republicans, perhaps a companion event to September 26, inviting all possible Republican and other candidates to answer the same question in public, might be worthy of consideration.  Just a thought…. 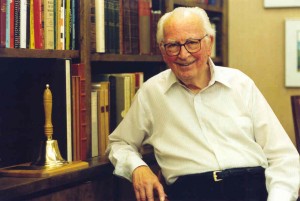