This past week was a phenomenal early fall day in our area, easily matching the postcard vistas featured for Maine on the evening news. A couple of days ago, I took this snapshot along my walking route: just some brush along the shore of a storm drainage pond. Whatever the source, it’s a nice pic, and I invite you to click on it to enlarge.
(click to enlarge all photos) 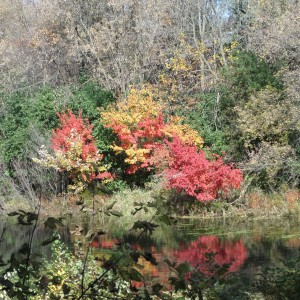 The photo doesn’t match at all the title of this post, nor the content to follow, except that this kind of scene would have been seen by my parents and grandparents and all generations before in their times in this part of the world. The only difference is that we can now take photographs of them, and even amateurs like myself can do an okay job with our equipment (mine a Samsung).
This post was, rather, spurred on by a headline I saw in the Business section of the Wednesday Minneapolis Star Tribune: “Earlier Black Friday spreading” (Oct 15, 2014). Shortly, the “Christmas” music will become a constant at my coffee shop, and the “shop till you drop” drumbeat will begin, to buy more than you need, with money you may not have, to give to someone who may not want the gift given. I suspect there are plenty who will be just as happy when this “joyous” season passes, as will be the merchants…and churches…for whom this two months or so is a major generator of money in the till.
There is no “Christ in Christmas” here in our country, at least not publicly, or it has to wrestle in to get any genuine attention.
This summer I’ve had much more than a normal opportunity to reflect on how material goods diminish in value (and interest) as the twilight of life comes.
We’ve spent the summer dealing with the treasures of a 109 year old farm in North Dakota, where everything had a use, or future use. My Uncle and Aunt kept everything.
Leaving aside assorted large goods, like an old farmers dining room table, the first cut of the treasures in the house and farmyard occupies a small portion of storage. There are really valuable things to me, an historian, like photos and books, but the essence of the residue shows in this picture from inside my garage, taken this week. 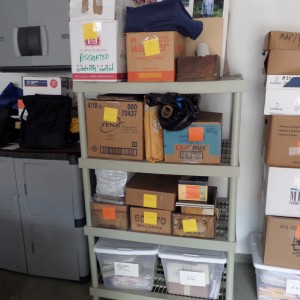 I do not worry about these boxes being stolen. A self-respecting thief might ask “why did they keep THAT?” But I certainly won’t fault my Aunt and Uncle. They were being prudent stewards of what they were given, even if most of it had no earthly use for them, or anyone who follows.
I retired fourteen years ago, and in the same year moved from one suburb to another.
When I left my last work career of 27 years, I took home two boxes. The one I use quite often is pictured below. The second I’ve never opened and thus should be sent for recycling.
The ten years of living in a condo yields this box of “knick knacks” (also pictured). It hasn’t been opened since I moved, and likely won’t be until someone goes through my stuff and asks “why in the world did he keep THAT?
I could show my Dad’s two boxes, same story.
You get the point, I think.
Why not give more attention to downsizing, than getting more and more? Profits are okay, but there can be other priorities as well. 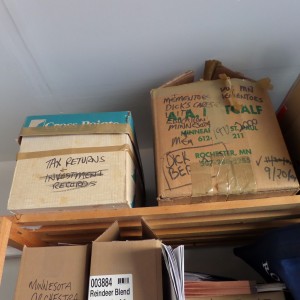 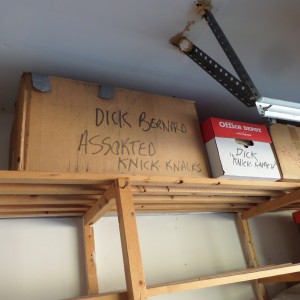 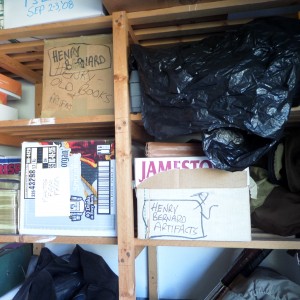