The two ladies saw me coming, and knew what to expect. I had come armed, with my camera.
My target;
(click to enlarge) 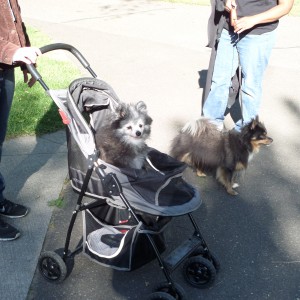 Several successive Saturday mornings I’d seen this pooch in a stroller. Fourteen years of walking in this park, and I hadn’t seen a pooch so royally treated. This was a dog who had it made. Why walk when you can ride? Legitimate question. The lady said her husband was initially embarrassed to explain to others why the dog got a free ride, but he got over it!
So it goes on my near daily walks in our community park.
I’ve done near 10,000 miles of walking over those fourteen years. My knees are beginning to suggest that maybe I should think of cutting back, but it will be a hard sell: the walk is my addiction.
In a sense, this park is its own community.
I’ve written of it a couple of times in this space: The Can Lady remains a good friend; the guy who taught me by his crisis to bring along my cell phone on every walk survived.
Just this morning I came across a lady walking her dog (or is it the dog walking her? The four-legged one is usually the boss.) The sprinklers were on in the park, and it was irritating her. She’d lived in this area since 1956, and she felt it was a waste of resources and money to water the grass in a park.
I agreed.
We went our separate ways, but then I decided to give her a little advice: how about writing the mayor and council of Woodbury to express your complaint, I said. Maybe she will. Maybe I should, myself. The watering system is really unnecessary.
It reminded me of another political moment in this park, some years ago. Another lady on the trail asked me to join in petitioning the city to not allow a mountain biking trail that was proposed for the woods abutting the walk way.
It didn’t seem to be a problem, so I declined. But I admired her for coming forward with the suggestion.
The bike trail was built, and during nice weather it is well used, and the mountain bikes don’t interfere with we pedestrians.
It is a cooperative venture – those who use the bikeway help maintain it. An organization called MORC was apparently instrumental in its coming into existence. 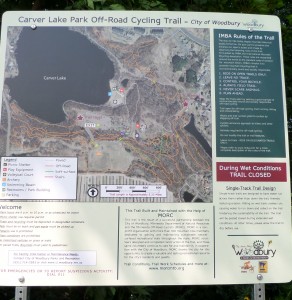 Of course, all is never quite so simple.
About a year after the lady had invited me to petition the city about the bike path, I was at a community conversation on taxes. We were divided into table groups, and a bunch of anti-tax guys were at the same table as I was.
A couple of them were lambasting the city for spending money on a new Sports Center, and I had defended the project by saying some of my grand kids played baseball there. I didn’t benefit directly, but the park was a benefit to the greater community.
One of the young guys at the table, of the anti-tax group, started to think a bit, mentioning that he was part of the group that had lobbied the city to allow and participate in the building of the bike trail in the park.
It seemed, at that moment, that he had a new insight: that there are ways in which communities cooperate with each other, even when individuals have no direct interest in a particular venture or activity.
Of course, other activities go on in the park and along the trail. This summer for some days a crew of young people were building some fencing along part of the walking route. I inquired about them and they were part of a crew for something called the Tree Trust. Checking out the website, it’s a most impressive bunch. Unless I walked the route, and had asked the question, I wouldn’t have known they existed. 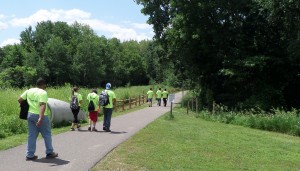 Our communities are diverse, of many parts. We’re not walking the route alone.