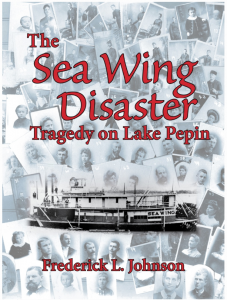 For a number of months, occasional coffee-time conversation with friends David Thofern and Frederick Johnson usually got around to talk about progress on Mr. Johnson’s latest book, “The Sea Wing Disaster. Tragedy on Lake Pepin” (available through Goodhue County Historical Society here with event schedule about the book here). When the book came out, I bought a couple of copies (well worth the cost), and when I learned that the author would be talking about the volume at the Le Duc House in Hastings MN, I put it on the calendar, and last night my spouse and I went for a most fascinating hour presentation.
(click on photos to enlarge; to further enlarge poster beside Johnson, put cursor over the poster and click again.) 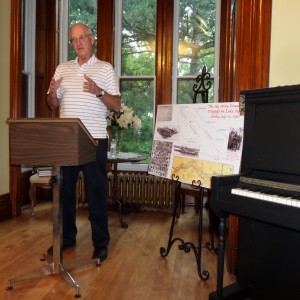 Frederick, David, myself, and others of we “regulars” are into bantering, about this and that, and this project was no different.
But the Sea Wing Disaster was no laughing matter. It happened July 13, 1890, in Lake Pepin, the shallow and large wide spot in the Mississippi River below Red Wing MN.
In the early evening of that day, the overloaded small steamer capsized in very strong winds, and 98 of the 215 passengers died. Most were from Red Wing.
It was and remains one of the largest domestic maritime disasters in U.S. History, and one of the very few in which weather was the major causative factor. (Many of the Sea Wing passengers were aboard a barge, lashed to the Sea Wing. All but one of the passengers on the barge survived. The Sea Wing, only 14′ wide and about 100 feet long, was overloaded and no match for the wind induced massive waves. The passengers had hardly a chance.) 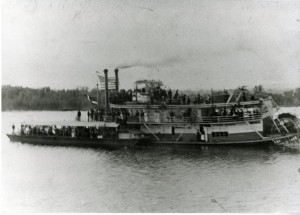 The Sea Wing and Barge in tow before the catastrophe… 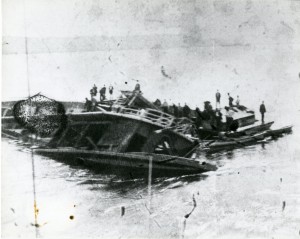 …and after. Photos courtesy of Goodhue Co. Hist. Soc.

In these days of AccuWeather and instantaneous forecasting it is perhaps hard to imagine being surprised by bad weather. People back then, and until very recently, relied on the usual visual signs of bad weather, and they knew what bad weather meant, in general. But this storm was different. Not long before the Sea Wing was struck down, a huge tornado from the same system had hit the Lake Gervais area just north of St. Paul. But this was 1890, and there was no easy way to spread the word about what was lurking not far away. The boat, the captain (who survived) and the passengers had hardly a chance.
Johnson first wrote about the Sea Wing in 1986. At the time he started planning to do an article, but there was so much material that he expanded his work into a book. Fast forward to 2014, and major additions provided by newly discovered material, including from the descendants of the casualties and survivors, gave rise to a much expanded new work. Indeed, even at the August 17 program, members of the audience showed photos of their ancestors who were with that boat the ill-fated day.
In this new edition, Mr. Johnson painstakingly researched both those who died and who survived. Judging from the audience on Sunday night, the new volume will bring forward still more new information retained in family collections for near 125 years.
Take in the presentation if you can (schedule above), and/or buy the book. It is a very interesting look at history. 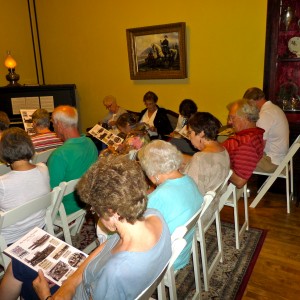