Since 1980 I’ve become the family historian of both my mother’s and dad’s families. Once hooked, mysteries and secrets are much more interesting than the simple obvious facts.
So, in the history of Mom’s family, her older sister Lucina’s marriage is recorded, but no date. Lucina, always an elegant woman in my memory, never did get around to writing down what must have been abundant memories so, for instance, no wedding date is listed, though I always had heard it was 1939. She would have been 32 then. Their first child was born in 1941.
Lately I’ve been working with musty and dusty materials from the ancestral farm in North Dakota, and today I happened to look at an envelope of photo proofs sent Lucina’s husband Duane on August 11, 1939. Being proofs, the images are near invisible, but oh, what the story.
Here are three photos: one of the envelope and two of its six contents. Click to enlarge. 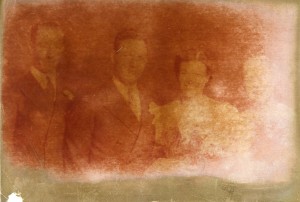 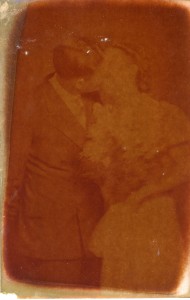 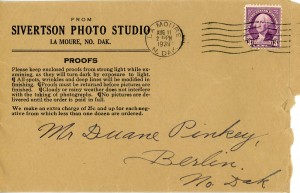 The envelope which held the photo proofs.

The proofs, imperfect as they are, since they weren’t intended to last for 75 years, tell their own stories. The best man and maid of honor are faces unknown to me. The bride and groom were, to my knowledge, both teachers in the tiny school in Berlin ND. They likely married in the church almost adjacent to the school, St. John’s of Berlin, and doings afterwards were probably at the Busch farm home less than five miles away.
Pretty obviously, from the envelope, they were married in early August, 1939.
Weddings in those days were generally not high-priced doings. This wedding was during the Great Depression after all.
A few photos likely was about all the couple could afford.
My Mom and Dad – Mom was two years younger than her older sister Lucina – married in the same church two Augusts before Lucina and Duane. Theirs was the first wedding in Ferd and Rosa Busch’s constellation.
Very few photos exist to document their wedding. They were “poor as church mice” then. It was hard times on the prairie.
Till he died, Dad always wondered what happened to the “ricing” photo someone took after the ceremony. I’ve now gone through hundreds of photos from the farm, many from those days, and haven’t found such a picture. Maybe some day….
Lucina and Duane’s marriage lasted over 52 years. They had two children. Duane died first, in 1992, and Lucina lived four years beyond.
Mom and Dad’s marriage lasted 44 years, ended by Mom’s death in 1981. Dad lived to 1997. They had five children.
Time passes on, and what is left is memories, and if we’re lucky some visual representations of happy times past.
https://thoughtstowardsabetterworld.org/wp-content/uploads/2022/04/thoughts-300x138-1.jpg 0 0 dickbernard https://thoughtstowardsabetterworld.org/wp-content/uploads/2022/04/thoughts-300x138-1.jpg dickbernard2014-08-16 20:29:532014-08-16 20:29:53#924 – Dick Bernard: A wedding: possibly catching a missing piece of history.
0 replies