I wrote yesterday about my personal “history” with Prairie Home Companion; then I spent four hours at Macalester, and added a few photos of the event to the post. You can see it all here.
There is a temptation to go back today…and tomorrow as well. But there’ll be plenty of other folks there, and I’ve spread the word about the richness of the day to my small circle, and hopefully there’ll be throngs this afternoon and tomorrow at the event.
The relevant photos from yesterday are in yesterdays post. I did note Garrison’s long-time “trademark” (a little worn, a lady next to me said), and an older couple, obviously fans, who are “copy cats”. The two photos are below, and need no further explanation for those who are fans. (Hats off to Garrison on his shoes, from one who believes “old” and “comfortable” are synonyms.)
(click to enlarge) 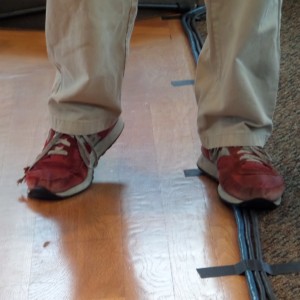 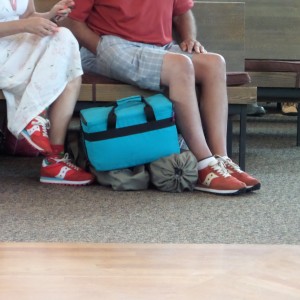 I’ll listen to PHC on the radio tonight – first time I’ve done that in a long time.
But I lived the show at Macalester, yesterday. It is odd how things come together: seeing assorted folks I didn’t even know were Keillor fans; seeing others who knew people I did. A little chatting goes a long way, some time.
One lady and I got to the Chapel 45 minutes before Keillor and Company were to perform, both of us intent on front row seats (which we secured). She said they had gone to see PHC at some town along I-94, but she didn’t remember the town. Some hours later I ran into long-time friends from Anoka who’d been at the same place as I, and they said they’d gone out to see Garrison perform at Avon MN (on I-94). Aha, Brenda, if you’re reading. That is the place!
Some guy from Lanesboro asked a question about an almost cancelled outdoor performance there, and Garrison answered immediately. Later, buying the commemorative t-shirt and cap, the guy in the booth said they very nearly had to cancel a recent outdoor event at Ravinia OH for the same reason: threatening weather.
I’ve come to be around Garrison a number of times over the years. He is a contradiction: he is remote, but get him started on a story, and off he goes. They don’t invest a lot of time in formal rehearsals, I gathered. He observed that many of his musicians were really good actors as well, until they had to rehearse their lines, and the spontaneity went down the tube.
Yesterday, I dug out my modest Garrison Keillor file, and today I looked through it. It yielded some interesting morsels, most significant of which is a publication few but Garrison Keillor himself know exist.
Back in the late 1980s I had reason to spend some time in the musty “tombs” of the Walter Library on the main campus of the UofMinnesota. I was researching something very specific that required me to go into old archival boxes in the bowels of that historical library.
By then I was a real fan of Keillor, and I had read that he was, about 1965, the editor of the campus literary magazine, the Ivory Tower.
So, on a side trip, I discovered down there, in another place, two articles, both about Hockey at the UofM, from February 1 and April 5, 1965, issues of Ivory Tower. I photocopied them, and here they are, with acknowledgement: Keillor Ivory Tower 1965001 WARNING: If the words “Hockey”, “Doug Woog”, “John Mariucci”, and “UofM versus University of North Dakota at Grand Forks” ring your chimes, be prepared to read the 14 pages behind the link….
The little file was a brief story of the life of a relationship – Keillor with his show and his town, St. Paul. The June 1987 Minnesota Monthly devoted 124 pages as a Collectors Edition “Farewell to A Prairie Home Companion”. This was only 13 years into the run, but that was Garrison’s mid-life crisis.
The January 2000 Northwest Airlines World Traveler cover story on some air trip I took was “Garrison Keillor, America’s Storyteller”.
In February, 2001, our friend in London sent a long Review, “In search of Wobegon”, in The Sunday Telegraph. The June 28 and August 7, 2005, Minneapolis Star Tribunes had long articles about the upcoming Prairie Home movie directed by Robert Altman.
June 27 and July 4, 1999, the St. Paul Pioneer Press and Minneapolis Star Tribune had long articles on the 25th anniversaries of Prairie Home Companion.
I just re-looked at the articles, and the thought came to mind that I had in that old file folder was something of a history of a relationship that could fit most anyone, not just Garrison Keillor.
Spats, separations, celebrations, misinterpretations, and everything that goes along with couples everywhere.
Even the 40th anniversary is significant. By 40 years, there is some quiet acknowledgement that 50 years is quite a long ways off, and things have a way of happening, so why not find an excuse for a party!?
Garrison acknowledged as much in that rich hour we spent with him yesterday. I can only paraphrase, but in talking about the future he said he wasn’t much looking at ten years ahead. He’d seen politicians who stayed in office long past their time, and it wasn’t pretty….
Garrison, I’m glad to be in your neighborhood.
And Monday, when once again we drive west on I-94, and pass St. Cloud, St. Johns, Freeport, and Avon and all the rest of the places that helped give birth to Lake Wobegon (not to mention Anoka!), I’ll have occasion to smile.
Thanks for the memories.
https://thoughtstowardsabetterworld.org/wp-content/uploads/2022/04/thoughts-300x138-1.jpg 0 0 dickbernard https://thoughtstowardsabetterworld.org/wp-content/uploads/2022/04/thoughts-300x138-1.jpg dickbernard2014-07-05 11:58:392014-07-05 11:58:39#910 – Dick Bernard: Prairie Home Companion at 40 – Chapter 2
0 replies