COMMENTS INVITED, both on-line and in e-mail form. Will be added at the end of the post.
Sometimes life brings fascinating surprises. Some weeks ago a lady was photocopying something next to me at FedEx, it looked interesting, and I took the bait.
It was a tour of the life and times of General William Gates LeDuc and his wife Mary at the archives of the Minnesota Historical Society, and the Upper and Lower Landing areas of riverfront St. Paul.
Many thanks to Joan, Heidi and Linda for a great day today.
(click on any photo to enlarge it) 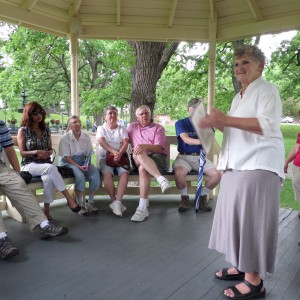 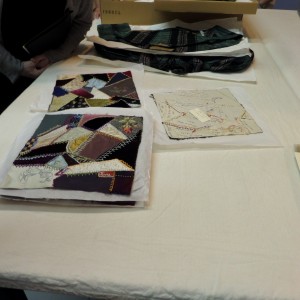 Sample of one of the LeDuc “crazy quilts” in the archives of the Minnesota Historical Society. 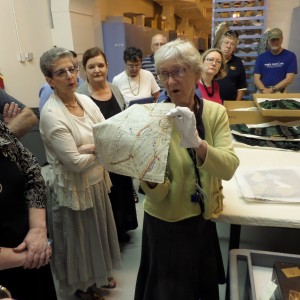 Linda McShannock of Mn Historical Society showed the back of a Crazy Quilt square, which was labeled by the maker of the quilt with the source of the pieces used.

Several additional photos are at the end of this post.
The LeDuc’s were a very interesting couple. William was grandson of a French Navy Officer who served in the American Revolution leading to the creation of the United States. The article at this link is an interesting read about the man, William Gates LeDuc.
He came to St. Paul in 1850, when the present day city was just a tiny town; became a General in the Civil War, and moved with the movers and shakers, though great wealth eluded him. He and his wife married built their mansion at Hastings just southeast of St. Paul (more here), and it was a group of friends of this house that I joined for today’s tour.
What attracted my attention initially was the obvious French name, LeDuc. I’m French-Canadian. It took little time to ascertain that LeDuc was American, descended from (grandson of) a French Naval officer in America’s Revolutionary War. French, not French-Canadian: to some, an important distinction.
Beginning about 1760, before there was a United States of America, there was a rather unusual relationship between the French, the English, the French Canadians and the United States.
In a very few words:
The British defeated the French at Quebec in 1759; Quebec had already been French since the early 1600s, and had built a vibrant French-Canadian society.
In the American revolution beginning 1776, the French-Canadians became de facto allies of England, saving Canada for the English.
At the same time, the French allied with the Americans to defeat the English, resulting in the United States of America.
Of course, in 1803, the United States doubled its size through the purchase, from France, of the immense territory called “Louisiana”.
This very odd coupling led to very complex relationships, including some perceptions of French-Canada towards France, which exist to this day.
In the days of immigration to the United States, French-speaking Canadians were distinguished from Canadians. “Canada” meant Canadians who spoke English. French speakers were another category.
Suffice, there have been books written, and endless arguments….
LeDuc was American, of French descent, and an important character who came to St. Paul at the very beginning of its development, and he was an important man. But he was American, through and through.
In all, we spent nearly five hours on the tour, learning a great deal from the artifacts, and visiting the places and hearing about the people known to the LeDucs in early St. Paul. The characters came to life.
When I left the Historical Society, I began to think of “footprints” left by these early settlers to our area: tangible items, like furniture, a sword, a dress worn to a White House formal gathering, some letters – the kinds of things you see in museum.
What would be our footprint on history, I wondered?
In a way the answer came in the gazebo at Irvine Park pictured above. It was threatening rain, and the three persons in the Gazebo invited us in. They were two adults, white, and a young girl, very dark skinned African-American, who seemed to be their daughter. They were sitting behind Heidi, who was reading from an actual letter written long ago about a young man with a hatchet in St. Paul who lied about his misdeed, and blamed a “nigger boy”, but was caught in his lie and appropriately punished. [Note Fred J comment at end of post.]
The paragraphs she read were directly from the long ago book.
The use of the word, with the young girl sitting directly behind Heidi had shock value to all of us, and Heidi acknowledged that, including to the family behind her.
It occurred to me that we are leaving footprints, and many are positive ones: a descriptor routinely and derogatorily used 150 years ago was no longer acceptable language in our society.
It was an uncomfortable and awkward moment in that gazebo, but a powerful one, with lots of room for thought. Sure, Heidi could have left out the sentence, but I’m glad she didn’t. It was another learning opportunity for us.
Thanks, Heidi, and everyone, for a wonderful afternoon. 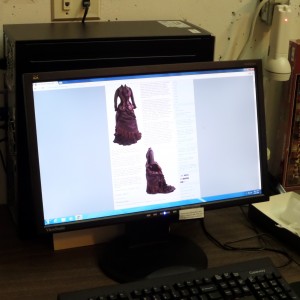 A Mary LeDuc formal gown worn to a White House function, as shown online at the MHS 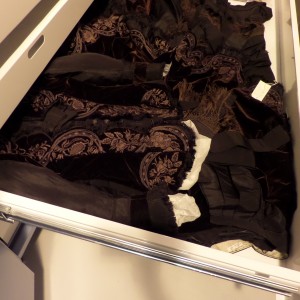 The same gown in storage in the archives of the Historical Society.

Re Mary LeDuc’s dress (two photos above) more information here. Note Facebook, etc., at the end. You are encouraged to “like” this link, and share it! 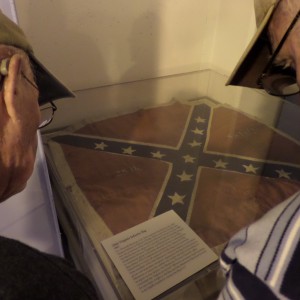 A Civil War battle flag captured by a Minnesota soldier during the Civil War, held in the museum archives. 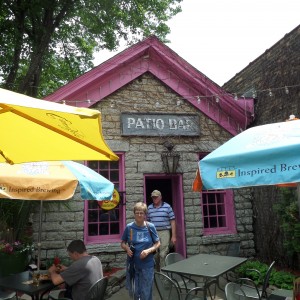 COMMENTS
from Fred J, June 1, 2014: I would make an addition to your blog commentary regarding the very interesting story you note. The tendency of those accused of crimes to blame an anonymous “black person” [the ‘N” word is no longer used] as the scapegoat culprit persists in present-day culture. It is modern racism on two fronts: 1) the accused assumes his accusers are more likely to believe him/her because of the racist belief that black people are more likely to be criminals and 2) what does it matter if an innocent black person goes to jail for the crime—they’re black after all.
Response from Dick: I appreciate Fred’s response. I recall so well the famous quote of George Santayana, given most prominent status at the entrance to the hideous Auschwitz which I visited in May 2000. “Those who cannot remember the past are condemned to repeat it”. Denying the past is as dangerous as remembering it, sometimes.
from Heidi Langenfeld, tour leader, June 1: Your blog is very thoughtful and I am okay with the reference you chose. Race and our attitudes toward how we speak about “others” is something we continue to modify as we learn. I believe it is important not to white wash history (pun not intended). But, as one of your stories in the newsletters you sent said, “victors write the history”. Doesn’t that put even more responsibility on researchers to include examples of attitudes, customs and values when we report the past?
From Jerry F. June 1: Thanks, Dick. Nice blog about General LeDuc. I’ve seen the house many times from the road but have never visited it.
From Jane P. June 1: Very interesting, Dick!
https://thoughtstowardsabetterworld.org/wp-content/uploads/2022/04/thoughts-300x138-1.jpg 0 0 dickbernard https://thoughtstowardsabetterworld.org/wp-content/uploads/2022/04/thoughts-300x138-1.jpg dickbernard2014-05-31 19:28:282014-05-31 19:28:28#892 – Dick Bernard: Meeting General William and Mary LeDuc
0 replies