Originally published as #889 on May 28.
A couple of days ago, daughter Lauri stopped by and noticed:
(click to enlarge) 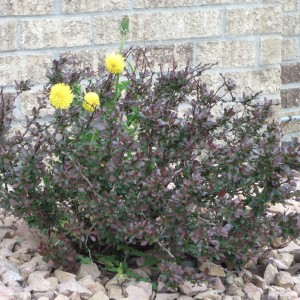 Of course, it’s spring in Minnesota, and the State Flower this time of year is the Dandelion, and the Barbary Bush that is aggressively protecting it is very prickly. So, what to do?
Besides, as she pointed out, and we both know, the Dandelion was my Dad, and her Grandpas, flower of choice for special occasions.
When he was out and about in the spring, and dropped in on the Brashers, or somebody he knew at Our Lady of the Snows or elsewhere in Belleville IL, and Dandelions were in season, Dad’s “calling card” was not infrequently a bouquet of Dandelions, with a certain amount of je ne sais quoi (a pleasant quality that is hard to describe).
He was that kind of guy, Dad was.
I’ve done home-made holiday greetings since 1977, and each year something “speaks” to me and becomes the topic of the annual greeting.
In 1996, the year before Dad died, it was the Dandelions turn, and the resulting simple card is here: Bernard H Dandelion 96001
There’s an old saying that goes something like this: “a weed is simply a flower misplaced”. I just google’d “weed flower misplaced quotation” and here’s your daily reading.
Dandelions haven’t received the memo….
Dad, lifelong teacher that he was, would be delighted to know his little and delightful eccentricity (not the only eccentricity!) is being publicized.
Have a great spring.
POSTNOTE: Sad to say, that proud Dandelion pictured at the beginning of this post is no longer visible, at least for this year. I put on some heavy gloves and removed the greenery and the flowers.
But that doesn’t mean its end.
It is entwined with the root system of its host plant, so it will be back, and back, and back.
https://thoughtstowardsabetterworld.org/wp-content/uploads/2022/04/thoughts-300x138-1.jpg 0 0 dickbernard https://thoughtstowardsabetterworld.org/wp-content/uploads/2022/04/thoughts-300x138-1.jpg dickbernard2014-05-29 03:18:042014-05-29 03:18:04#890 – Dick Bernard: Dad's Flower
0 replies