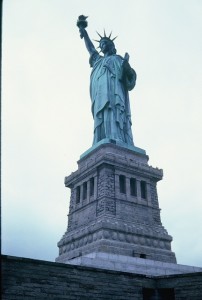 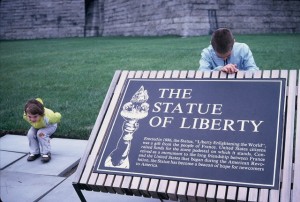 Today is St. Patrick’s Day. In a sense, everybody is Irish on this day (or the weekend preceding or following), for assorted reasons. Yesterday at Church was the annual moving rendition of “Danny Boy”. Here’s a recent version from New York City I saw on YouTube: “Danny Boy”. I don’t have a lick of Irish in me, but I wore green yesterday; today they’ll be serving green bagels at the bagel bakery next to my coffee shop…on the other end of the spectrum will be the buses taking patrons from pub to pub…a bad hangover in the offing for many who, like me, have not a lick of Irish in them….
We are definitely a nation of immigrants. Most of us of very mixed heritage. “Americans”.
And the stories are not all pleasant or nostalgic.
The Irish began to flood the U.S. in the 1840s, and the reason was they were being starved to death back home. Here’s Timothy Egan in yesterdays New York Times.
African Americans are descendants of “immigrants” – slaves of course, counted in our constitution as 60% of a person with no rights whatsoever, only as property value to their owner. Article I Section 2 of the U.S. Constitution makes this very clear early on when it defined persons: “Representatives and direct Taxes shall be apportioned among the several States which may be included within this Union, according to their respective Numbers, which shall be determined by adding to the whole Number of free Persons, including those bound to Service for a Term of Years, and excluding Indians not taxed, three fifths of all other Persons.”
“[A]ll other persons” equaled slaves, of course.
Of course, Indians were an entire other category – they didn’t count as persons at all (The Amherst Smallpox blankets, and such). Natives just didn’t count. As some would still say: “they lost the war. Get over it.”
Amendments 13, 14 and 15 to the U.S. Constitution, all from the 1860s, began to change the reality, but not very well, as we all know.
Some still fight these battles.
Back in November, 2013, an old guy who apparently hates President Obama, got in a little back-and-forth with me, including this gem: “The only reason [President Obama] was elected, was the fact that he is half black. You never hear him talk about being half white.”
Then there’s “Footprints in the Snow”, heading this post.
I’m half German, half-French-Canadian ancestry. Both sides Catholic, which remains my denomination of choice.
Saturday I had a conflict: I was chairing a still-forming organization to celebrate persons who are celebrating various aspects of French-American heritage at the exact same time I had planned to attend a program, “Tracks in the Snow”, sponsored by a group founded in early 2001, in the twin cities, IRG, the Islamic Resource Group.
I’ve enthusiastically supported IRG for several years – I think they serve an important role in helping build inter-cultural understanding.
Their program was very intriguing to me, and I had reserved to attend. It was about 20 minutes from my other meeting. 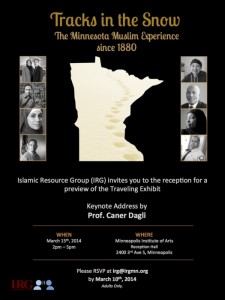 But I had this conflict.
As the French-American group knows, I finally decided to preside at the first part of the meeting, and ask a colleague, Pierre, to take the last part. Such was agreed, and I managed to visit both.
The speaker at IRG was excellent, and at one point talked about the still-conflict in the interpretation of the word “American” in the United States. We are “Americans”, but as in the days of our founding, there are still these psychological barriers by some to accepting certain others as fully a part.
Enroute home I got to thinking about the title and the artwork for the IRG presentation. I remembered something similar from before.
Back in the 1980s and 1990s I had edited a little newsletter for and about French-Canadians in the Twin Cities, and still have the 1000 or so pages, indexed and organized.
It was easy to find the article, “Footprints in the Snow”, and it is presented here for any who wish to read it: Footprints 1986001*
One program talked about Moslems in America since 1880; another about the French-Canadians in America.
I see some similarities.
Have a good St. Patricks Day.
Here’s to understanding, not enmity amongst peoples.
* – (Betty Morency Hudelson did the art work for Footprints in the Snow. She lived on the Mesabi Iron Range in northern Minnesota. Dr. Benoit, who commented on the article, remains a primary authority on the French-Canadian presence in the Midwest, still a resident of Red Lake Falls MN; Dan Gendreau lived in Blaine MN.)
POSTNOTE: Today is 11th anniversary of the beginning of the Iraq War. Yesterday came an interesting transcript from 11 years ago. You can read it here.
There are still some who think we “won” that war, or at minimum, we should keep at completing the win….
https://thoughtstowardsabetterworld.org/wp-content/uploads/2022/04/thoughts-300x138-1.jpg 0 0 dickbernard https://thoughtstowardsabetterworld.org/wp-content/uploads/2022/04/thoughts-300x138-1.jpg dickbernard2014-03-17 05:11:102014-03-17 05:11:10#861 – Dick Bernard: A Nation of Immigrants. "Footprints in the Snow"
0 replies