UPDATE: Here is a December 17, 2010, post which directly relates to the below.
Today, February 26, 2014, is son Tom’s 50th birthday, as well as my wife’s birthday, and a daughter-in-laws…and my Grandfather Bernard’s 144th. Saturday night, at another birthday party, daughter Joni took this picture of me with my 13-year old grandson, Spencer, who has that pride of catching up and now passing his still- 5’10 1/2″ Grandpa in height (you can “measure” us by the door frames behind us!). (The Facebook wags have had a bit of fun with the photo.) 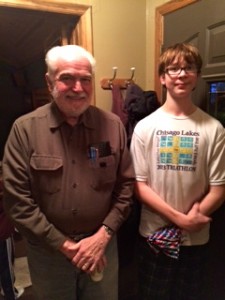 Those who follow this blog know that what appears here is “potluck”. Since initiating this site five years ago, I’ve written about whatever happens to be of interest at the time.
From day to day, I don’t even know what my next topic might be, or even when.
Perhaps I might subtitle these “Thoughts Towards a Better World” with “Life Happens”.
So, in the last week or two, while the death of my 93-year old Aunt Edith on Feb 12 took precedence, other ‘side’ events diverted my attention.
During Aunt Edith’s last days, the daily CBS news was recalling the first visit to the U.S. (see “British Invasion” here) of the new phenom band from England, the Beatles, and their first appearance on the Ed Sullivan Show February 9, 1964, 50 years ago. Not long before that electrifying national event, I had first heard them on car radio, driving between Grand Forks ND and Hallock MN.
It is odd how this specific event sticks in my mind, but it does all these years later.
At the exact same time my wife, Barbara, was pregnant with Tom, our first and only child, who is 50 today, the Beatles made a triumphant appearance on U.S. shores.
Long ago, I gave Tom almost all of the photos I have of him from that era. Here is one of the very few I kept, this from the fall of 1964 in Elgin ND. Tom would have been about 9 months old, then. It appears we may have been watching a football game on television…. Either his Mom, Barbara, or I took the photo.
(click to enlarge all photos) 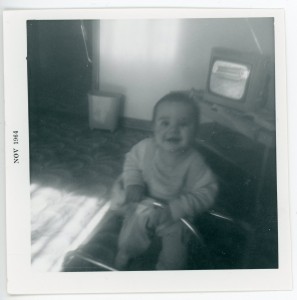 Of course, as everyone in our family knows, Barbara, then 21, had only a few months left to live, passing away of kidney disease July 24, 1965.
So, “Forever Young”, and “The Station”.
Another idol of mine, Bob Dylan, wrote and sang another anthem about living life which has gripped me over the years, Forever Young. (More about “Forever Young” from Pete Seeger and school children in his home town of Beacon NY, here. Pete was a year older than Aunt Edith, and passed away just days before her, January 27.)
Dylan composed that powerful song sometime when Tom was very young.
I also thought, today, about an old Ann Landers column I had first read in 1997, and saved, and saw again, and also saved, in 1999.
It is called “The Station”, and has some suggestions for living life along it’s road.
Here are the columns: The Station001 They are short and well worth the time.
So, farewell, Aunt Edith (and Pete Seeger), and Happy 50th Birthday, Tom.
It is a good time to reflect on the meaning of “Forever Young”, and of “The Station”. 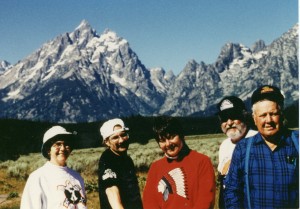 On-site sketch of the Grand Tetons by Tom Bernard August 1, 1995

POSTNOTE: Aunt Edith and Uncle Vince come from a farm family that loved music. And the February 15 funeral included several old standards, movingly sung by Norm and Sue Goehring. The Busch family loved music. So does son Tom, so do I. 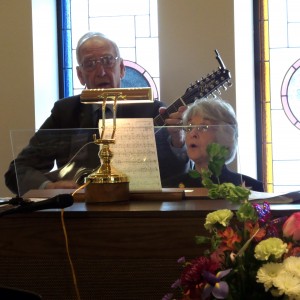 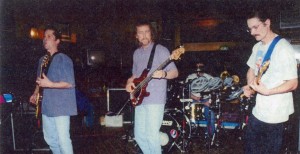 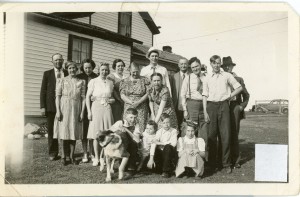 Most of the Busch and Bernard families at the farm, June 1941

Above is a family photo taken on Mothers Day, 1941, including both set of grandparents of Richard (the one year old in the photo), at the Berlin, North Dakota farm. From left, back row: Ferd and Rosa, Edith, Mary Busch, Lucina Pinkney (I think), Josephine, Henry Jr (“Boy”, my Dad), Esther and Henry Bernard, Duane Pinkney, Vincent Busch and unknown. At front Art Busch, Richard Bernard, and (I believe) two from one of the Berning families.
Only three survive at this date in 2014: myself (the one year old); Uncle Vincent, second from right, then 16, now 89; Vince’s cousin Melvin, next farm over, was then 13.
It occurred to me, when looking at the photo, that the oldest person in that photo, my Grandpa Bernard, next to my Dad (the tall man at center) was then 69, four years younger than I am now.
Life travels on.
Have a happy 50th birthday, Tom! 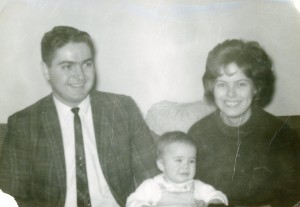