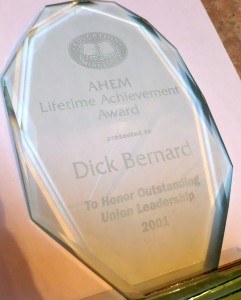 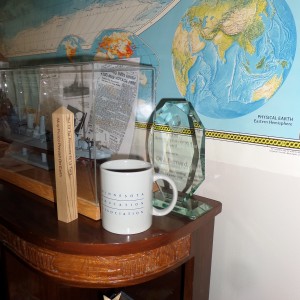 Text: AHEM [Anoka-Hennepin Education Minnesota] Lifetime Achievement Award presented to Dick Bernard to Honor Outstanding Union Leadership 2001
I did not expect to receive such an Award, which I received the year after I retired. Bob Marcotte, another long-time Union leader in the same local, and myself, were the first recipients of this Award, which is now given annually to a union activist by the Union in the largest school district in Minnesota.
I’m proud of this Award.
I began teaching in 1963, in those good old days before things like collective bargaining and such came to public education. Yes, there was “bargaining”, in the sense that a teacher committee could (as sometimes referred to) “bring and beg” requests for a raise. It was my parents lot in life as teachers for their entire careers, which spanned from 1929-72: all single year contracts “at will” to renew or non-renew as the School Board saw fit.
The road to that Award of mine began in the spring of 1968 when I made a decision based on an observation: my teaching colleague, local Teacher’s Association President Ron Swanson, was carrying a cardboard box full of Association files, and in addition was complaining of severe migraine headaches. It was at that moment that I, a young member, single parent of a four year old, decided that I needed to help out in some way, and so it went for over 30 years, most of that as Teacher Union staff. As the saying goes, “been there, done that”. (As an aside, at that time, I was driving the first new car I’d ever owned, a plain-Jane 1965 imported Volkswagen which I purchased, then, for about $1500. It served me well.)
Today’s unions deal more with an entitled generation who have been led to believe they are above things like organizing into groups. There has to be more person-to-person “scratch” organizing than what we became too accustomed to in past years.
There is something to be learned from the past.
POSTNOTES:
1. The organization which gave me the Award in 2001 is part of the organization which is the largest single union in the Minnesota AFL-CIO, Education Minnesota.
2. By coincidence, the beginning of my staff career in the Union in 1972 coincided with the first collectively bargained teacher contract under the Minnesota Public Employment Relations Act (PELRA). The original Act, which remains in effect to this day, included a specific provision for “Meet and Confer” which seems, on reflection, to be quite similar to the Volkswagen Labor-Management Council. “Meet and Confer” gave no decision making rights to the union or employees, but was, and continues, to be an excellent forum to discuss and seek resolution to problems.
The bi-partisan group of legislators and Governors who created PELRA in 1971 knew what they were doing, then.
3. An excellent contemporary “primer” on the psychological underpinnings of keeping people down in a subordinate position is the recent movie, “Twelve Years a Slave”, about a free New York Negro who was kidnapped and sold into slavery 1841-53. The film is based on his own accounting of his experience as a slave in Louisiana (more about that, here).
As we all know, from life, “slavery” manifests in many ways, in many contexts, and can afflict us all.