Last Friday my friend Kathy gave me a plain unwrapped CD of Christmas season music: “Home for Christmas” by Susan Boyle. The CD is very good. That was expected. 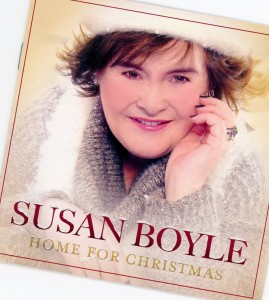 Susan Boyle is known to me.
One of my first first blogs, mid-April, 2009, was about Susan Boyle’s appearance on the international scene. I saw the remarkable clip from her appearance on Britain’s Got Talent on CBS evening news, and listened to the YouTube clip over and over.
So did tens of millions of others.
The original 7 minute clip, referred to at the blog, is no longer available “copyright claim” it says, but there are numerous other existing clips of the same appearance. Here’s one of them.
At the time, I recall, there was ample skepticism about this remarkable performance by this remarkable lady. This was a “flash in the pan”, perhaps even lip synch. She said she wanted to be like the famed Elaine Page….
She won this semi-final, but ultimately another group won the finals of this round of Britain’s Got talent, and on life went.
A few months later, she did a duet, with Elaine Page, before a live audience.
About the same time, her first CD was released. I still have it.
But as with most everything in our lives, time passes by and Susan was “out of sight, out of mind”.
This years CD caused me to re-visit Susan Boyle – what was she up to in her life?
At the same YouTube, I scrolled through the possibilities and came across an extraordinarily interesting 45 minute TV show, released this year, about Susan Boyle today.
It culminates with her recent appearance in Houston at the first appearance on her first world tour.
I opened it yesterday afternoon, expecting to watch only a few minutes, but it was gripping, and I watched it all. She copes daily with life-long anxiety attacks, related to Asperger’s Syndrome.
You can watch it here.
I highly recommend it.
Susan Boyle is a wonderful example of tenacity and courage.
I wish her well. As we all know, from dealing with our own “disabilities”, whatever they are, you don’t just get over them, and they can be a lifelong issue to deal with.
Apparently, Susan conquered her Everest and even if this is her first and only world tour, she deserved congratulations. She’s an inspiration.
And, thank you, Kathy!
Merry Christmas and Happy New Year to all.
https://thoughtstowardsabetterworld.org/wp-content/uploads/2022/04/thoughts-300x138-1.jpg 0 0 dickbernard https://thoughtstowardsabetterworld.org/wp-content/uploads/2022/04/thoughts-300x138-1.jpg dickbernard2013-12-23 06:48:512013-12-23 06:48:51#816 – Dick Bernard: A not-at-all-ordinary Christmas Gift.
0 replies