At 6:09 p.m. September 9 came a brief e-mail: “My mother slipped away this morning, after a rally the last couple of days.  I was with her and she was not in pain, so it was not as difficult as it might have been.  She hated hospitals and did not want any more procedures.”
Eugenie Fellows, who I got to know as Gene, passed away a few days after a bad fall at her home in rural FL.  She was a young-at-heart woman, born December 20, 1913; closing in on her 96th birthday.  Until her fall, she was an active lady.  She would respond to virtually every e-mail I sent, usually with a terse “interesting”, sometimes with a paragraph or sometimes more if the topic brought back some memory or other.  It could be said that she and I “talked” almost every day.
Her daughter, Joy Lominska, who sent me the e-mail with the sad news last evening, described her Mom well.
Here’s a photo I took of Gene (as she called herself to me), in her yard in Florida, in January, 2003.  She was, then, a mere 89. 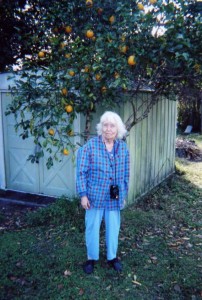 I got to know Gene in some circuitous unremembered way in about 1995.  At the time I was editor of a small newsletter for people of French-Canadian descent, and somehow or other Eugenie found out about the newsletter, and me, and she sent an inquiry, which I later posted in the newsletter.  That began our long friendship, which began when she was a young 82!
Except for the single in-person visit in 2003, we communicated by e-mail and, sometimes, letter.  I hope her daughter takes a photo of her old computer for me.  It was a cantankerous old buzzard which she insisted on keeping.  Sometimes, she said, a paperclip worked wonders getting it running again.  She wasn’t able to read this blog: her machine had decided it had no time for the internet or attachments.  Computers can be that way.  On occasion, “interesting” would arrive here as “omyrtrdyomh”.   No matter.  Type and send….
Ironically, the last piece of mail she received from me was a recent printout of all the blog pieces I had done about Health Care reform.  She would have received it near the time she fell.
She never tired of telling about her life, especially specific memorable events.
Her mother, Mena Hoiland, was Norwegian-American, her Dad, Emile Leriger de la Plante, was French-Canadian.  They married in Crookston MN, and during her growing up years lived in many places.  They were lifelong Socialists, as was she, and they were proud of socialism.  If they were like she was, they weren’t pushy about their political beliefs; neither were they ashamed of them.
She never tired of mentioning marching with her parents in the parade celebrating the ratification of Women’s Suffrage in 1920.  At the time they lived in Milwaukee. She was six.  Somewhere in those years a house guest was Eugene V. Debs.
She enrolled at the University of Washington at age 16, but the Great Depression came along at the same time and interfered with her plans.  She returned to university when her daughter began school, earning a degree in Social Work and later a Masters Degree in urban planning, both at Ohio State.  She worked as a planner for many years.
Her beloved husband, Erwin, preceded her in death by about eight years.  One of their children preceded them in death.  Along with his professional work, Erwin was an author of commentaries on the human condition, and he was a good one.  She loaned me a book he had written.  (I returned it!)
Gene mentioned often her long-time activity as a member of the League of Women Voters, and she was also a long-time member of Womens International League for Peace and Freedom (WILPF).  A dominant memory when I visited her rural home was seeing bookshelves jam-packed with books.  She never stopped learning.   We walked the property and she pointed out this and that.  I sampled the fruit on the tree behind her in the photo: it looked benign, but it would give serious competition to a very tart lemon.   I’m guessing she was a bit amused at her visitors discovery.
Occasionally people come into to our lives who enrich us by their presence, even if at a distance.
Eugenie Hoiland LaPlante Fellows was such a person.
Au revoir, my friend.