Last night, while watching the Daily Blathers (some call it “evening news”; a good friend, yesterday, referred to it more precisely and accurately: “CBSNBCABCFOXCNN”), I set to the task of sorting through the paper flotsam and jetsam from my Uncle’s apartment in rural ND.
Like tens of thousands of others, yesterday, and over time, I was trying to sift and sort through mail, receipts, records, etc., that some friend or relative was no longer able to deal with, due to death, disability, or otherwise.
As I sorted, the blather on the evening news programs was about President Obama’s contrition about the (insert your own words) continuing rollout computer problems of (insert your own descriptor), otherwise officially known as the Affordable Care Act.
Just three days earlier my Uncle had made an undesired but necessary move from assisted living, his home in town for the last six years, to the nursing home down the hall. His stuff stayed behind for someone else to deal with: an oft-repeated story everywhere in this country, every day.
In one box was the specific reminder of why he and his sister moved to town in the first place: 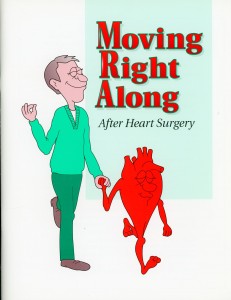 It was a folder given to him after successful open heart surgery in April, 2006. The surgery was the only reason he’s still alive, but (in his opinion) that surgery is held as the reason he never fully recovered and could not return to his lifelong occupation of farming. Whether this is so or not can be argued forever. Nonetheless, he held off the grim reaper for what is now an additional seven years. While he couldn’t farm, his general quality of life was pretty good. And at near-89, why should he still want to farm?
Of course, the surgery, and virtually all of the other medical costs for other dilemmas since then, have come under the protective umbrella of Medicare and supplemental benefits of North Dakota Blue Cross/Blue Shield.
What gave him the wherewithal to financially survive, indeed thrive, as an independent farmer was the Medicare program signed into law in the summer of 1965 by President Lyndon Johnson. That earlier version of “Obamacare” was scorned then, too, as socialized medicine, and it was spared withering coverage by the “blathers” of the time by, likely, two main factors: 1) fewer and less technologically advanced news media outlets; and 2) media reporters who were more conscious of reporting news, as opposed to dispensing propaganda.
Now we are engaged in the great unCivil War of simply trying to implement a new imperfect insurance program (and even more imperfect computer program) that will cover more people more efficiently and effectively than the hodgepodge of legitimate and scam “insurance” that now faces America, and excludes from coverage tens millions of Americans, but not my only surviving Uncle and Aunt, who benefit from an assortment of programs which thankfully exist in their time of need.
We’ll get through this hysteria, I hope. For me, a survival strategy will be to quit watching the endless analysis, the faux news, about ACA, at least as portrayed on CBSNBCABCFOXCNN. It is all a bunch of dangerous nonsense.
POSTNOTE:
In the same ‘sifting and sorting’ session last night, we watched an excellent special of CNN on the approaching 50th anniversary of the assassination of John F. Kennedy. Familiar faces appeared there: Walter Cronkite, Lyndon Johnson, on and on…. Just a short while ago CBS celebrated the 50th anniversary of the 30 minute evening news program inaugurated on CBS by Walter Cronkite in the year 1963. Oh, how things have changed.
COMMENTS: one in the comment box below, and the following as well
from Corky: Just finished my 5 year repeat “internal flushing” of the colon yesterday and apparently good news. Now as to the news pundits who state that all these citizens really like their insurance . Or like the movie , the way we were or something like it.Is America brain dead? When you look at medicare billing and the significant reduced cost by medicare administration and the really miniscule and late payments by the insurance carriers . A $200 Dr. office billing and medicare reduces to $70 and medicare supplement F pays less than $20 (3 months after office visit), shows me the system is very busted and hooray for any proposed changes to health care. Michael Steele GOP guru even said this morning that constructive changes need to be proposed by GOP legislators! Did I hear that comment correctly or am I hearing impaired?
from Tref D: Just a lot of hot air on all sides. Eventually I hope it will work out for many folks.