UPDATE Dec 11, 2013: In early December, 2013, I asked Mr. Elling about the history of the document signed by Pres. Lyndon Johnson and Sec’y of State Dean Rusk in 1965. He recalled that it had originated within the Twin Cities community, particularly Stan Platt and others in business, like himself, and he was directly involved in the initiative. He was a downtown Minneapolis businessman at the time, and he was a co-signer of the final document.
*
A week ago I stopped in to visit my friend Lynn Elling, and he gave me a 18×24″ poster of a 1965 proclamation about U.S, World Citizenship that had been stored in his house, and a 1971 letter from President Nixon’s counsel, John Dean, to then-Republican Congressman Bill Frenzel. Both were big surprises to me, and noteworthy for their content. They speak better for themselves than any translation I could provide. A photo of the poster is below, a pdf of its actual words is here: United States Declaration of World Citizenship The single page Nixon administration letter is here: Frenzel Letter from WH001
(click on photo to enlarge. Poster was warped, thus text is not completely clear. The actual text is the one page pdf accessible above.) 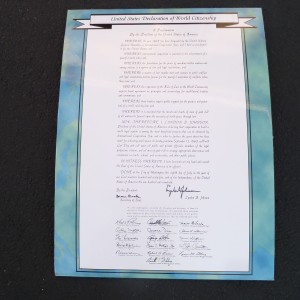 The 1965 Declaration and 1971 letter fit like a glove with two previous Declarations Mr. Elling had given me: Hennepin County and Minneapolis Declaration of World Citizenship (1968) and State of Minnesota Declaration of World Citizenship (1971). (The story of both of these, and a 1972 movie about World Citizenship, are all accessible here. Click on the half hour movie featuring singer John Denver and others, and read the Lynn Elling story as well.)
I was particularly struck by the fact that signer, and probable coordinator, Lynn Elling, was 44 years old at the time. It is important to give such context to past events. Mr. Elling is still active at age 92, but his crucial and important work was done when he was younger.
So, I now have Declarations of World Citizenship from 1965 (U.S.); 1968 (Hennepin County/Minneapolis); and 1971 (Minnesota) (scroll down). I know there were lots of similar Declarations in other places, at the same period in time, all similar in that they were officially endorsed by all manner of political and civic leaders, completely non-partisan. There must have been some national undercurrent flowing at the time.
What might this mean?
I’ve been a Minnesotan since 1965, but I never heard of these Declarations back then. I was a young widower, struggling to just survive.
What was making the news back in 1965-71 was not World Citizenship, but the Vietnam War, and to this day, President Johnson and Richard Nixon are inextricably linked to War, not Peace, as the 1965 and 1971 documents clearly espouse.
I have not yet had the opportunity to question even Mr. Elling about the history of the 1965 Declaration, how it came to be in the first place. I note that Mr. Elling was a signatory on the document, which basically affirms, in Minnesota, the 1965 Declaration signed by U.S. President Lyndon Johnson.
Who lobbied for the Declaration by President Johnson? Somebody had to actively lobby for, likely, an extended period of time. Proclamations are common enough, but they are not dealt with as a routine matter, since the signers know that some day, like now, they can surprisingly resurface somewhere, somehow. They have meaning.
I am just beginning the inquiry about the 1965 Declaration, but on the occasion of 2013 Armistice Day (called Veterans Day in the U.S.), remembered around the world on November 11, I simply want to bring this to the public eye.
(Recently the St. Paul City Council brought back to public attention to the famous Kellogg-Briand Pact of 1928. Declarations can live on, if given life.)
While our country memory of 1965-71 was War; there was, even then, a back-story about Peace, shared by political leaders of both major political parties, and enshrined into assorted bi-partisan actions that live on to this day.
What is obvious to me is that this is a matter that resulted from all sorts of person-to-person conversations at many levels over a long period of time.
It is a hard slog to reach a destination. You need to make the trip first.
POST NOTE: Ironically, and essentially coincident with the discovery of this 1965 Declaration, I was at a meeting with another of my elder heroes, Dr. Joe Schwartzberg, last Thursday night. At the meeting he told us of a short essay he had done in 2006 on “Steps on the Path to Global Justice”, using the conquest of Mt. Everest as his teaching tool. Yesterday, he sent to those of us at the Thursday meeting his short essay, and it is included here, with his permission: Schwartzberg, Steps on the Path to Global Justice May 2006
The Essay includes some acronyms: “CGS” is Citizens for Global Solutions, which previously had been named World Federalist Association or United World Federalists; and which presently is named GlobalSolutionsMN.org. The distinguished history of the World Federalist Association can be read here. Note WFA 1947-1997 History, which was dedicated to Minneapolis businessman and civic leader Stanley Platt.
“ICC”, I believe, is for International Criminal Court.
In his notes to us (members of the Global Solutions Minnesota Board) Dr. Schwartzberg added this note: “The attached essay on what we can learn from the conquest of Mt. Everest is the one I referred to at our Global Solutions Board meeting yesterday. I believe it is relevant to the strategic direction of both our Chapter of GS.org and to the national organization. The essay was written in 2006 and subsequently published in The Federalist Debate. My thinking, however continues to evolve and I would now give more stress to the need for a World Parliamentary Assembly among the desirable reforms note in my penultimate paragraph.”
https://thoughtstowardsabetterworld.org/wp-content/uploads/2022/04/thoughts-300x138-1.jpg 0 0 dickbernard https://thoughtstowardsabetterworld.org/wp-content/uploads/2022/04/thoughts-300x138-1.jpg dickbernard2013-11-09 09:06:352013-11-09 09:06:35#799 – Dick Bernard: The case for World Citizenship.
0 replies