NOTES: I wrote previously to the Audience of the Minnesota Orchestra here.
The group Save Our Symphony MN has an excellent chronology of the history of this conflict. You can read it here: chronology2013-09-25 I’m sure it will be updated.
The Musicians website is here. Support the Musicians. Come to the rally today, and one of the concerts this weekend.
Today is the first day of the second year of the Lock-Out of Musicians of the Minnesota Orchestra.
Late yesterday the Minnesota Orchestra Board cancelled the arrangements for the concert at Carnegie Hall, and no doubt will blame the Orchestra Musicians. I can’t help but see an analogy between the cancellation of the Carnegie Hall Contract, and the Shutdown of the U.S. Government on the same day. But that’s another story.
Rich and Powerful People control public information and most everything else for the Minnesota Orchestra Board; but the members of the Orchestra, on Saturday Sep. 29, rejected 60-0 the last position of the Board. There is a powerful message in that unanimous rejection.
I represented teachers for many years, and I cannot recall, ever, anything near the unanimity of that 60-0 vote. That kind of thing just doesn’t happen. But it did on Saturday.
The third “leg” of this non-functional “stool”, we, the audience, continues to be ignored in the public conversation. But we have all the power, if we choose to exercise that power.
If we want to retain a world-class orchestra in this community, it’s up to us; if we’re satisfied with average and ordinary we’ll get that too. It all depends on whether we now support the locked-out musicians, or admit defeat ourselves.
Yes, we audience members control what we’ll get. But we cannot be passive. We must act. Nobody can do it for us. We are key.
What I plan to do is at the end of this post.
There is limited interest within the community at large about the disaster that has been the Minnesota Orchestra situation for the last 12 months. This isn’t a surprise to me. Most citizens, likely, have never been in Orchestra Hall; they weren’t told what this loss would mean. It will be their permanent loss if the Orchestra is diminished in stature, but they won’t realize it, at least directly, or immediately.
So, we audience members are crucial. We know the implications to this community of this potential loss of a community treasure.
Two contextual hypothetical examples for your consideration:
1. In my town of Woodbury there is an old farm house and farmyard, Heritage House, in a small park at the corner of Lake Road and Radio Drive. This tiny house dates back to 1870, and it exists and continues solely because of a loyal small group of people who think it is significant to local history. A couple of years ago, I took an interest in it. You can see the results here.
WHAT IF the people who lovingly maintain Heritage House lost interest; or new city leaders said we’ve got better use for that property; or we don’t like that dumb old building – let’s replace it with a more modern facility?
Ridding our town of Heritage House would be noticeable and irreplaceable loss for the total community. Only the advocates who appreciate the importance of history could save the place. 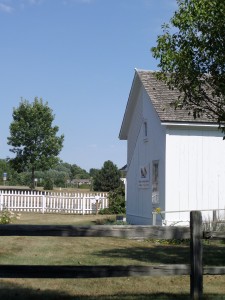 2. But there’s a much better example about what this theft of our orchestra from us will mean, in my opinion:
We are part of a very large metropolitan area – over 3,000,000 population. And most of our children and grandchildren go to large schools in large school districts.
But there are small school districts too, high quality ones, which have few students and teachers and are supported by a smaller community…whose relatives and grandparents live elsewhere.
What if one of these small school districts was taken over by a School Board, unelected by and unaccountable to the citizens of the town; a Board which changed the education plan, and in a dispute with the teachers who made the district great simply locked the school house doors for an entire year, completely ignoring the children and the citizens.
Would such an action have ramifications in the community? Would its effects ripple through the surrounding larger community as well? Would it have long-term consequences for future generations, including the children?
Absolutely yes.
We, the audience, are “the community” which has been ignored, now, for a year. The musicians have been our advocate. Now it’s our turn.
We can choose to do nothing, and accept fate as served up to us, or we can act in the many individual ways available to us.
Not only does this Board have to change its ways of doing business, including reforming itself; but it has to feel the heat from us in ways which it best understands.
As for me, I will strongly support the Musicians as they seek a fair agreement; I will not support the management of this Orchestra in its attempts to unilaterally implement a new business plan which it didn’t even ask for my input; nor did it clearly ask for my help when (it appears) help was needed.
The Board of the Minnesota Orchestra locked me out for an entire year. I will not darken the doors of Orchestra Hall until the musicians, by ratification of their contract, say its okay: come back.
It’s time for us all to stand up and be counted for as long as it takes.
That’s my stand.
Responses (there may also be on-line responses – note tab at end of page)
from John G., Oct 1, 2013: Could the locked-out musicians of the MO on their own perform at Carnegie Hall at the planned time, and could Osmo on his own (after resigning from the official MO) rejoin them there to conduct the concerts? The musicians would have formed the Minnesota Diaspora Orchestra. (Rehearsal space needs to be donated within the Twin Cities.)
from Larry H, Oct 1, 2013: Thank you Dick for your continuing posts. As for me, I also will not return as a patron until the audience members are invited to return by the musicians.
Meanwhile, the vision of the MOA led by Mr. Campbell and Mr. Henson seems to be more clear. Public posturing aside, the avenue they have chosen is leading us to a lesser quality product that will be marketed as a “world class orchestra”.
Today we await the fateful decision of our master conductor. Likely, Osmo Vänskä will resign and seek other opportunities. I was in the audience several years ago when Osmo’s contract was extended and the agreement was announced at Orchestra Hall. It was stated by the MOA representative that we were in the midst of the golden era of the Minnesota Orchestra. This golden era ended abruptly one year ago today as the lock-out of the musicians began.
It is difficult to envision an excited ticket base captivated by an orchestra presenting a full-season of concerts led by a substitute conductor. Any artistically literate audience member, who has valued the magnificent interpretations of masterworks conducted by Osmo Vänskä, will quickly notice a different product. The absence of our familiar resident world-class artist-musicians will only augment the MOA’s worst-case scenario.
The legacy of the orchestra has been tainted and compromised. I doubt if the Henson vision of the Minnesota Orchestra will have the same level of patron support in future years, Minnesota’s “destination orchestra” is effectively being disbanded, and after a year void of concerts, a large portion of the audience has turned to other ensembles and venues with their budgeted entertainment dollars.
Looking to the future, it is hard to imagine if a lesser orchestra will command the same level of ticket pricing. Meanwhile, the renovated Orchestra Hall has a reduced seating capacity. It seems reasonable to believe that the audience revenue stream will be reduced as the MOA seeks sustainability after its public relations debacle.. Furthermore, some angered patrons, feeling ignored and disenfranchised, will simply not return to Orchestra Hall.
It is hard to believe that the donor base will be sustained. Reductions in giving seem imminent. Meanwhile, the MOA can offer a sparkling new lobby that leads to an empty concert hall.
The Henson-Campbell vision has now effectively altered the cultural fabric of culture in our community. All of this happened without accountability to the main-stream audience.
The clear solution, with an artistically sustainable future in a stabilized economic environment at Orchestra Hall, needs the locked-out musicians to again be the Minnesota Orchestra’s artists in residence.
Another thought … general public of MN doesn’t much care, nor does WCCO … WCCO is across the street yet has barely covered this story … even under normal circumstances they give the orchestra limited, if any coverage … yet, sports get continuous free advertising.
https://thoughtstowardsabetterworld.org/wp-content/uploads/2022/04/thoughts-300x138-1.jpg 0 0 dickbernard https://thoughtstowardsabetterworld.org/wp-content/uploads/2022/04/thoughts-300x138-1.jpg dickbernard2013-10-01 05:58:222013-10-01 05:58:22#782 – Dick Bernard: To the Audience of the Minnesota Orchestra. Thoughts about the Future at the one-year anniversary of the Lock-Out
1 reply