The ten days between Friday, October 11, and Monday, October 21, were fascinating ones for this, yes, “old-timer”. (I put those words in quotations because it’s all relative: the day I pass on, at whatever age that happens to be, there’ll be somebody who will have just said “he was just a kid”; on the other hand I’ve been in Medicare ranks for eight years already….)
But the past ten days were fascinating.
We spent the bulk of the time at a resort cabin near Wisconsin Dells, Wisconsin, just having a quiet vacation. Were it not for television and the local paper of record, the Wisconsin Journal, we would have had no clue from the people around us that America was (maybe) facing default on its debts for the first time in its entire history. I didn’t think that even the current Congress would dare jump off that fiscal cliff, but we were too damned close.
Meanwhile, at the Dells in fall mode, you would be hard-pressed to find evidence, from the people, that we were at the brink of something very bad.
On the Dells boat cruise we watched the dog leap the same small chasm photographer H.H. Bennett had his son leap several times in the 1880s enroute to his famous photographic experiment with a new-fangled speed shutter. It’s less than a six-foot jump, but I bet the young man didn’t have the safety net like today’s leaping dogs do! (An article I read suggests the photo had a “bit of flim flam” to it, but, even then it was for that generation of rubes! I wouldn’t have done that jump as a kid!)
(click to enlarge) 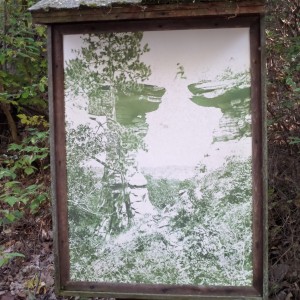 “Book-ending” the beginning of the quiet week at Christmas Mountain resort, on Friday, October 11, we attended the festive preview of a film in production about the French in Minnesota.
French filmmaker Christine Loys observed that there is a great deal of evidence of the French presence in Minnesota, going back as far as the 1600s, and is near production stage on her film, En Avant* (“Forward” – the motto of the City of Minneapolis.) There were several hundred of us packed into a studio at the Ritz Theatre in northeast Minneapolis, and the event was festive and most interesting.
Here’s a picture: 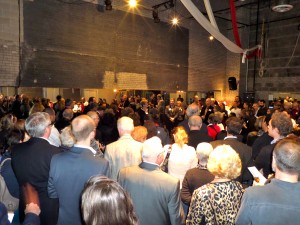 And earlier this evening, the other book-end, I was in the audience for a well-attended talk by Matt Rothschild, the recently retired long-time editor of the well known magazine “The Progressive”. 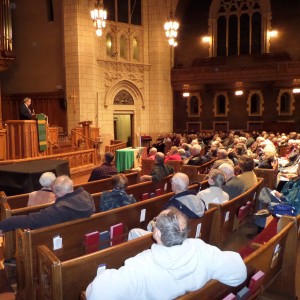 Rotchschild emphasized the more dismal other end of our country: war, drones, spying on each other…. All necessary topics, but certainly not uplifting.
Analyzed separately, as individual frames, long analyses could be written about the meaning of each event we experienced the last ten days…and millions of other similar events happening everywhere, including a number of which I choose not to even mention here, from within the last ten days. Life is not a series of still pictures.
I prefer to look at the “bits and pieces” very briefly described above as part of a more hopeful “whole”.
In some sense or other, while the problems we face are daunting, I think there is still a sufficient decent core to humanity for all of us to survive, and not just in America.
We each can analyze as we wish, but we’re part of a whole, which is what bits and pieces ultimately make, regardless of how scattered and random they might seem.
En Avant! Together.
NOTE: I have a long-time habit of buying books and then not reading them for a long period of time. This trip, one of the books I took along, and decided to read two years after I purchased it, was filmmaker Michael Moore’s autobiographical “Here Comes Trouble”. Disclosure: I have always liked Michael Moore. I read the book at the Dells, and I found it very interesting. Check it out.
* – You can view the 3 minute trailer of En Avant here. The Password is Minneapolis.
https://thoughtstowardsabetterworld.org/wp-content/uploads/2022/04/thoughts-300x138-1.jpg 0 0 dickbernard https://thoughtstowardsabetterworld.org/wp-content/uploads/2022/04/thoughts-300x138-1.jpg dickbernard2013-10-21 21:37:122013-10-21 21:37:12#790 – Dick Bernard: Default Week, 2013. America is going to hell…or it isn't.
0 replies