PRE-NOTES: Directly related to the below post is this one published two days ago, on “Conversation”. Overnight came a long and excellent rendering of what is happening in Washington now. The first three paragraphs of the post catch the essence.
*
“You cannot negotiate with people who say what’s mine is mine and what’s yours is negotiable.”
Tweet from James Morrison, Oct 10, 2013
Some weeks ago I was at a meeting, and a couple of folks were sharing thoughts learned at another meeting some weeks before… (You’ve been there, done that. “Hand-me-downs” are very useful, often.)
One of them presented us with a single sheet of paper with this single illustration:
(click to enlarge) 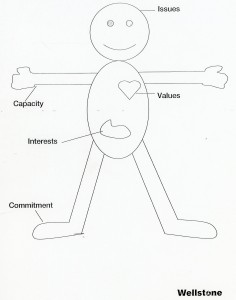 (Here’s the pdf for later use, if you wish: Stick-Folk Wellstone001
What is conveyed is a simple lesson about everyone of us as beings wandering around the planet. The words hardly need explanation.
Of course, nothing in this world of ours is simple: if you match up this stick-folk with a second stick-folk, there will be differences in values, interests, etc. We’re not all alike. Think married couples, BFFs (Best Forever Friends), and on and on….
How about a nation of well over 300,000,000 stick-folk, perhaps three-fourths of them considered as adults and potential decision makers. That’s the U.S. of course. How about 7 billion people? The World.
Yesterday I used Mr (or Ms) Stick-folk in a small meeting. But I endeavored to spread her (or his) horizons just a bit.
I added to the illustration a bunch of circles… 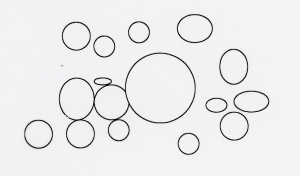 …and asked the participants to put an “F” in the largest one.
Let’s call the “F” “family”, I said. Every one of us is part of many circles. In our little group, we could have come up with quite a list: colleagues at work, church, on and on and on.
But in these circles we know people, and here comes possibilities and complications.
I added a vertical line, with a plus sign at one end, a minus at the other, with a middle point. Let’s say the perfect person, the big plus, (from our point of view) is our self.
If the world believed exactly as I did, wouldn’t all be wonderful?
Of course, this isn’t true. We all know people who are diametrically opposed to us (“how can they be so stupid?”).
They say the same of us. The hard Right and the hard Left invest their time and energy shooting at each other across the massive middle, making points (“kills”?) but winning nothing. They dominate the communication we see on-line and in other mass media.
Can a determined stick-person permanently impose his/her world-view on everyone? Of course not. In comes negotiation.
At the meeting, I observed that if each person could positively impact on one or two others, a great deal could be accomplished. But this does not happen rapidly, and does not happen by duels at 30 paces. It is called building relationships, which fills many books by itself.
Up the side of the sheet I had several numbers:
6 – 61
8 – 78
10 – 56
12 – 76
9 – 6
What do these mean?
Very simple: in 2006, in Minnesota, only 61% of the eligible voters actually voted. 2008, 78%, etc. And Minnesota is ordinarily a very high voter turnout state, often leading the nation.
If those of us who are troubled by the Tea Party are honest, we will note that 8% or so fewer people voted in 2010 than in 2006. These are people who stayed home for all sorts of usual reasons, including Obama didn’t get single-payer health care, didn’t close Guantanamo etc. At the same time, the angry Tea Party folks came out en masse. (The source of the raw statistics for any wonk out there is here. You can find data for any state.)
In the wake of 2010 came Congressional District redistricting and the like, controlled in many places by those same angry folks that so vex us now in Washington and in many states. We’re finding that anger is not a good way of doing business, for a country, or a state….
What about that last “9 – 6”? That was the voter turnout (6%) in the 2009 School Board election in our prosperous children-laden suburban community. What a shame…. Why did people not vote, then? Your guess is probably accurate. You’ve been there, done that, yourself.
It is true, what the Tweet that leads this post suggests. And it is also true that this is how “negotiations” are happening, as we speak. “You” [the other] “can go to hell”.
When this mess is over, which it will be, some day, it would be good for all of us who happen to have lived that long, regardless of political ideology, to do some serious thinking about how we stick-folk can build our country of diverse opinions and spirits, rather than tear it to shreds.