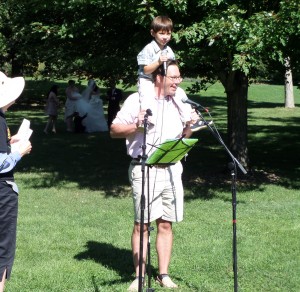 Zander, on his Dad’s shoulders, expertly expounds on the importance of protecting the environment (see below) at the Peace Site rededication September 22, 2013 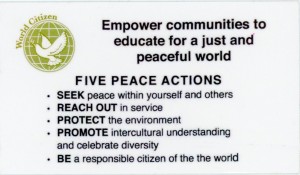 These Five Peace Actions were focus of the Peace Site Rededication Sep 22, 2013

“Do I not destroy my enemies when I make them my friends?”
― Abraham Lincoln
remembered by Minneapolis Park Commissioner Brad Bourn on Sunday, September 22, at Lyndale Peace Park.
Saturday, September 21, was the Annual United Nations International Day of Peace. In Minneapolis, I attended the observance of the day on Sunday, September 22, at the beautiful Lyndale Park Peace Garden (See Lynn Elling, below). An organization in which I’m involved, World Citizen, rededicated the Garden as a Peace Site. The ceremony and attendant activities were most impressive and meaningful. The Peace Garden was first dedicated as a Peace Site in 1999.
Sunday’s event, and other recent happenings bring to mind the subject line of this post.
Three days earlier, I had reason to make a brief stop at St. John the Evangelist Church in Wahpeton ND.
I arrived there about noon, and as I parked the car, I noted a U.S. flag-draped casket being taken from the church to a waiting hearse. I was not there for the funeral, so I didn’t know who had died, but I rather hurriedly took this photo (click to enlarge) 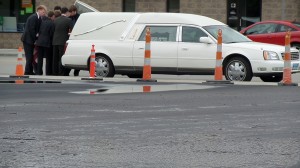 Entering the Church, I found the person in the casket was an 89 year old man, Dale Svingen, and on the table was one of those “please take one” handouts entitled “The Australian Soldier”, a recollection of World War II. The recollection can be read here: Australian Soldier001. It speaks well for itself.
War is Hell, but it builds camaraderie and team spirit and solidarity. War destroys, but connects….
The experience led me to thinking of a recent visit with my friend, Padre Johnson, a man with many gifts.
Recently, I met with Padre and he gave me a copy of a remarkable sketch he’d done from a photograph from one of the deadliest battles of the Vietnam War (below). Padre mentioned that he’s the guy in the helmet in the foreground, and in an accompanying note to me said that Adm. Elmo Zumwalt – a name very familiar to military of the day – said, a dozen years ago, that this sketch was “the most powerful artists rendition of the Face of War that he has ever seen.” Padre Johnson’s text accompanying the sketch is here: Padre J Viet Combat003 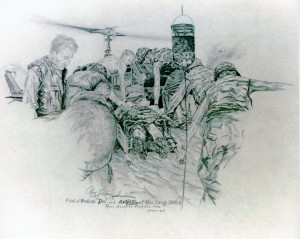 photo copy of Padre Johnson sketch from 1968, used with permission of the artist.

War is Hell, but it builds camaraderie and team spirit and solidarity.
War destroys, but connects. Padre was enroute to the same convention of Special Forces he’d been keynote speaker for when Adm. Zumwalt made his comments. Padre’s mission is Peace, has been so for many years, including in Vietnam where as a Medic he didn’t differentiate between friend and enemy when it came to treating casualties of war. They were all persons to him.
Which leads to the gentle observance of International Day of Peace September 22, 2013.

I took my friend, Lynn Elling, to this observance. Lynn is, among other things, founder of World Citizen, the organization rededicating the Peace Site at the Peace Garden.
A Navy officer in both WWII and Korea, Mr. Elling, 92, has been a lion for peace ever since he saw in person the horrible remnants of war at Tarawa Beach, and later at the Museum remembering the bombing of Hiroshima.
Mr. Ellings role this pleasant Sunday afternoon was simply to relate his story to whomever wished to stop by. He also gave his comments on the importance of everyone being, truly, world citizens. We are, as he likes to say, all travelers on the spaceship earth…. 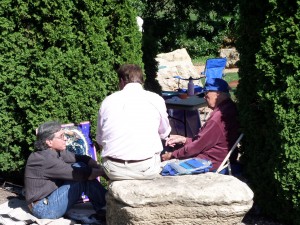 Lynn Elling, at right, visits with folks about his experiences and beliefs, Sep 22, 2013

I could add many more stories about veterans I have known. Some I’ve written about: Frank Kroncke went to prison for his actions against the Vietnam War. In my mind, he’s a combat veteran, no different than those folks in Padre Johnsons picture. Bob Heberle, who recently died, was also a veteran.
They, too, saw War as Hell. And they, too, made connections with people.
I note that all of those listed above are men. In relevant part, they come from a time when combatants – warriors – were men. They come from the era of the Draft, where military was not voluntary; where disagreeing with the Draft was a punishable offense. I was one of them: U.S. Army 1962-63; today a member of the American Legion.
At the International Day of Peace, Sunday, most of the participants and organizers were, I noted, women. But by no means exclusively.
With the possible exception of Mr. Svingen, who I don’t know except for the writing included above, all the other veterans were and are staunchly for peace in all of its manifestations.
I see lots of hope for peace, if we all work together towards that objective.
As I said after Bob Heberle’s funeral, “let’s talk, all of us who are interested in peace and justice.”
We need to. Let’s work for a more peaceful world. 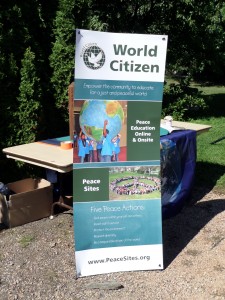 How about having your organization become a Peace Site? 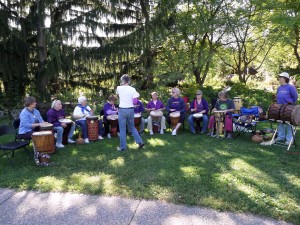 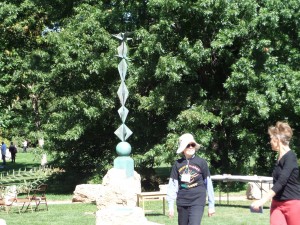 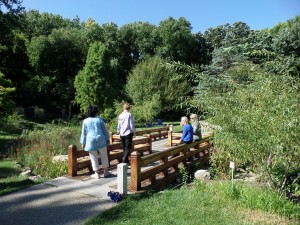