The old St. Joan of Arc Church in Minneapolis was filled to overflowing today, the crowd there to remember Bob Heberle, a man of many talents but above all a passionate advocate for peace and justice.
(click on photos to enlarge) 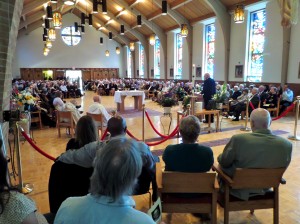 The program for the Memorial Service is here: Bob Heberle Sep 14 2013001. His bio and suggested memorials is on page four of the program.
The essential word from/about Bob was, according to Fr. James Cassidy, “Gratitude“.
This caused me to think back to my 2012 Christmas message at this space, where I included an absolutely remarkable video on the topic of “Gratitude”. I hope you can access and watch it. (You can find it on YouTube, search Louie Schwartzberg Gratitude). It is ten minutes of beauty and inspiration. Perhaps Bob saw it last December when I sent it to my list, of which he was part for many years.
For those at the Mass celebrating Bob’s life, there are many memories.
I’d like to share some brief thoughts, one of which I know Bob and I would disagree on (he was on my e-mail list for years: when I searched my ‘from’ file on my computer, this is the first e-mail I found from him (there may have been others, earlier, but, you know, computer crash….”): Bob Heberle Nov 10 2005001. It wasn’t planned this way, but the e-mail tends to exemplify past tensions continued to the present day.
Bob and I had so many parallel paths: teaching, teacher union activism, Veterans for Peace, on and on and on. But while our paths were parallel, they rarely intersected directly till the last few years. He apparently attended the meeting of Vets for Peace; I didn’t. Usually I would see him at Vets for Peace gatherings at the USS Ward at the Veterans Service Building (Nov. 11) and Memorial Day (Vietnam Memorial at the State Capitol).
He was no wallflower, but at these events he melted in, I’d say.
I couldn’t find any specific photos I took of him at those events.
In recent years I’ve found myself seriously at odds with what is called the “Anti-War Movement”, Bob’s “branch of service”. That didn’t make he and I antagonists at all; or me an antagonist of the movement itself. But I have lobbied for at least a conversation about the real differences I see between the impact of the words “Anti-War” and “Pro-Peace”. Bob and I irritated each other about what was, to each of us, an obvious truth. But we had the same objective: Peace and Justice
I’ve said it.
That’s all that needs to be said. Except I’ll now, sadly, take Bob Heberle off my e-mail distribution list.
At the end of todays service we all sang “Let There Be Peace On Earth” which reminded me of my Christmas letter in 1982, written a week after I was at the dedication of the Vietnam Memorial on the Mall in Washington DC. You can see the letter here: Vietnam Mem DC 1982001 The cover of that Christmas letter said: “Let There Be Peace On Earth”….
Bob Heberle is one of many heroic presences in my life, willing to witness for a better world…and if you look at the flag on this post, it is Thoughts Towards a Better World.
Au revoir, Bob.
Let’s talk, all of us, who are interested in peace and justice, and find better ways to work together. 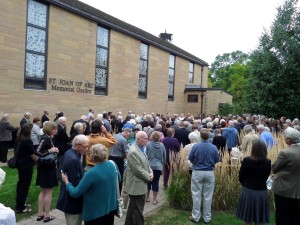 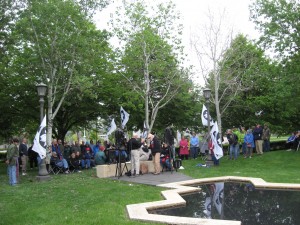 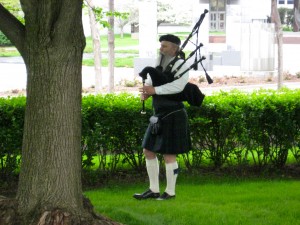 POSTNOTE Sep 15, 2013: I can’t shake from my brain the thought that someone, some reader, will wonder to themselves “will anybody come to my funeral?” Bob was, apparently, a hard act to follow.
Perhaps to give a little context, six years ago it fell to me to be custodian for a relative, Mike, who was essentially friendless (and didn’t go out of his way to do friendship). He was mentally ill the last 25 years of his life, on permanent disability, but “walking wounded”.
Before he died, I found in his papers his final instructions to the local funeral home in a city far from here: “As far as any funeral service, that would be nice. However, I doubt if I would have more than two or three people attending. I guess I am kind of a lone wolf.”
He died Nov. 7, 2007. His prediction was pretty close. There were six of us at the cemetery when his ashes were buried; there were, however, perhaps 30 or more at an informal service at the assisted living place he lived his last few months. Few knew him.
But Mike has had a lasting impact. So has Bob. So has everyone else who I’ve witnessed walking the final mile. They all have something to teach we, the living.
And we should not care who might come, or not, to our performance on earth, rather do the best we can with the time, talent and riches we have remaining on earth.
COMMENTS:
from Chante W, Sep 15, 2013: Thank you, Dick … for being honest and with heart.
I couldn’t stay for the bell ringing as I was posting the flag at the Mendota Pow Wow. I hope he was well represented ~ as I saw many VFP’ers there. [NOTE: there seemed to be about 15 of us standing in Bob’s honor at the Bell Ringing]
I am with Veterans For Peace because of Bob. He got me introduced to folks and really made an effort for me to feel comfortable enough to tell my story. That is not to say there wasn’t some irritation along the way and disagreements about the office, ect., but there was never any grudge holding or animosity … I really appreciated his being willing to get out there and best as he could, make a difference. I loved him dearly as I do most of my brothers.
Thanks again ~ Hugs
https://thoughtstowardsabetterworld.org/wp-content/uploads/2022/04/thoughts-300x138-1.jpg 0 0 dickbernard https://thoughtstowardsabetterworld.org/wp-content/uploads/2022/04/thoughts-300x138-1.jpg dickbernard2013-09-14 16:02:092013-09-14 16:02:09#775 – Dick Bernard: A Fond Farewell to Bob Heberle, Veterans for Peace, "Let There be Peace on Earth"
0 replies