Sunset August 31 was 8:02 p.m. CDT in rural Ashby MN. At that time I went outdoors to try to catch the moment in a snapshot:
(click to enlarge any photo) 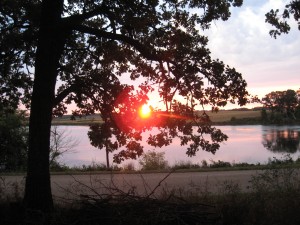 (A small album of additional photos is on Facebook, here.)
Behind me, indoors in the small farm house, now a home and retreat place for family members, Patty Kakac, Anne Dunn and friends were presenting an enchanting “Grandmother Voices” concert. The “house” audience was only 18 of us, and it had taken us 7 hours, to and from, to get to the show, but it was an awesome and inspiring evening. Patti sang, and Anne shared fascinating stories. Part of me wished that the whole world could experience what we were experiencing; the other part of me, selfishly, reveled in the special time for just the few of us.
Both women perform gently, from the heart, taking their listeners into the subject of their song and story. They are serious and they are humorous, and their new show is a blend of two styles and different traditions. Except for my short trip outdoors to catch the sunset, I was enthralled, and I think the same could be said for those of us in the farm house living room.

(You can hear Patti sing in this YouTube segment. On occasion, Anne Dunn has written for this blog. Links for Apr 12, 2009, May 3, 2009, Dec 13, 2012, Jul 18, 2013 are here. In 2000, she was the person behind Whispering Tree, a CD for school children which may still be available in some libraries.)
We all had an additional and unanticipated special treat on Saturday night.
Enroute to La Farm, a short distance west of Alexandria on I-94, we were slowed by a powerful thunderstorm with high winds and traffic-stopping rain. Since our destination was to the west, we called to inquire about the weather there. Indeed, the powerful thunderstorm had passed their way, earlier.
On the country road to the farm a downed tree nearly blocked our path, and in the yard, we were told that the power was out.
So, we watched the concert, from 7-9 p.m. in the dimming light of the sunset streaming through the window behind the performers. And then dusk, and then dark. Out came the candles, and the last of the concert was in the dark.
For me, and I think for the others too, the separation from electricity only enhanced the evening.
La Farm house reminded me of my Grandparents pioneer house in North Dakota: originally a very small rectangular house with downstairs and upstairs, with later add-ons like kitchen, bathroom, bedrooms…. Sharon Henneman, a grandchild of the original La Farm inhabitants, shared this story about the house and home: La Farm – a story remembered
Grandpa was a farmhouse fiddler, good enough to have a small band for neighborhood dances “back in the day”. From about 1927, the whole family gathered around the piano in the living room to sing songs.
Back then, there was no electricity, no interventions by man, other than lamps. There was no thought of power outages. The weather was as it was.
It was nice to experience, in a sense, the good old days Saturday night in the living room at La Farm.
I wish I could transmit last night to all to you. I can’t.
Maybe you have your own memories of similar days of old.
(Enroute home, about 11:00, a message came to us and others: the power is back on. Somehow, it was anti-climactic. That power outage was really an addition to an already rich evening.)
NOTE: Patty Kakac can be reached at pattykakacATgmailDOTcom. Her phone 320-834-4445. (See Patty’s comment after the photos) I have her 1998 CD, Patchwork, which is wonderful. I think it is still available through her. It brings the old days to life, as she and Anne Dunn did again Saturday night. 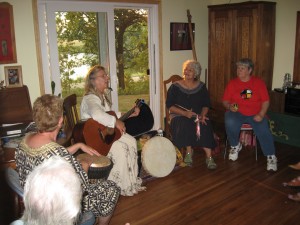 Patty Kakac and Anne Dunn, a half hour before sunset. 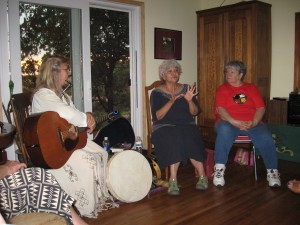 Anne Dunn tells one of her stories. Night has about fallen. 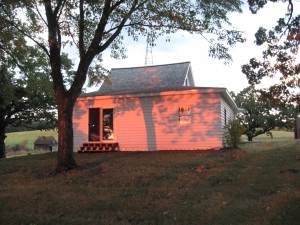 La Farm at Sunset, the original two story pioneer home essentially surrounded by later additions. The “concert hall” was behind the glass doors at left. 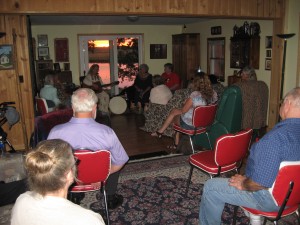 As dusk approaches, the concert continues, soon in the dark!

from Patty Kakac, Sep 3, 2013: I am enjoying reading about the concert from out there in the audience. Your writings about going back to childhood days reminds me of the song I wrote for a play called “Playing with Memories”. We started writing the play by gathering elder people together to tell us of their memories. So many recited the very same thing you have about the music…someone with a fiddle, someone on a piano. So I wrote the song using that theme. My method of writing these sorts of songs is to simply go through the words the people say and fit them together, somewhat like putting a puzzle together. Here are the words to the song…thought you might enjoy them. I had thought about singing the song that night but there wasn’t time or place where it fit in.
Thank you for such a beautiful review.
(It’s a waltz)
PLAYING WITH MEMORIES – lyrics and music by Patty Kakac
Playing with Memories so I can recall
People and places I love most of all
And when shadows of life darken my day
Playing with Memories chase the dark clouds away
Mama cooking in the kitchen would sing
Sister in the parlor made the old piano ring
Soft, lacey curtains blowing in the breeze
These are a few of my memories
Papa would bring out the fiddle and bow
Neighbors would come as soon as they’d know
We’d push chairs and table against the wall
Turn the old farm house into a dance hall
I’ve loved you all the days since we first met
How you danced in my arms I’ll ne’er forget
I’ll cherish your love as long as I breathe
Forever I’ll hold you in my memories
Patty was responding to this comment to her, Anne Dunn and the hosts at La Farm by myself:
Saturday night keeps rattling around in my brain, and I need to let the thoughts out!
To be honest, if [our guest, Christine] had not been interested in going out the La Farm, we probably wouldn’t have gone. We’d heard Patty and Anne doing a preliminary version of their show the previous year at my sister Flo’s, and the six hour round-trip was not especially appealing.
But, we went, and the power went out, and it was one of the most singularly powerful evenings I’ve personally experienced.
And the storm and the power outage enhanced the experience.
Saturday night we basically experienced the old days going way back before things like electricity and modern conveniences like indoor toilets.
Back then, what came to La Farm, came, of course, just like Saturday, a storm came through. It could have been welcome, or it could have brought hail, or a tornado. It simply happened.
And there the people were, isolated, coping as best they could.
But then there was the concert.
I have done a great deal of family history, and as I said in the blog, my roots, particularly my mother’s side, was full of farm music.
So, here we sat in a dark room, lit by a couple of candles (secretly, I wished the LED lights would be turned off!), in a community of music.
Back in the olden days, I know from family and other stories, these country gatherings were primary recreational and social events.
There were dances in hay mows (the upstairs of barns); community halls, saloons, houses…wherever people could gather and somebody had a fiddle, or a piano, people passed the short time between work and dark (except in the summer) doing what was done Saturday night.
If the original part of that house could tell tales, it would probably remember such goings on from time to time. They’d be small and informal, but unless the home owners were anti-social, they’d be happening. And to survive out there, you had to have an element of being social – what if the barn burned down, or such.
Today we can (it seems) manage everything. Cell phones get us out of the house when the phones don’t work; we can watch perfect events in perfect color and high definition, with perfect sound systems without ever having to interact with another soul.
Saturday night, you were, in my opinion, in pioneer days, not only in Minnesota, but most everywhere else in the developing United States and Canada.
It was really a great privilege to be there.
I could go on and on.
Maybe some of those on the copy list could add more….
Thanks to everyone who made the evening possible.
https://thoughtstowardsabetterworld.org/wp-content/uploads/2022/04/thoughts-300x138-1.jpg 0 0 dickbernard https://thoughtstowardsabetterworld.org/wp-content/uploads/2022/04/thoughts-300x138-1.jpg dickbernard2013-09-01 16:46:332013-09-01 16:46:33#768: Dick Bernard: Heritage. An Enchanting Evening at La Farm