Post #756, here, on Garry Davis, directly relates to the following. The Facebook album, simply entitled “Frank K. and friends”, dates from the summer of 2006, and February, 2008, in the Minneapolis-St. Paul MN area. It consists of 44 photos I took at the time.
Editors Note: In the summer of 2006 I was privileged to meet and begin to get to know Francis X. Kroncke, whose life story is interesting and compelling and instructive.
Nearing the end of the Vietnam war era, in 1971, Kroncke paid a immense price for witnessing to his anti-war ideals, ideals which were shared by immense numbers of Americans at the time. Citizens were sick of War. Other of Mr. Kroncke’s close friends paid a similar price. They came to be called “the Minnesota Eight”. Much of their support came from within Christian Churches.
Daniel Ellsberg testified at Kroncke’s trial.
Carrying forward the general theme in the Garry Davis piece referred to at the beginning of this post, Kroncke and other Peace activists (Peace heroes) were punished for witnessing for Peace. On the other hand, our “War heroes” are also punished, by being killed or maimed for life, or ending up imprisoned as POWs. As a society, we seem to revere “heroes of War”; and revile “heroes of Peace”. Why is this so? How can the conversation be changed? Or are we doomed to ever more rapidly assure our own destruction as a people? #758 and #759 encourage conversation, including comments on-line.
“Francis X” (the “X” is for Xavier) self-description is here.
Recently, Frank sent me a 21 page Essay simply entitled “The Earthfolk Vision”. I asked for and received his permission to share this essay, which I believe provides lots of food for thought about many aspects of our lives. I especially recommend it for persons interested in making a difference in this world of which we are all a part.
Here is the Essay:Kroncke-Earthfolk
Mr. Kroncke lives and write in a small town in southwest Wisconsin. His website is Earthfolk.net.
His writings are available as e-books at outlaw-visions.net
(click to enlarge photos) 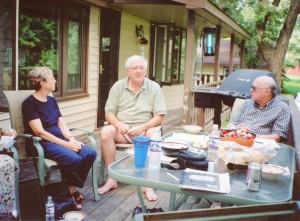 COMMENTS:
Dick Bernard: Personally, during the 1960s, I had a different role than Frank Kroncke, though my heart would have been, and is, with him. I was in the U.S. Army at the time the Vietnam era began, and in fact was slogging around South Carolina on Army maneuvers when the “I have a dream” day of August 28, 1963 happened on the National Mall in Washington, D.C. I was newly married at the time.
Two years later my wife, Barbara, passed away of kidney disease, and I was left as a single parent of a one-year old (who is now 49) in the summer of 1965.
I had attended the same Church, Newman Center (Catholic) at the University of Minnesota, as Frank Kroncke attended near the same time, but wasn’t involved in the protests or the activism – they were a luxury I couldn’t afford, time-wise, then. I really paid little attention. I guess I was neither against, nor for…. It is just as it was for me, then.
My family background is full of military veterans, including Uncle Frank Bernard, who died on the USS Arizona at Pearl Harbor, Dec. 7, 1941; and two brothers who are veterans of the Vietnam War and retired Air Force Officers. I was at the Vietnam Memorial the weekend it was dedicated in the fall of 1982: Vietnam Mem DC 1982001.
In 2008, Mr. Kroncke gave me an Award, as he gave an Award to the others in the Facebook album, recognizing my own quiet role in the struggle for Peace. It remains proudly displayed in my office, atop the model of the USS Arizona made for me by a work colleague in 1996.
We all have differing paths.
What is your story?