COMMENTS after NOTE 2
Yesterday, I spent a lot of time doing an unpleasant task. A project required going into a family room wall, which necessitated repainting of a small portion of the wall by our bookshelves, and I decided to repaint the entire wall behind the books.
Of course, this required taking out all of the books, first, to get at the wall. We have quite a few in our little library. The book shelf came with our 20 year old house, and isn’t fancy: just a frame with shelving. But it works, which is all that is necessary. And the project made sense, even though I knew what I was getting myself in for. 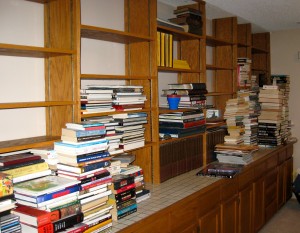 Handling the books was almost like rereading them. Both my wife and I have quite a number of books about Germany and World War II and the Holocaust (See Note 2 below) and they drew special attention this day.
Over the years we’ve revisited that insane time, roughly twenty-five years, in civilized Germany’s history. Both of us have ancestry there; I’ve visited German relatives whose Uncles or cousins were German draftees into WWII, farmers, who refused to talk about their experience afterward. Many elders served; some imprisoned; some died in that War.
I’m 73, and was thus alive all of America’s time in WWII. The two of us spent powerful time with about 40 other Christians and Jews in our party at Auschwitz-Birkenau and other horrendous places in 2000.
We’re reasonably close to having “been there, done that”, when it comes to WWII.
Just last week we visited our great German friend, Annelee, who was six when Hitler came to power in 1933, and was very nearly bombed out of existence twice near the end of WWII. She walked nearly 100 miles home, near starving, after the war was lost. She was then 18; she’ll be revisiting her Germany in about a month. Her Dad, who refused to join the Nazis, was drafted, and disappeared in Russia. They know he died in war, not sure where he was buried.
Just a week ago, at her home, I read a gripping book she had given me about the Allied bombing of Germany in the last years of the war. Nearly 600,000 Germans were killed under those bombs, I read. I wrote in part about that book, “Fire and Fury” by Randall Hansen, a couple of days ago. You can read the comments, with link here.
So, why this musing on this most pleasant Minnesota summer day, in 2013?
Ordinary Germans were like us, exactly, ordinary people who bought dreams and supported the politicians who they thought would produce on their promises, and believed the false promises (propaganda), until it was too late. More than once I’ve asked Annelee when she knew the War was lost. Always, she says 1943, when she was about 16. You can tell such things. By then it was too late, and the Nazis in charge just kept charging. Power has little long-term perspective. It “goes down with the ship” and those who think they’re powerless go first.
We are casually dealing with some similar governmental insanity in our own country at this point in time. No, our situation is not exactly the same as WWII era Germany. But we’re not all that much different.
My favorite blogger, Alan, wrote at length about it last evening. His post, here, is long but very well worth a read. It simply summarizes the efforts by what is called the “Tea Party” to leverage their rabble into permanent control of the U.S. government, while blaming others for the dysfunction.

You love the angry disorganized rabble that is the “Tea Party”? Be my guest. Maybe you fancy yourself to be a Tea Partier yourself.
I see Tea Party leaders (and those politicians who see them as their ‘base’) as pretty analogous to the rabble who leveraged discontent into control of the German government in the 1930s with the end results that are amply documented by many of the books in the bookshelf downstairs.
I’d suggest reading the long link, but most of all, think about the craziness of a small minority feeling it can use the government to bend all of us to its philosophy, especially since it is only the most loosely organized band of individualists who probably don’t agree with each other on issues, other than hating the opposition.
It may be tempting to not notice what is going on and enjoy a fine day, perhaps satisfied to blame “politicians” generally for the “mess in Washington”.
But the ball is in every one of our courts. It’s not “them”, it is us who must be, as Gandhi said, “We must be the change we wish to see in the world.”
NOTE 1: Annelee speaks publicly about her experiences in Nazi Germany 1933-45, and she always takes written questions (her hearing was badly damaged as a consequence of the bombing). More than once she’s referred to the lawyer who asked her to comment on how Obama compares to Hitler. The question astounded here.
“There is no comparison at all.”
NOTE 2:
I have noticed a great deal of tension around analogies to Nazi Germany UNLESS it applies to some sinister “other”. Perhaps the reason for this is that the Germans of pre-World War II were people very much like stereotypical “Americans” – white, European, educated, hard-working, “Christian”….
Rev. Martin Niemoeller, famous German dissident who survived the War likely because he was imprisoned, and too well known for the Nazis to execute, made many speeches after the war, which included some variation of the famous quote attributed to him:
First they came for the socialists,
and I didn’t speak out because I wasn’t a socialist.
Then they came for the trade unionists,
and I didn’t speak out because I wasn’t a trade unionist.
Then they came for the Jews,
and I didn’t speak out because I wasn’t a Jew.
Then they came for me,
and there was no one left to speak for me.
If you are interested in a longer academic analysis of what and when the quotation originated, you may wish to visit this web address, which is interesting and may or may not be definitive….
The essence of the quotation is, however, very true. People are easily manipulated. The impoverished Germans after WWI were easily led, in what turned out to be a destructive direction. So it can be for us as well.
There is plenty of “fool’s gold” being dispensed by American politicians these days, and especially the Tea Party version of disrupt and confuse is dangerous to our Democracy. Yes, he ball is in each of our courts.
COMMENTS:
From Bruce Aug. 16: As you’ve said many times, things are complicated. As I’ve said many times, Libertarian roots run deep into American history. I don’t think one should vilify the Tea Party or dismiss it out of hand. Some aspects of the Libertarian view cuts across the political spectrum.
Here is an interesting piece: Julian Assange admires Ron Paul, Rand Paul here.
Response from Dick Aug. 17: Interesting, odd, trio, Julian, Ron, Rand. They could have some interesting conversations if they lived together. Mr. Assange doesn’t seem to be a good example of libertarian ideals, essentially imprisoned as he is in the Ecuadorian Embassy in London. Leaving aside the reason he is isolated (except by internet), I’m not sure I’d like his idea of freedom.
Yes, it is “complicated”. I’ve become a big admirer of Garry Davis, who in 1948 renounced his U.S. Citizenship and became an unwelcome Citizen of the World since he had no papers identifying him as being without a country. His crime had nothing to do with revealing state secrets; he just was sick of war and killing people because they were within somebody’s political boundaries of the planet. His only crime was inciting freedom from war, as I understand him.
Yes, interesting and odd. It would be interesting to know how the Paul’s would view Assange.
https://thoughtstowardsabetterworld.org/wp-content/uploads/2022/04/thoughts-300x138-1.jpg 0 0 dickbernard https://thoughtstowardsabetterworld.org/wp-content/uploads/2022/04/thoughts-300x138-1.jpg dickbernard2013-08-15 20:49:252013-08-15 20:49:25#759 – Dick Bernard: A bookshelf reminder of Governmental Insanity, and its consequences for those not vigilant and engaged.
0 replies