This week I upgraded my anti-virus program to include more bells and whistles, including asking it to check up my back-up file – the separate “file cabinet” that keeps a digital “copy” of whatever comes into, or is generated by, my computer.
I had no idea what to expect. After two days, at about 4 a.m. Sunday morning, I took a photo of the screen at the moment the anti-virus said it had reached…well, here’s the photo (click to enlarge): 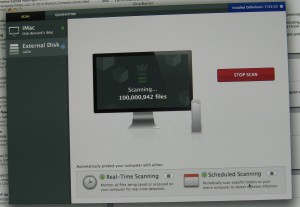 Last I looked, Sunday night, the number was at about 125,000,000 “files”, whatever that means. By this morning it had finished its work, finding two items to toss in the digital equivalent of jail: quarantine.
That little filing cabinet of mine sure holds a lot of stuff. It doesn’t seem to weigh any more than when it was empty….
We are in an age where we can communicate with everybody about everything, and save it all. Sometimes I wonder if we communicate at all.
If our entire system of cyber-communication failed (a possibility), we might find it was a good idea to have gotten to know our next door neighbors a little better.
Facebook says I have about 360 “friends”. These are almost all people I know in some context or other, all folks who I chose to “friend”, though as they all know, I very rarely communicate by that means. At the same time, at the infrequent times where I feel I have something important I want to share, it’s best to have that friend list available: some will notice. For certain purposes Facebook is a marvelous tool. I’ve seen it work, personally, once. But the “friend” list has to be there first before it can be effectively used. So, if somebody wants to “friend” me, fine by me…. But don’t expect a daily update.
I think it’s equally important to not abuse the list, otherwise nobody will look when I want them to at least pause when they see my name.
Then there’s Twitter.
Recently, somebody Twittered me, apparently interested in my “following” him. It said he had about 1200 followers, and he was following about 1120 others.
Twitter is another tool, but how in the world people can actually meaningfully communicate by that means is beyond me. Sure, you can call for revolution, but it’s not quite that simple. I guess I have five “followers”. They have never heard from me.
The Twitter rule is, I believe, no more than 144 characters, perhaps 25 words. Sure, you can link a blogpost to it, but if somebody won’t read 144 characters (about what is bold-faced in this sentence), why would they read something with hundreds of words?
And I blog a lot (usually 600-700 words). And obviously do a lot of e-mails too. In desperation, I tried YouTube a couple of times; I’m in Skype, but haven’t used it yet…maybe a to do. There’s other digital marvels I’ve heard of, but never gotten acquainted with.
And I write letters. Real letters, with stamps that require me to go to the post office. This is sometimes, a good social opportunity, even if somebody is grousing about lack of instant service, while someone else ahead is consuming seemingly endless time with a clerk….
Cathy noted something on the news a couple of nights ago that powerful people in the U.S. Congress continue their intention of starving the Post Office out of existence, even though that same Post Office is specifically required by the U.S. Constitution. Perhaps starvation is the wrong word; penalizing it out of existence might be better, as pointed out in deadly accurate ads by the Postal Workers Union, as recently as this morning.
And on it goes.
This morning, I took a picture of the little device still whirring behind this screen, and noted my long unused Zip Code book.
I picked the book up, noted it had been printed in 1988, and the first class stamp, then, was 25 cents (46 cents today.)
At any rate, as I have said for years, we do have more ways to communicate less, and maybe we ought to dust off the person-to-person ways that build relationships close to home. 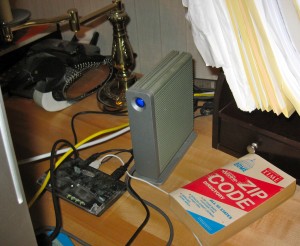