MORE: See followup post July 24, 2013, here.
For a long well-written summary of “Detroit” and (alternatively) “Pittsburgh”, check this. (I’ve been to Detroit several times between the 1960s and 1987; to Pittsburgh several times from the 1960s to 2011.)
In yesterday’s e-mails came a long and hideous recitation of the problems in “Detroit”. It was what I expected – the guy who forwarded it, forwards similar stuff frequently: a dozen hideous photos of destroyed places in Detroit, surrounded by an endless recitation of words like “corruption”; and helpful words like “illegals”, “Muslims”, “Mexicans”, “Sharia Law”…. “Detroit” is one scary place.
The preface to this “forward” apparently came from two, perhaps three, different people, exactly as stated:
“Maybe you’ve seen this one before. Pretty scary stuff…….L”;
“This may be construed as racism which is not the intent.The devastation of a once vibrant city in the US today is appalling….DETROIT IS THE FUTURE OF U.S. AND CANADA”
“After 5 Democratic Black mayors in a row [three are in jail and the other too have been indited] all for theft, fraud,lying and other meriad [sic] charges, what result would be expected?
The city is now in bankruptcy and now run by a bankruptcy chief appointed by the Michigan State Governor and the debtors will get 10 cents on the dollar.—D”
All the invective is to be expected, and typical of the venom sent around, e-mail box to e-mail box.
Granted, “Detroit” is a disaster, but far more complex than conveyed by racist invective. It is a very large example of a failure of far more than just a city or its citizens, as pointed out very well by Michelle in a comment at the end of this post.
As it happens, the guy who sent this to me graduated from the same tiny high school in the same tiny North Dakota town in the same year I did. We were classmates. In fact, both of us were in the same town a short time ago for a 100th anniversary of the local school, which has been closed for eight years, likely never to open again.
It was a nostalgic couple of days. There is an unexpected opportunity, now, to compare our little town with “Detroit”.
Our North Dakota town is typical of hamlets everywhere. Put together, they would equal or exceed “Detroit” of far-right legend: vacant buildings, etc., etc. There may not be the crime, but there is a logical reason for that: what self-respecting crook would waste their time in these tiny places? Maybe a meth lab in some abandoned country building, or such.
But these thousands of unfortunate little places share a great deal in common with Detroit. They are casualties of our “free market” system and their survival depends on the ever fewer people who live within their bounds, many of whom survive on hated things like Social Security and Medicare, and are in no way equipped to rehabilitate a disaster beyond their control.
The larger community, called State or Nation, has for all intents and purposes deserted them.
In the little town where my classmate and I were on July 6, there always was a single block Main Street with a few outlier businesses. When I returned there 55 years ago, there were, best as I recall, 13 businesses on that Main Street. Today there are two – at least I think there are two, there may be only one. (There were a few businesses on side streets years ago; all but one has disappeared today.)
The rest of the town is similar. The empty school, left to its own devices, as it likely will be since it is expensive to heat, even minimally, will just continue to deteriorate and ultimately become uninhabitable – just like many Detroit buildings.
While in my little town, I did an informal count, and it appeared that only a bit more than half of the buildings I knew as a youngster remained 55 years later.
There is no way up for this little town for which I, for one, have fond memories. And I think it’s a typical small North Dakota town.
It is really no different than Detroit, except that it is small and anonymous….
As for “Detroit”, it has become a stock hate word for overtly racist commentary like the forward I received.
Read Michelle’s comments, below the photo, and give this some thought.
We all, in one way or another, have helped create Detroit, and my little town….
(click to enlarge – this photo is from another little town in which I once lived.) 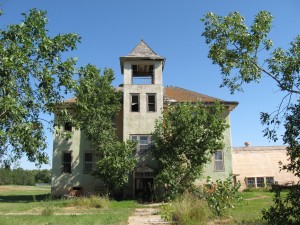 Comment from Michelle, July 23, 2013:
I lived and worked in the heart of African American communities in St. Louis during the late 80’s-early 90’s. And like a good liberal, white Minnesotan, tried to make positive changes in an urban city that, while not as bad as Detroit, had and still has it’s share of challenges – it’s still the murder capital of the midwest. Like St. Louis, Detroit is surrounded by super-wealthy suburbs that exist in isolation with no “metropolitan planning commission” like we have here in MN. Again, I would say that here in MN, while people sometimes feel the Metro Planning Commission seems meddlesome, our good government nature here has allowed our communities to thrive by helping to balance resources regionally vs. let cities battle it out on their own.
My perspective is this – like what I experienced in St. Louis, everyone is to blame for Detroit – This is not some “bad Republican corporate white man problem.”
The State of Michigan should have put a regional planning and development commission together a long, long time ago.
The business community should have diversified from automobile dominance many, many years ago.
The unions should have worked harder to disassociate themselves from the “mob” and other illegal activities that still plague the biggest unions.
African American communities should have worked harder to find and groom strong, moral leaders who when they got their chance at running Detroit, which many, many did, could have been more effective in representing the true needs of the community.
And “liberals” like us on this email blog… could and should remember that business is not all evil – we need to champion strong companies to fuel our inner cities and speak out against corruption in the unions when we see it as well.
On issues this big – the complete collapse of a major American city – we all share blame and it’s a wake-up call for the future.
https://thoughtstowardsabetterworld.org/wp-content/uploads/2022/04/thoughts-300x138-1.jpg 0 0 dickbernard https://thoughtstowardsabetterworld.org/wp-content/uploads/2022/04/thoughts-300x138-1.jpg dickbernard2013-07-23 21:20:522013-07-23 21:20:52#750 – Dick Bernard: "Detroit"
0 replies