Yesterday I asked Cathy, “when’s the kid back?”
She suggested, quite reasonably, that I might look at the schedule on the refrigerator door. So I did. “JUNE 18 (TUESDAY) ARRIVE BACK HOME…(by about 10:00 – 11:00 AM)” They were back, just after 11, as promised.
“The Kid”, as I like to call him, is Ryan, freshly minted 8th grade graduate, one of our nine grandkids, 14 in a couple of weeks.
June 12-18 he and three busloads of kids did the Washington DC routine. Their schedule can be viewed here: Ryan’s DC Trip June 2013001 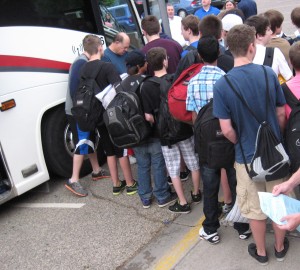 Best as I can see, I’ve been to all of the attractions Ryan and his crew saw, some of them several times, though not for several years.
Washington D.C., as revoltingly messy as it is, politically, is a fascinating and even inspirational place to visit. It works. (It would be nice to see Congress do the same, though I won’t hold my breath.)
And the organized groups which visit D.C. – a constant there – are part of the inspiration.
We haven’t ‘debriefed’ Ryan as yet, but I am sure he’ll have memories that last the rest of his life, as will his colleague cousins, Spencer and Ted, who were in the same DC a few short months ago.
I marvel at the organization of these tours. They are, of course, a formula event. Like a well-oiled machine, each bus arrives at its destination, disgorges its cargo of kids, who generally are orderly citizens going through the museums or whatever it is that is on their schedule for the moment.
(Following them east on the early part of their trip was a threatened superstorm with Washington DC in the bullseye. I asked Ryan only if they’d been affected, and apparently not. They were indoors, as scheduled, at the Arlington Cemetery during the time of the heavy rain in DC.)
The leader who was strawboss for this tour was a retired school administrator who said this was his 51st trip with kids to Washington.
He looked and sounded a bit like a retired Marine Drill Sergeant, no nonsense. A perfect fit for the group!
I taught 8th graders for nine years back in the 1960s, and once in awhile took them on field trips, so I know the nature of the beast – they don’t change that much over the generations. Likely there were one or two attempts at cute stunts, but likely nothing surprised the directors.
Teachers know the drill with kids. It is a key survival skill. It is the rare civilian that could manage large numbers of youngsters as teachers routinely do.
The only calls home from our guy were brief and good ones, one to his Dad on Father’s Day where he was obviously around his friends and apparently mumbled a clear (to his Dad) but imperceptible (to his friends) “I love you”.
It was good for a chuckle.
Next year it’s high school – in his town, high school is grades 9-12 – and back to the bottom of the heap his class goes, and a new time of adjustment as the teen years rage on.
All one can do is hope that the trip through high school is without serious mishaps.
We think Ryan has made a decent trip so far, with a minimum of mishaps, and one can hope that the choice of friends, activities and the like lead to growth and a minimum of scrapes of the assortment that all parents are aware of with their kids (and probably experienced themselves when they were at THAT age.)
https://thoughtstowardsabetterworld.org/wp-content/uploads/2022/04/thoughts-300x138-1.jpg 0 0 dickbernard https://thoughtstowardsabetterworld.org/wp-content/uploads/2022/04/thoughts-300x138-1.jpg dickbernard2013-06-18 13:28:052013-06-18 13:28:05#734 – Dick Bernard: The Kid Returns from DC
0 replies