THE TORNADO IN OKLAHOMA: While preparing this blogpost, word came of the tragic tornado most affecting Moore, OK. It caused me to recall another tornado which for some reason I’ve always remembered, the Fargo Tornado June 20, 1957003. See photo at the end of this post. In times like these thoughts always go to a heightened sense of community, and the importance of the public infrastructure and planning for the long term possibilities. Sometimes we do this well; often we do this poorly.
*
Lawrence Welk remembered
August 10, 1994, I was at the ancestral farm near LaMoure ND, trying to do a small part to help my Uncle Vince and Aunt Edithe during harvest time.
This particular day, a Wednesday, for some unremembered reason, the suggestion was made that we make the 110 mile drive west on Highway 13 to see the small farm near Strasburg where Lawrence Welk grew up.
I took a photo of Vince and Edithe, my Mom’s brother and sister, that day:
(click to enlarge) 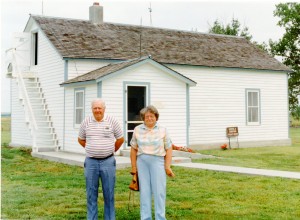 Vince and Edithe at the Lawrence Welk boyhood home near Strasburg ND August 10, 1994.

For anyone over a certain age, the Lawrence Welk story doesn’t need repeating; and his long popular show lives on, larger than life, on TV week after week. He is a part of Americana.
He was the first recipient of the North Dakota Roughrider Award in 1961.
Lawrence was of the group called German-Russians who make up much of the population of South Central North Dakota. He and his brothers lived in the upstairs and unheated attic of the tiny farmhouse, and Welk practiced his music skills in the barn, entertaining the cows and the chickens when not doing the hard work required of farmers.
Lawrence Welk came unexpectedly back into my life last Thursday, on a visit to my still-surviving Uncle and Aunt, now living in Assisted Living and Nursing Home respectively in LaMoure; now 88 and 92.
We were about finished with “dinner” (the noon meal will always be “dinner” out on the prairie!) and in walked a lady and her husband who had come to do a show for the residents that very afternoon.
It was then I met Loretta (Welk) Jung and her husband Oliver. 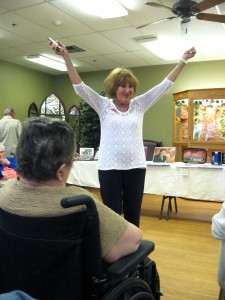 Loretta, a retired First Grade teacher in Jamestown, is related to Lawrence: their Dads were first cousins, living in nearby communities. Loretta knew her much older cousin Lawrence as a person and at some point in time decided to carry on the Welk tradition by doing a road show at Nursing Homes and the like on her cousin, Lawrence Welk.
I can attest, she gave a fascinating program that enthralled the attentive audience at St. Rose Care Center last Thursday. If you look carefully, you can see Uncle Vince and Aunt Edith seated in the second row. 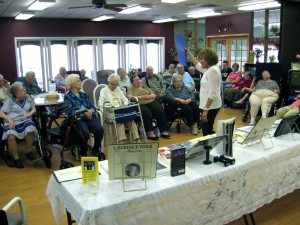 The following day I went out to the farm with Vince to help with the mundane things that needed doing.
Mowing the grass beside the house, I found a verdant reminder of Edith’s love of flowers…she hasn’t been out to the farm for a long while, so these tulips had just decided to take things into their own hands and just get about the business of blooming. 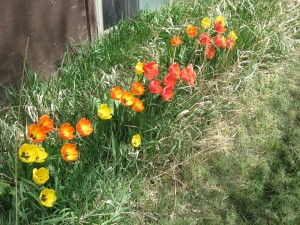 We picked a bunch of the flowers and delivered them to Edith in her room at the Care Center.
The next day we picked some more, and brought them in as a more-or-less floral arrangement for the dining room. 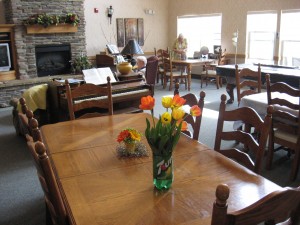 And so the seasons go on.
In earth terms, it is spring, and the rhubard (“pie plant” to Edith) begins to grow as it always does in the patch in the garden; and the apple trees by the house begin leafing out for another season – maybe there’ll be lots of apples by fall, maybe few. We shall see. 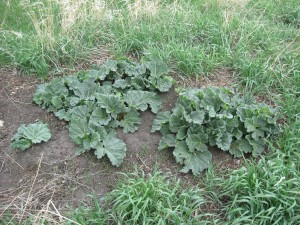 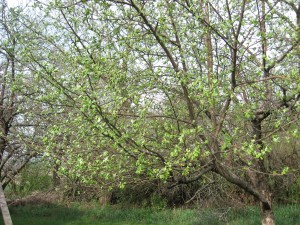 For the rest of us, we’re in our own “season” in our lives.
May this season be a good one for you.
Cherish each day. Here’s a ten minute video on gratitude and living each day that helps put this into focus.
Dr. Elwyn Robinson on Lawrence Welk in History of North Dakota, c 1966, page 555: “While he was an individual, not a type, Lawrence Welk, the orchestra leader, gave all Americans an image of the North Dakota character. Of Alsatian stock, he grew up on a far near Strasburg, North Dakota, learned the accordion from his father, and in the 1920s began to play at churches, country dances, and then on the radio station at Yankton. After the Second World War, he and his orchestra, playing his famous “Champagne Music,” attained success with long engagements at hotels, many recordings, and a weekly television show. The honest, friendly, and unsophisticated Welk and his wholesome show gave millions of viewers some understanding of North Dakotans. During his rise he had met ridicule and contempt, and so courage and energy played a part in his success. His loyalty to North Dakota was obvious to those who watched his program.”
Thursday, June 20, 1957, Fargo ND 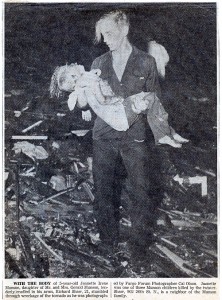