It has been two weeks since my last post. In my world, this means either a computer problem or, in this case, that I was away from computer for the last two weeks. This is my one small act of defiance to the internet: when I’m away from home, I’m away from computer. No smartphone, no laptop….
Freedom, blessed freedom (though sometimes it would have been nice to tune in….)!
My time away was spent wandering around Florida, from being with grandkids, to visiting relatives, to doing a workshop, to visiting with friends. I was from west coast to east coast and within a few miles of Orlando; and Clearwater’s Honeymoon Island; to near Ft. Lauderdale.
I drove across the interior of Florida – away from freeways (and, it almost seemed) away from motels.
Thank goodness for Okeechobee! 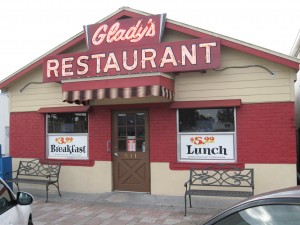 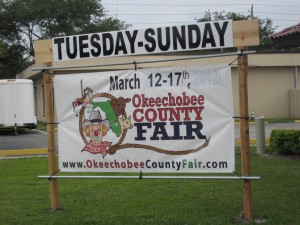 I was largely separated from newspapers, radio and television, and didn’t miss it. I spent several hours on a boat on the Gulf Coast side of the state; and made several visits to Kennedy Space Center/Merritt Island Wildlife Refuge and even the intriguing town of Cape Canaveral…and even saw a satellite launch on March 19 (“Atlas V carries a missile-warning craft into orbit”).
There’s a great deal to muse about, but my first thoughts zero in on organizing around most anything; about each one, reaching two (or more, but starting with a reasonable goal of two new people).
“Each one reach two” is a long-brewing thought I’ve had. In Florida, it resurfaced in a elementary school music program near the shore of Indian River across from Merritt Island, and within a few miles of Kennedy Space Center; and a community peace initiative at Tarpon Springs (the famous Greek Sponge gathering town); and elsewhere as well. But mostly “Each One Reach Two” came to life at Fairglen Elementary….
(click to enlarge) 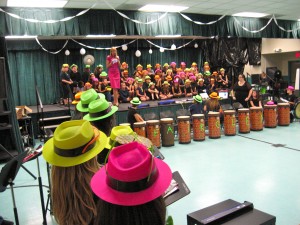 There was no reason for me to even know there was a concert at this school on the evening of March 20.
Neither was there a reason for my hosts to be there. They had other plans, and had no children in the school.
Enter one of the girls you can see in the front row of the chorus (above).
She is their neighbor, and she mentioned the concert to them once, and then specifically invited them to attend again.
There was no alternative decision for them to make!
And what a delightful change in plans it was. It was only thirty minutes of concert, with the usual gathering hubbub at such events, sitting at lunchroom tables or, as we were, in the standing room only category. 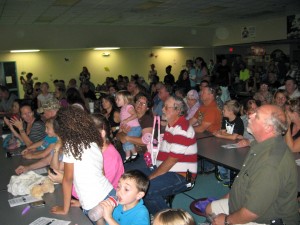 Part of audience at Fairglen Elementary

This young lady sold us on choosing her option.
By doing some personal salespersonship – asking for our attendance – she had reached not only two others, but a third person, me.
And we were all the better for it.
So, if it was easy for the young person to ask, why is it so hard for we adults to do the same, about issues important to us?
Yes, I know, there are endless excuses (I have plenty myself).
But I’m hoping to begin a Facebook group, “Each One, Reach Two”, and I invite you to like it, to join. (It’s not there yet; I have to figure it out.)
Facebook page or no, there’s no admission charge to “Each One Reach Two”; no issue of mine you need to take on; nothing other than your informal commitment to do something about something you care about, perhaps taking a little risk, outside your normal boundaries.
That’s what I re-learned in Florida from that young person in the front row at the concert.
Related posts:
The Ask: A brief lesson on selling an idea.
Uncomfortable Essays: Consider reading #1 and #2, pages 3-7.
A Million Copies (note the Margaret Mead and Gandhi quotes at top and bottom of the page.) A tribute to two ordinary persons who are continuing to make a difference. 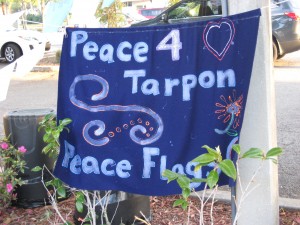 Community Peace Initiative relating to such topics as anti-bullying in Tarpon Springs, Florida. I was drawn in by a garden full of handmade Peace Flags in a community pocket-park.