Note comments following this posting.
Yesterday afternoon, August 11, enroute home from a meeting, I listened to a portion of a public radio talk show about the death of Eunice Kennedy Shriver, she of the Kennedy family, and founder of the International Special Olympics.   http://www.eunicekennedyshriver.org/
An hour after I got home, we headed out to suburban Lakeville to see the final festivities of the season for my daughter and the Rave softball team.  Heather is, as described on the Shriver tribute, “intellectually disabled”, and the Rave is part of a league of similarly situated adults in suburban Minneapolis.  The three hours in Lakeville was a delightful end to a long and tiring day.  The Rave lost, but they won fourth place in the final game.  Heather had one at bat and struck out (unusual for her), but it was exciting, nonetheless, to watch these special adults and their extra-special coaches have fun together.  (Three photos from the game at end of this post.)
The juxtaposition, on the same day, of Eunice Shriver’s death and Heather’s final game of the season, with all the trappings: the Star Spangled Banner, a fried chicken dinner, and genuine 4th place ribbons for everyone on the team, presented personally to each of the players, on the field! , made for a nostalgia filled day for me.
Eighteen years ago, in July, 1991, the International Special Olympics came to Minneapolis-St. Paul, and I made the very lucky decision to take a few days of my vacation and volunteer with whatever for a state delegation.  (There were delegations from around the world at this event.)
It was a hugely inspiring few days, going here and there with the team, running errands, generally just getting next to the participants and the coaches as they were involved in their activities.
There were many high points in those few days, but nothing higher than the closing ceremony at the Minneapolis Metrodome.  I was among the sea of folks, partcipants, coaches and volunteers, who waited for what seemed like hours for the opportunity to walk into the Metrodome to what was a tumultuous welcome.  Even as I write, 18 years later, I get teary-eyed remembering that extraordinary evening to honor not only the competitors, but the entire “intellectually disabled” community worldwide.   The below photo I took that 1991 evening catches the mood for me.  I am sure, that night, that Mrs. Shriver personally and powerfully declared her signature phrase, “you have earned it“, to each and everyone surrounding me on the field, and to those in the stands and in the greater world as well.  It was awesome. 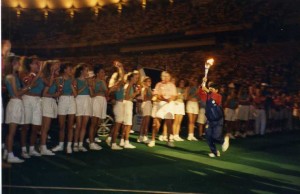 It used to be that persons like Heather would be relegated to places like the “School for the Feeble Minded” we used to see when we visited our grandparents in North Dakota years ago.  Until yesterday, I had not heard the term “intellectually disabled” attached to this very special group of citizens.
It has not been an easy transition from the good old days to today, but legions of people in very small and very large ways have, indeed, effected change in how special persons like Heather are treated by society.  They – the special people and their helpers – are all around us.  In Heather’s case, special recognition goes to her sisters Joni and Lauri, and her Mom, Diane.  “Thank you” does not suffice, but its the best I can do.
At the “Field of Dreams”, Aronson Park in Lakeville MN, I felt the same thrill, last night, that I felt at the Metrodome eighteen years ago.
I am grateful to Eunice Kennedy Shriver, but most especially grateful to the very special people, parents, coaches, staff, who make life a whole lot better for people like Heather, and bring lots of personal satisfaction to people like me.
Thanks, especially, Coach Pricco! 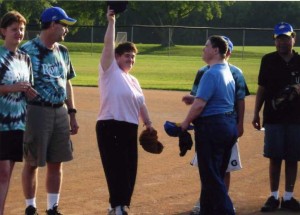 Heather being introduced to the spectators at the game 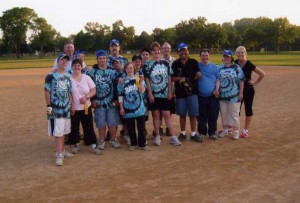 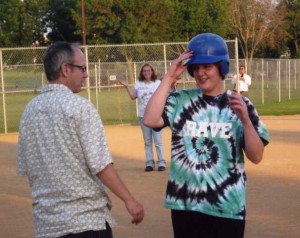 Comment on a phrase used in this post from a reader:
Just a personal pet peeve:
Not to discount the wonderful work of Shriver, but I really dislike the term “intellectually disabled.”  In fact, I very much detest the word “disabled” as applied to people.  It defines us by what we can’t do.  It’s negative.  I’d much prefer the term “differently abled” as cumbersome as it is.
We are all in a sense “disabled” in some ways, whether by age or ability or aptitude.  Setting people apart by what they cannot do does not bring all the various wonderful people, like Heather, into the mainstream to be appreciated for who they are and for what they can do and what they can be in our lives.
Words are powerful and convey messages, intended or not.
On a more positive note, it’s wonderful that Heather can have such a wonderful time with others who can watch and appreciate them.  Certainly not like “the old days.”  Carol Ashley
Brief Response:  I simply repeated the words I heard several times on the MPR program.  It was an interesting exercise to search the internet for the words “intellectually disabled”, and see the points of view there.  I agree, words are very important.  There are differing interpretations of their significance, I suppose.  Dick Bernard
https://thoughtstowardsabetterworld.org/wp-content/uploads/2022/04/thoughts-300x138-1.jpg 0 0 dickbernard https://thoughtstowardsabetterworld.org/wp-content/uploads/2022/04/thoughts-300x138-1.jpg dickbernard2009-08-12 04:56:262009-08-12 04:56:26#69 – Dick Bernard: Eunice Kennedy Shriver, Heather, and "…the land of the free, and the home of the" Rave!
1 reply