Now and then we go to watch 8th grader Ryan and his B-squad teammates play basketball. We’ve done this since he started in Woodbury Athletic Association (WAA) a few years ago.
Odds are that we haven’t watched a future State All-Star in any of these years. These are kids who like to play basketball, and each year you can see their skills develop: dribbling, passing, shooting, teamwork….
It’s fun.
Yesterday afternoon, Ryan’s team was playing Oak-Land, on their home court at Woodbury Middle School.
It was a fast moving game, and interesting (which, to me, means “close”). Towards the end, I thought Oak-Land was pulling away – as I recall they were up by 7 – but the Woodbury team tied the score, and the game went into overtime.
(click to enlarge photos) 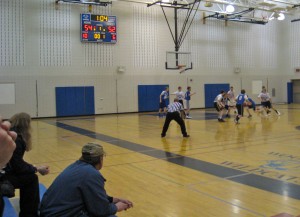 Then a second overtime; then a third, a fourth, a fifth….
Overtimes started out at three minutes, then were reduced to two minutes, then came the fifth overtime, only a minute in duration.
Pressure was on. Perhaps there were 50 or so of we spectators there, and we became more attentive and animated. Such happens in close contests.
Then came the final free throw.
Of course, there’s no announcer at these games, and no high tech scoreboard technology saying who’s shooting, so it was just a Woodbury Middle School kid standing on the free throw line at the east end of the court, shooting two.
His first missed.
Then the second. Tension was on. I was trying to take a snapshot so could only listen to the results, and I knew by the cheering that the ball had found its target! 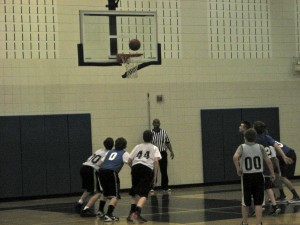 I doubt anybody from either side left the gym unhappy after that game. It was good, healthy competition and everybody played their best.
Thanks to the kids, the coaches, the ref, the fans, the public schools.
The kids congratulated each other, and off we all went.
It was good. 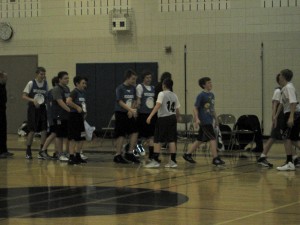