Jackie Stevenson passed on Sunday evening. This morning’s Minneapolis Star Tribune obituary carried a summary of her political life, and accolades about her. They speak for themselves.
Even among other Sheroes, Jackie seems to have been a cut above.
Somewhere in my photo files I probably have a better photo of Jackie than the below. On the other hand, Jackie made her difference in groups. This photo of Jackie with the DFL Senior Caucus Board in September 22, 2011, is as recent a photo as I have, and is evocative of her – she was always there to work and contribute.
(click to enlarge) 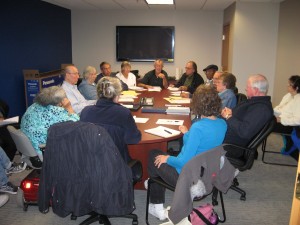 I was a colleague on the DFL Senior Caucus Board with Jackie. I didn’t know her for very long, and I didn’t know her well, but she was one of those persons who, if they talked, you listened. She radiated wisdom.
She and others of her feminist activist generation live on in many ways.
The legacy she and her colleagues in the struggle for women’s rights leave is a very rich legacy.
Just for a single example, in my own Senate District, 5 of the 6 candidates vying for three offices this November will be women; one of my two U.S. Senators is a woman; present U.S. Congresswoman is…a woman; and the person most likely to replace her in our new Congressional District is a woman.
And on and on and on.
Who’d ever thunk that would have ever happened!?
Those who worked more closely with her, for many years, will have lots to say in coming days.
As for me, farewell, Jackie.
You done great!
Here’s an old postcard to my grandparents farm circa 1910 (10 years before suffrage) that says it all, pretty well! I think Jackie would chuckle at it, though it wasn’t much of a chuckling matter back then. 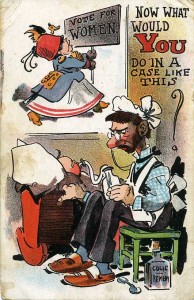