(#4 is here.)
Tuesday I was at the Capitol to deliver personal letters in opposition to Voter Suppression as embodied in HF 2738. Enroute there I stopped at the office of the Secretary of State and picked up a Voter Registration form, which is here: MN Voter Registration001
Print out this form, get to know it, well, and start to exercise it with people you know who tend to be slow to getting around to these kinds of things. This is about as simple a process as there is. But it is a process.
There is no reason for the constitutional amendments to pass, IF people get out to vote and pay reasonably close attention to the implications of the issues. The amendments do not go into effect until after they are adopted. And there is still time to urge your legislators to vote no.
Tuesday I happened to be in the Capitol as an AFSCME rally was concluding. There was a sea of public workers, apparently at a lobby day. As I entered the Capitol the loudest chants I’ve ever heard there were pealing through the Capitol. I thought to myself, this is what we, the people, look like. This was a demonstration worthy of notice.
On the way out, an apparent spokesperson for AFSCME was being interviewed. Congratulations to AFSCME and to her, specifically. 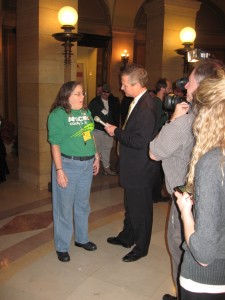 At the Minnesota Capitol rotunda March 27, 2012

Back to the proposed Voter Suppression Amendment to the MN Constitution:
Here is a response concerning #4:
Spencer Jay Reppe: The most misleading promotion of the amendment always speaks to the showing of a photo ID. Though this poses problems for a great many registered voters, the real travesty of this amendment is the clause “substantially equivalent eligibility verification”. This simple clause places 500,000-600,000 Election Day Registrations into jeopardy, which I feel is the real target of the amendment. They will have to go into a pool of “Provisional Ballots” that will need to be verified over a period of weeks or months after the election. Municipalities are not staffed to handle such a wall of paper and have neither the resources nor the budget to manage the task. Furthermore, it places the election judges, who for the most part are volunteer citizens who simply want to help in the election process, into being “polling policemen”. It is a role many will not want to take on. This amendment will not expand voting rights to one single voter, but rather, it will take voting rights away for thousands of registered voters, as well as thousands of same-day registrants. The selling of this amendment is dishonest, a sham and needs to be challenged to the nth degree. [Spencer indicates that Lori Sturdevant’s column in the Sunday Minneapolis Star Tribune is especially good on this issue. It is here.]
Dick: Again, no proposed amendments to the Constitution will pass if people get out to vote, and say they don’t want the amendments to go into effect. But the need is to get out and vote in November.
In order to give some personal context to the potential effect of this amendment, I decided to review my own election history, going back 50 years. This is a useful exercise for anyone who thinks that amendments like this make no difference to them, personally:
The issue in this bill is much more disenfranchisement on Election Day, than on Voter ID. The intent is to decrease turnout of people like us by making voting less convenient. The issue is not crooks – never has been. It is voter suppression.
I’ve been eligible to vote for over 50 years – I turned 21 in 1961, so I wasn’t eligible to vote in 1960. Since then I’ve been an almost ‘religious’ voter. I very rarely miss an election, even a mid-term one.
A few days ago I decided to relive those 25 biennial election days, just to get an idea of elections I participated in, or might have missed. It’s an exercise you might do for yourself. You might find that the odds favor your missing an election even if you intended to participate.
My first election I was in the Army, and most likely didn’t even think of voting for anybody. I was in Colorado and I was a resident of North Dakota. The Cuban Missile Crisis had happened a couple of weeks prior, and we were otherwise occupied….
In those 25 election years, I did a little chart:
1. I lived in ten different towns over those years
2. I lived in three states
3. At the time of four of those elections, I’d lived in the town for three months or less.
4. In five of the elections I was a relatively new resident, one to two years.
We’ve lived here in Woodbury since 2000, the longest I’ve lived in a single place in my entire life. I would guess that our cohort is similarly well-settled, which makes it less likely that we concern ourselves with the issues affecting college kids, the poor, etc.
We’re the folks who’ll have to step up to the plate in educating others about this issue.
I challenge you to make your own voting history chart. I’ll bet you find it interesting.
https://thoughtstowardsabetterworld.org/wp-content/uploads/2022/04/thoughts-300x138-1.jpg 0 0 dickbernard https://thoughtstowardsabetterworld.org/wp-content/uploads/2022/04/thoughts-300x138-1.jpg dickbernard2012-03-29 04:35:342012-03-29 04:35:34#545 – Dick Bernard: Election 2012 #6. Continuing #4 Voter Suppression Amendment
0 replies