We went to a most uplifting Catholic Mass today. 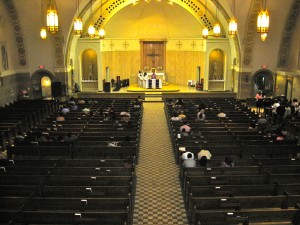 If one went by this photo from the choir loft at the beautiful Church of St. Boniface on Sunday, the Church was nearly empty. It is, after all a large church. (click to enlarge the photos)
But if you could add sound, and be sitting up somewhere closer to the front, your ‘picture’ of this place would be much different.
St. Boniface was very much alive on Sunday noon, as I am sure it is alive every Sunday noon, for the weekly Mass in the French language.
By my count, there were 62 of us in the Congregation, all but five of us Africans whose native land is one or another of the west African countries whose formal language is French. Fr. Jules Omalanga, a most engaging Pastor, is a native of Kinshasa Congo,and Pastor of the Church, and every week at noon has a liturgy for a lively community of Francophones.
Doubtless, a person wandering in off the street would probably be a bit confused to see African people speaking French in this church! It reminded me of a similar experience in 1971 when we took a weekend trip from Oregon to Vancouver British Columbia and stopped for Mass at the first Catholic Church we saw. The church was full of Vietnamese, all speaking French…. Another learning.
(I am French-Canadian through my father, but I was never exposed to the French language as a child, and never was in a place where I could take French in school years. So while I can ‘get the drift’, my participation is more or less following along with the rest of the group. I know when the pastor makes a good humored comment by the laughter, and follow along…. Of course, my computer does not speak French either, so I cannot put that peculiar little squiggle under the “c” in “Francais”, but that is only a small indignity to the language.)
To the right in the photo was a lively and good choir of parishioners. These were adults, men and women, not afraid to sing! 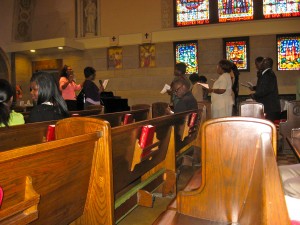 St. Boniface is a very old parish, dating back to 1858, the year Minnesota became a state. Its history is here.
Like all parishes of any denomination, the years for ethnic parishes have passed on, and diminishing population have led to many church closings. St. Boniface retains some real and readily apparent vibrancy. It is a beautiful structure, and its weekly African visitors bring a particular richness to its sanctuary. (Its address is 679 NE 2nd Street in near northeast Minneapolis.)
We were at this particular Mass at the invitation of Fr. Jules and Dr. Virgil Benoit, who is planning a major Francophone event in Minneapolis September 28 (at Our Lady of Lourdes and DeLaSalle High School – stay tuned for details. Announcements will be here and elsewhere. It promises to be a stellar event, involving people such as the Africans in attendance on Sunday; locals of French-Canadian ancestry; teachers of the French language; people that love the French language, etc., etc., etc.
Mass – Messe – concluded, Fr. Omalanga walked down the center aisle, holding hands with what seemed like a dozen adoring kids. I thought back to a similar experience at Ste Clare church in Port-au-Prince Haiti, when Father Gerard Jean-Juste had a similar devoted following from his Haitian congregation. One could feel the love.
After Mass Dr. Benoit and two of his African colleagues, both doctoral students at the University of North Dakota, spoke with those interested about the September program.
It was a very good day, indeed. 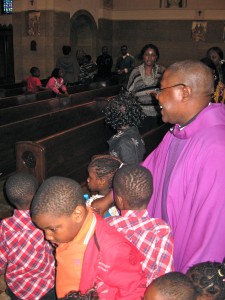 Fr. Omalanga and children process out after Mass 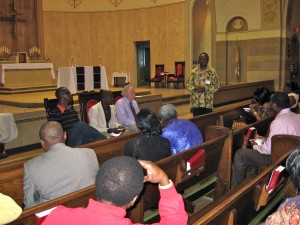 In front, from left, Moussa Nombre, Amoussa Koriko and Virgil Benoit are introduced to persons interested in the September 28-29 event. 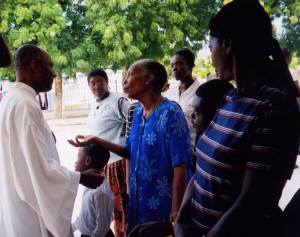