More important information on this issue in MN: Our Voices Count MN, and League of Women Voters of MN.
Election 2012 #1 is here.
Through the day, today, from a number of sources, I heard a request to show up at the state Capitol on the Voter ID Constitutional Amendment proposal, possibly reaching a vote on the House floor this evening. (The Senate vote on this matter will follow soon. You still have an opportunity to take a position on this matter.)
We decided to make an appearance today. I infrequently go to these events, but this issue is a particularly compelling one.
There is a deliberate effort being made to disenfranchise certain people in Minnesota and thus suppress their vote. I have learned a lot about this issue – likely more than most people – and I am very concerned.
I wrote a note at the Capitol to be delivered to my local Representative on the floor of the House essentially saying that my wife and I had plenty of ID and a long-time address in our town. The issue is not about us.
The issue is, however, about making it more difficult for certain people to exercise their franchise, and that bothers me, a lot.
There were relatively few at the Capitol this afternoon, but I gathered that massive numbers was not the objective. There were no speakers – at least not while we were there. There was no vocal demonstration. The police and security had nothing to worry about.
I had a brief conversation with a couple of individuals representing organizations: 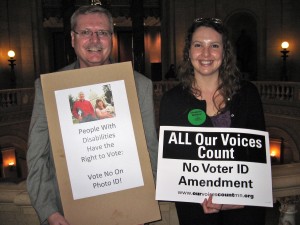 Both Steve Larson (Arc of Minnesota) and Michelle Gray of Brain Injury Association of MN well represented their respective organizations advocacy for individuals who in one way or another need assistance, including when it comes time to defend their constitutional rights, such as the right to vote.
An action oriented handout was distributed to us by the Minnesota Council of Nonprofits. It is here: Facts on Voter ID001
There’s still time to contact your Senator.
Do it now. 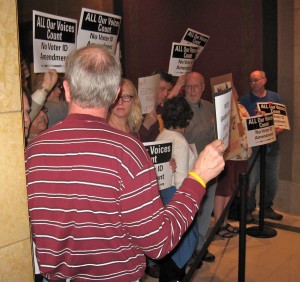 March 20, 2012 outside the House Chambers at the State Capitol