COMMENTS AT THE END OF THIS POST, as well as a photo of the Busch farm in the summer of 1907, soon after the sod-busting of 1905:
Previous Heritage postings: here, here and here.
“One had to be impressed with the silence.
All you could hear was the jingle and creaking of the harness and the plop, plop, plop of the horses hooves, along with the silent plop of the sod being upturned.”
Melvin Berning
October, 2011
My mother’s cousin, Melvin Berning, saw the photos of the old walking plows I found at the ND farm (you can view them here), and it inspired the drawing below, and a short story of his memories behind the plow in the 1930s and 1940s. (click on drawing and photo to enlarge). 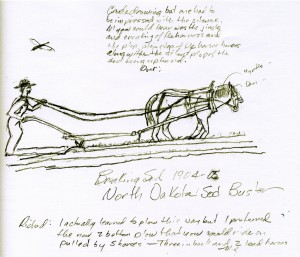 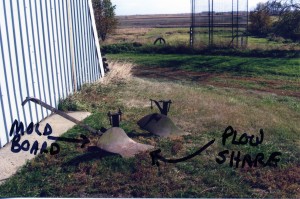 Here, with great thanks to Mel, is his story, received October 27, 2011:
“I actually learned to plow [with the walking plow] but I preferred the new 2-bottom plow that you could ride on, pulled by 5 horses, three in back and two lead horses.
I think you have two kinds of plows [in the photo].
Notice the mold board and plow shares. [The plowshare] was used for plowing after the sod was broken up. The [other] one seems to have a moldboard that is less curved and longer and I could not distinguish the plow share [see note below]. The different shape allowed the sod to lay over better. I did see some sod broken up and if the sod didn’t turn completely upside down, it had the tendency to go right back to its original position, thus the longer moldboard. I can’t really tell from the pictures.
The plow share was detachable sharpened every year at a blacksmith shop. Uncle Ferdie [my Grandpa] may have done that himself in his shop. I know we would shrink wagon wheel steel rims over there. The wagon wheel rims would be pounded [?] out during during their travels.
I actually plowed the fields with a five horse team – three in back and a lead team of two horses. It was my job to harness, hook up the teams to the plow and ride it. We worked from 8:00 till noon approximately 3 miles/hours in 12 round trips in the morning with an hour for meals for myself and oats and hay for the horses then back to work at 1:00 with another 12 rounds (12 miles) till 5:00-5:30. The silence was unreal and you could see the eyes of the seagulls following the new furrow (field mice). There would be 5 to 10 gulls following. I started full-time plowing in my sophomore year 1943 until school started in September. Dad did not buy a tractor until 1946. So I got lots of silent miles . Fortunately the horses would stay in the furrow and I could sleep the weekend dances off for about 5-10 minutes to a round. The horses would stop at the end of the field. I only fell off once when I hit a rock.
I believe that when they broke up the sod they used a three horse team as that was a hard pull. Life for the old-timers was hard!!!
PS. We had one of those plows on our farm to plow the garden and plant potatoes. That’s where I got my limited experience with the walking plow.”
NOTE FROM DICK: I did not know the terminology. On closer look at the photo, I think the second plow (the one at right) also had a moldboard.
There followed a brief ‘back and forth’ between Melvin and I:
Dick:
I am guessing that [Grandpa] Ferdie [Busch] did the sharpening. He was ALWAYS in that shop in the shed by the barn. Last time I looked the forge was still there. One of these trips I’ll find the building has collapsed. It was the original granary, and one of the first buildings constructed on the property.
Stories like this one from you are rapidly disappearing from the memories of the olden days. I’ve been saying to folks that people in my age range – I was born in 1940 – are the last generation who will have any memories whatsoever of old time ways in farming or anything else. Our kids generation has no reference points at all. There has been a huge change, and if/when we go back to the primitive days of back then, none of us will either know how to or be able to cope.
Melvin:
I can’t really tell which one of the plows was the SOD BUSTER without seeing them but the difference is noted and they each had a specific use, once the sod was plowed the SOD BUSTER was not needed again.
I don’t know if you remember seeing the old steam engine below the house [I don’t], but [Mel’s cousin, and my Uncle] Art and I would spend hours around that old thing wondering if it would ever run again. You are very right in remembering that old shop of your grandfathers, it was truly a trip into the past with all the old tools in use at the turn of the century. And I remember very well watching dad [August Berning] and uncle Ferdie casting a babbit bearing for one of our old pump engines and cranking the old forge blower to heat the charcoal.
Dick:
I don’t recall the old steam engine you mention. Doubtless in my meanderings as a kid I came across it when we visited, which was quite often, but it would have had no more meaning to me than those plows. Things like the horses and chickens and the menagerie (geese, pigs, etc.) got far more of my attention.
I asked Mel what I thought was a stupid question: since the plow was designed to dig into the soil, and didn’t have any mechanical lifts or such, what did they do to get the plow to the field in the first place? Very simple: they put the plow on its side and it was simply dragged along the ground till it was to be used. It was a “duhhh” moment for me, trying to render something very simple into something complex.
(Click on photo to enlarge it.)

The Busch farmstead from the south, summer, 1907. The first field to be plowed in 1905 was likely where the people are standing. From left: Frank Busch, Lena Berning, Fred Busch, Wilhelm Busch, Rosa Busch and her and Fred's first child, Lucina.

COMMENTS:
Ellen Brehmer: Very interesting. Yes, we need to record our experiences. I’ll try. My wonder is this – “What is a moldboard?” Is it to mold the furrow or did the ground have mold? [look at right, here] I really liked hearing about the silence. These days there is always something electrical running; fans, heaters, not to mention radio, TV, stereo and even flourescent lights have a noise. It may be essential to the massive physical labour these guys were capable of.
https://thoughtstowardsabetterworld.org/wp-content/uploads/2022/04/thoughts-300x138-1.jpg 0 0 dickbernard https://thoughtstowardsabetterworld.org/wp-content/uploads/2022/04/thoughts-300x138-1.jpg dickbernard2011-10-28 16:26:572011-10-28 16:26:57#462 – Melvin Berning: Heritage. On Plowing before the advent of Tractors.
0 replies