Today is the last day of the 2011 Renaissance Festival in suburban Minneapolis MN.
Friday’s local news brought a story about a fire at the Festival. Several food vendors shops burned to the ground. The fireman being interviewed said that they were hampered by the fact that they had to truck in water to fight the fire: there are apparently no fire hydrants on the grounds of this seasonal event.
No modern fire control measures on-site: that’s very renaissance, even medieval.
It happened that the Renaissance Festival had come to mind recently, as I had come across an old strip of negatives which were unidentified, and I took them in to get a few prints to hopefully date the strip.
It turned out that the pictures were taken in late summer of 1977, and four of them were taken at the Twin Cities Renaissance Festival that year (remaining photos at the end of this post, click to enlarge.) 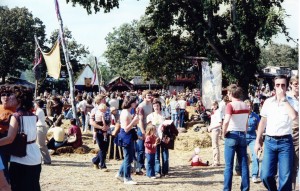 Though I have no “evidence”, I can remember being at the first Renaissance Festival, at the then “new town” of Johnathan MN in 1971. The Festival really expanded when it moved to rural Shakopee some time thereafter, and we usually joined the throng in those early years.
Being the Renaissance Festival, the event was frozen in time. It ends today, and until I saw the news had no particular thought of going out there, but maybe we’ll make the trek across town just cuz of the news combined with those old photos.
As part of the news program, one shop owner whose nook survived the fire, noted that a concrete wall between his and the other establishments probably saved his business. That’s very un-Renaissance.
In the real Renaissance times, indeed, much, much more recently in even recent history, a fire would have meant the end of the entire complex or town.
We’ve moved beyond that, with fire departments, and communities who fund such public services with taxes.
Thankfully for those folks who have businesses at the Festival, fire rigs with water could save most of them.
And how about that little girl in the first photo (above)? She’s likely now over 40. One would bet that the vendor preparing that turkey leg back then, and today as well, is fettered (and helped) by this-or-that governmental regulation to keep everyone’s food safe…. 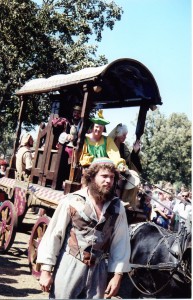 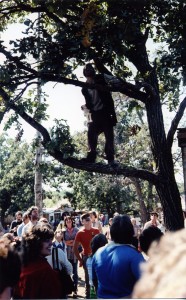 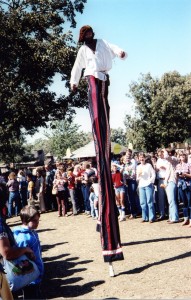