The specific intention of this blog post is not to define the problem; rather than to encourage serious dialogue among people of differing political minds. Directly related posts here; here; and here.
Six years ago I was completing the family history of my mother’s family. By then I had already spent 25 years delving into the roots of both my mother and father, and I knew well that family history is much like American History, or World History: someone decides what that “history” is; it consists of what those in power agree can be told; and it leaves out much of the most interesting – and often most relevant – parts of the story.
I decided I needed to somehow address the obvious, and I put together a single page – 113 in the book – titled “Sex Religion Politics” and how the ‘no talk’ rule tends to rule the conversation. The entire page is here: SexReligionPolitics2005001. A few days later the book was published, ironically coincident with Hurricane Katrina devastating New Orleans and the Gulf Coast. At the time we were in the early years of the Iraq War, which we had presumably ‘won’ two years earlier in early May 2003; and the political gulf, already wide, had become a chasm.
Stay away from Politics if you wanted a civil gathering.
If you’re reading this you’re interested in the topic, and you may know whether I’m in your own circle or not.
Regardless of ‘truth’ (a truly elusive concept, even if you or someone else thinks they know the ‘truth’) I think it is helpful to at least create a framework for possibly discussing this whole business of our political world. After all, we are facing an uncertain future in about as radically a divided society as we have experienced in many decades. At least it appears divided, from the political and pundit and pollster class.
For consideration and conversation I offer this.
Years ago I did a rough sketch of how I saw the political world of people in general. It is illustrated below, as I sketched it at the time (click to enlarge).

Yes, this is a rough sketch. In the sketch the height of the vertical axis represents intensity of feeling and action. The horizontal axis represents left, right and center. It speaks for itself.
Recently I read an interesting variation on this description, which caused me to seek out what turned out to be called a “truncated cylinder”, which looks like this: 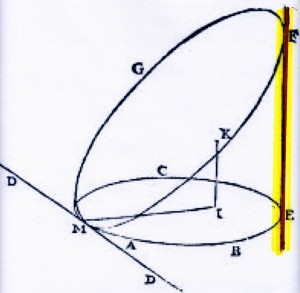 This cylinder represents the political ‘scrum’ as described by a professor of Jeremy Powers, someone on one of my internet conversation groups. This is how Jeremy described it:
“I had a college political science professor who taught that the political spectrum was not a flat line, but a circle. And most of the people are inside the circle, rather than on it, as we all have beliefs that run contrary to standard liberal or conservative thinking. The further you get to one extreme it starts to circle back to the other extreme. Libertarians, for instance, inhabit both the extreme left and extreme right of the spectrum.
I think this is just a reality of the professor’s teachings.”
Blending the professors description* with mine, basically both have the intensity of left and right, but ironically (and perhaps even logically), the left and right (vertical axis E-F) have far more in common than either would like to admit, even if they hate each other. Most of us just swim around, too many of us clueless, somewhere within the circle. Not healthy.
Agree or disagree, it’s something to talk about.
And talking is urgently needed if our society is ever going to heal and move forward.
UPDATE
* – The professors description (I don’t know the name of the professor and thus can’t acknowledge him or her) turned out to be different than I had assumed. His illustration is below (click on it to enlarge). At the same time, I believe my ‘model’ also is legitimate. The extremes of both left and right have many traits in common, differing, of course, in what they want. 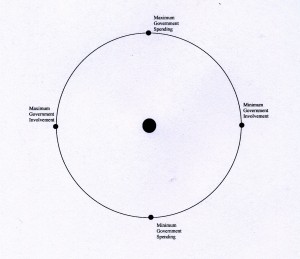