Note from Dick Bernard: I know Barry Riesch from nine years involvement with the Minnesota chapter of the national organization Veterans for Peace. Barry served in the U.S. Army 1968-70 and was a Mortar man in Vietnam 1969-70. Barry has been the inspiration for an ever more successful Memorial Day commemorative at the Vietnam Memorial on the Capitol Grounds in St. Paul. The photo is from the most recent gathering in May, 2011 (click on it to enlarge). I am proud to be a member of Veterans for Peace.
This post is also comment #36 here. 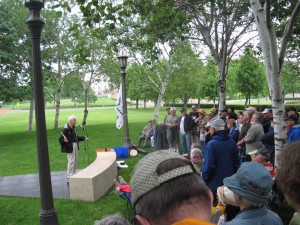 Barry Riesch:
While it is important to take time to pause and reflect on the horrible events which occurred on September 11, 2011, it is also time to ask ourselves whether the price we and the world has paid as a result of the path our leaders chose to follow has been worth it.
I offer a few of the consequences: Loss of Civil Liberties; Loss of any real privacy with the establishment of massive security surveilance system with 850,000 Top Securty officals and contractors (as reported by the Washington Post and printed in the StarTribune); compromised America’s basic principles (like Habeus Corpus and the right not to be tortured); undermined our economy; weakend security; a conservative estimate three years ago of $3-5 trillion (not counting our latest excursion into Libya); 6,000 dead soldiers and 100,000 wounded, many suffering from multiple amputations, brain injury, and post traumatic stress (PTSD); 50% of returning veterans receiving some sort of disabilitty payment; 600,000 treated in veterans facilities (estimates of future disability payments and health care costs $600-900 billlion); social costs reflected in veteran suicides (which have topped 18 per day in recent years); traumatized children and family breakups; first war (Iraq) in history paid entirely on credit card thanks to Bush; unemployment and deficit, both threats to America’s future traced to wars in Afghanistan and Iraq; increased defense spending and Bush tax cuts are largely why we went from a fiscal surplus of 2% GDP when Bush was elected to is perilous deficit and debt position today; direct government spending on those wars amounts to roughly $2 trillion- $17,000 for every US household, with bills yet to be received increasing this amount by more than 50%; macroeconomic weakness (disruption in the Middle East has led to higher oil prices thus forcing Americans to spend more on oil imports than on buying goods produced in the US); US Federal Reserve hid weaknesses by engineerig a housing bubble that led to a consumption boom which led to excessive indebtedness in real estate; Bush tried to undercut war costs by refusing basic expenditures for military (armored and mine-resistant vehicles and adequate health care for returning veterans); more than a million Iraqis have died directly or indirectly because of the war, even the most conservative studies say at least 137,000 civilians have died in Iraq and Afghanistan, 35,600 in Pakistan; among Iraqis alone there are 1.8 million refugeess and 1.7 million internally displaced people, a total of 7,800,00 war refugees and displaced persons- equivalent to the people of Connecticut and Kentucky fleeing their homes; both US invasions were to help restore Democracy but both now have more segregation today by gender and ethnicity.
Not all the consequences have been disastrous, as much of the Global War on Terrorism has been wasted on weapons that don’t work against enemies that don’t exist and now those resources are likely to be redeployed and the US will likely get more security by paying less.
These few examples of the price paid in getting to this point in the US and elsewhere have been enormous and mostly avoidable. These mistakes will be with us for a long time, maybe someday we will try a different approach. Not all of this can be attributed to George Bush as Barack Obama has continued to carry out the same policies.
*sources of information Brown University
https://thoughtstowardsabetterworld.org/wp-content/uploads/2022/04/thoughts-300x138-1.jpg 0 0 dickbernard https://thoughtstowardsabetterworld.org/wp-content/uploads/2022/04/thoughts-300x138-1.jpg dickbernard2011-09-14 06:12:042011-09-14 06:12:04#434 – Barry Riesch: Reflections on 9-11
1 reply