We live in the lower-priced end of our suburb which pretty consistently ranks as one of the best places to live in the U.S. Monday we were at one of the busiest intersections in our town and saw a new sign next to a local liquor store: 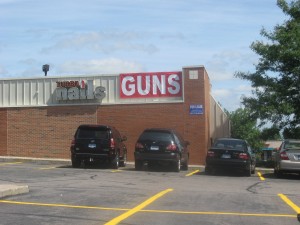 In the Minneapolis paper today an interesting bulletin directly related to the Shutdown. This brought some on-line repartee between friends about beer riots ending the Shutdown, constructing an OK Corral for gunslingers, and on and on. Sometime you need to take a timeout for the sake of sanity.
In an understated way, at least to this point, we are well into the world of ‘crazy’ in Minnesota, with the situation in Washington and in neighboring Wisconsin not far behind. The voters – those who cast ballots, and those who didn’t bother to show up to vote in 2010 – have brought this on themselves.
But it is a hard sell to convince people that they are cause in this matter of political disaster. It is much easier to label “politicians”, or some amorphous “them”, or “liberals” or such as the problem. We will rue the day.
Quite by accident, this day, I scored a ‘twofer’.
A Letter to the Editor I had submitted a couple of weeks ago to the local paper will be published this day. It speaks of my local Senator and Representative, newly elected Freshmen Republicans, who have, best as I can tell at this point, been loyal supporters of the till-death without compromise shutdown ordained by their party leadership. Our Representative, a prim and pleasant suburban homemaker, distinguished herself mostly in this session by a liberalization of gun laws (probably without much personal enthusiasm, but it came out of her committee and I doubt she had much choice in whether to vote the issue up or down. I’ll think of her each time I see this gun shop in our high-class town.)
The war continues.
Earlier today I had the totally unexpected opportunity to be one of five speakers representing the DFL (Democratic Party) about the Minnesota shutdown at this point in time.
My remarks to four tv cameras and several journalists for public release are below and are not necessarily distinguished, but that isn’t what I noted about this exercise.
When given the opportunity I had to distill my thoughts into a very brief presentation (here DFLSCStatementJul132011), and in the process try to represent the totality of hundreds of thousands of Minnesotans who in one way or another share my demographic (senior citizen) and political point of view (Democrat). Believe me it is not easy. Luckily, the timeline was so short that no one could or did look over my shoulder and insist on modifications or veto what I was going to say. It is me, trying to represent my demographic, which I think I know pretty well. I needed to try to distill how I saw the very large number of people I was representing. Afterwards I got some very sincere compliments. I got some silence, too, which probably meant ‘too soft’, or you shouldn’t have said THAT. Such is how it goes. (Update July 16: if interested in seeing my two seconds of fame, it’s here, about five minutes into Almanac on the local PBS affiliate.)
We are a bitterly polarized society, and unless we figure out how to work with rather than against each other our slide downhill is going to accelerate.
And, by the way, I have great respect for the President of the United States, and the Governor of Minnesota, trying to get people together in a most troubling time. 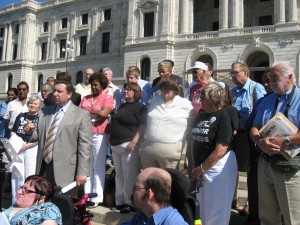